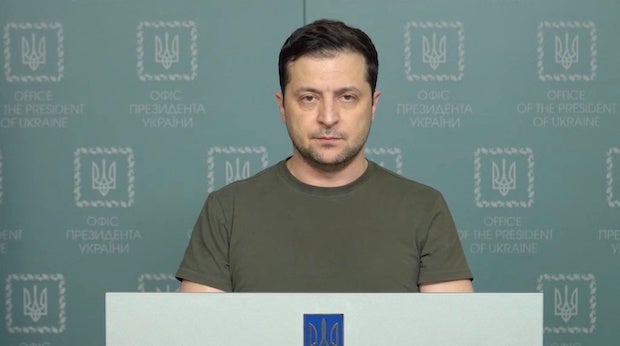 KYIV — Ukrainian President Volodymyr Zelensky said on Tuesday Russia must stop bombing Ukrainian cities before meaningful talks on a ceasefire could start, as a first round of negotiations this week had yielded scant progress.

Speaking in an interview in a heavily guarded government compound, Zelensky urged NATO members to impose a no-fly zone to stop the Russian air force, saying this would be a preventative measure and not meant to drag the alliance into war with Russia.

Setting out his conditions for further talks with Russia, Zelensky told Reuters and CNN in a joint interview: “It’s necessary to at least stop bombing people, just stop the bombing and then sit down at the negotiating table.”

Just as he was speaking, news emerged that a Russian missile had struck a TV tower in the Ukrainian capital. Earlier on Tuesday, missiles struck the heart of the eastern city of Kharkiv.

Ukraine has received weapons shipments from NATO members to help withstand a full-scale military invasion unleashed by Russian forces last week, while the West has also introduced swingeing sanctions on the Russian economy.

But Zelensky has urged the international community to do more, including imposing a no-fly zone. He said, however, that US President Joe Biden had personally conveyed to him that now was not the time to introduce such a measure.

Ukraine has pressed NATO to accelerate its entry, a move fiercely opposed by Russia and cited as one of Moscow’s reasons for launching its campaign.

“Our partners, if they are not ready to take Ukraine into NATO … because Russia does not want Ukraine to be in NATO, should work out common security guarantees for Ukraine,” Zelensky said.

“This means that we have our territorial integrity, that our borders are protected, we have special relations with all our neighbors, we are completely safe, and the guarantors that give us security, they guarantee this legally.”

Zelensky, 44, was unshaven and wore a simple khaki T-shirt, trousers, and combat boots for the interview, which took place in a government compound, heavily guarded by the military.