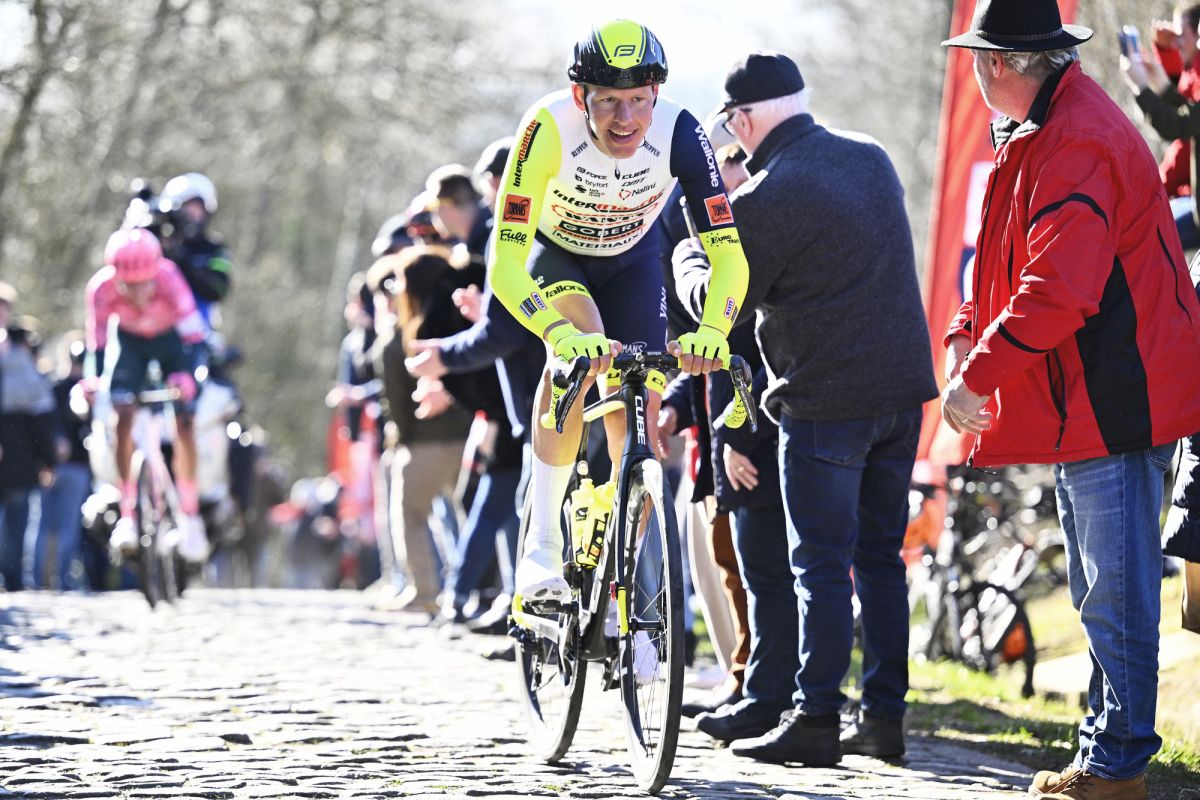 Not often does 10th place finisher warrant contention for the ride of the day, but Taco van der Hoorn‘s outing at Kuurne-Brussel-Kuurne is certainly an exception to the rule.

A member of the day’s first breakaway of seven, the Intermarché-Wanty-Gobert rider managed to navigate the day’s turbulence as his group swelled to 17 when strongmen such as Tiesj Benoot, Tom Pidcock, and Kasper Asgreen broke clear from the peloton in what appeared to be the race-winning move.

However, when the group was caught with less than 20km to go, Van der Hoorn went once more, attacking in a trio alongside Christophe Laporte and Jhonatan Narváez, a move which was only overhauled in the race’s final metres.

“With 50 metres to go, I was thinking second, nice!” Van der Hoorn told reporters after the race, referencing a likely inability to compete with Laporte’s fast finish. “But then they come and ‘ah shit’.”

Van der Hoorn also admitted that his preparation for this race has been a plan two or three months in the making — the kind of groundwork usually reserved for a much bigger race.

“I planned already in December or November to go in the break here, to go with the first group. I was thinking to try to go in the hill zone, and then maybe 10 or 20 guys come to me and try to ride to the final. It’s also the reason I didn’t ride yesterday, so there was already a plan for a long time.”

“It went pretty well, but in the end, the result wasn’t possible,” concluded the surprisingly upbeat Dutchman.

Dressed in a time trial speed suit, aero helmet, overshoes and mitts, while stood over his Cube Litening aero bike with its bars turned inwards, the Dutchman spoke of the tactics that were laid out months prior, but also of the aerodynamics testing undertaken this week to dial in his position and equipment.

“I did a test on Monday and Tuesday — aerodynamic testing — so I knew for sure what the fastest setup was, so I chose it for this. I was riding from the start in this setup, and that was the plan.”

The Dutchman also outed himself as a fan of Graeme Obree, the ex-pro and World Hour Record holder, confirming that a picture of the Scot hangs in his home.

Obree is famous for his innovative approach to the sport, regularly finding new and more aerodynamic positions and equipment and having his fair share of run-ins with the UCI’s rulebook. Van der Hoorn, meanwhile, is also good friends with Jan-Willem van Schip, who has formed a similar reputation to Obree, having previously made headlines with his use of narrow handlebars and wild Speeco concept bars.

It’s clear that Van der Hoorn shares the same innovative mind. He even went to the lengths of taping the vents shut on his helmet when he won stage 3 of the 2021 Giro d’Italia from another long-range breakaway.

Today might not have worked out how he wanted, but with the spring Classics now underway and the opportunity for more long-range attempts, others might think twice before letting him go in the early break.

“That I was still able to react to the attack of Narváez and Laporte after such a long day in the front was an incredible performance,” he concluded. “The victory was within reach and that was what I was aiming for.

“It was such a bummer when the peloton caught us with 50 metres to go, this was a very good opportunity to win a classic. I want to recover well for Le Samyn now, the next ‘red ccross’ on my agenda.”