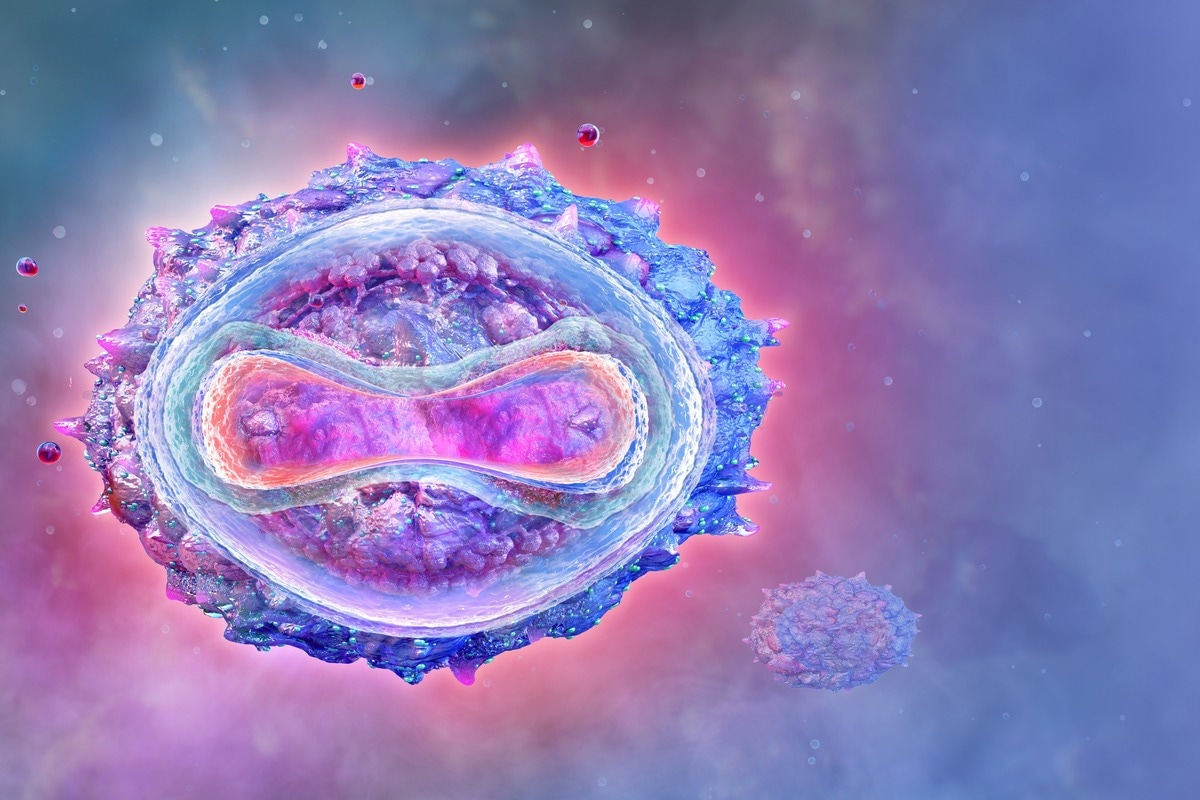 In a recent study published in the official journal of the Spanish Society of Chemotherapy, researchers assessed the existing information regarding monkeypox infections.

What is a poxvirus and what are its characteristics?

The poxvirus family comprises a group of complex and double-stranded deoxyribonucleic acid (DNA) viruses that have the capability to replicate within human cells and are characterized by their structural, antigenic, and genomic aspects. The eight vertebrate poxvirus genera include Avipoxvirus, Leporipoxvirus, Capripoxvirus, Orthopoxvirus, Molluscipoxvirus, Parapoxvirus, Suipoxvirus, and Yatapoxvirus.

The poxviruses include the Variola virus or the human smallpox virus which was declared by the World Health Organization (WHO) as eradicated in 1980. Other poxviruses that can infect humans are the cowpox virus, monkeypox virus, Akhmeta virus, and the vaccinia virus.

In contrast to other viruses, the mutability of poxvirus is much lower as compared to that of other ribonucleic acid (RNA) viruses like the influenza virus or severe acute respiratory syndrome coronavirus 2 (SARS-CoV-2). However, these viruses are very virulent and can efficiently evade and invade the immune system. Research conducted on these viruses is primarily due to the potential usage of some viruses like the Variola virus which is used as a biological weapon against specific infections.

Monkeypox infection and its clinical manifestations

Monkeypox patients are usually aged between one month and 69 years, including 90% of the patients who are aged less than 15 years. The clinical manifestations are similar to those observed in smallpox infections. Lymphadenopathy is a symptom that is found in the initial phases of the monkeypox infection and is considered an important differentiation between monkeypox and smallpox.

The team noted that clinical manifestations in monkeypox infections were detected after an incubation period lasting five to 21 days. This incubation period is usually characterized by rash, fever, and swollen lymph nodes. Moreover, it is usually considered to be a self-limiting disease that lasts for almost two to four weeks. Severe cases are found more often among pediatric patients and are commonly associated with the degrees of viral exposure, the patient’s health status, and the nature of symptom complications. The team also found that skin lesions were often reported by the patient on the face and the extremities but not on the palms and the soles of the feet. Complications in MPVX could include secondary infections and deep abscesses.

Tecovirimat is a drug that has potent activity against several orthopoxviruses such as smallpox, MPVX, vaccinia, cowpox, camelpox, and mousepox viruses. It inhibits the orthopoxvirus V061 gene that encodes for an envelope protein that is responsible for the production of an extracellular virus. The drug can also inhibit the formation of plaques as well as the cytopathic effects elicited by the virus.

Tecovirimat is effective as an antiviral drug in various animal species and has shown high activity against orthopoxvirus infections. Its efficacy is found to be consistent even if the drug is administered a few days after viral inoculation in animal models used to assess poxvirus infections. The antiviral activity of the drug is synergistic with drugs like cidofovir.

One of the first vaccines against smallpox was developed from material sourced from bovine smallpox pustules. The vaccine virus was subsequently replaced with attenuated smallpox strains to facilitate mass immunization of individuals before smallpox was eradicated. Furthermore, a vaccine that was developed with a non-replicating strain which is approved for vaccination against monkeypox, as well as smallpox, could be employed for use among immunocompromised individuals.

Overall, the study summarized that effective drug therapies have been developed against pathogens like the monkeypox virus. Furthermore, individuals vaccinated against smallpox have been reported to be efficiently protected against monkeypox infection. The researchers believe that isolation measures recommended by the health authorities are important to curb the transmission of the infection.