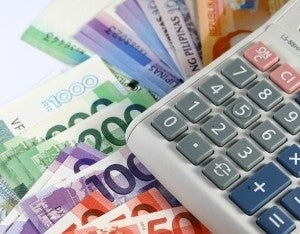 MANILA, Philippines—Higher interest rate payments due to bigger debts incurred amid the prolonged COVID-19 pandemic could make it difficult for emerging markets—like the Philippines—to implement fiscal consolidation or narrow its budget deficit and repay obligations, the Institute of International Finance (IIF) said.

The Development Budget Coordination Committee (DBCC) had programmed a fiscal deficit of P1.43 trillion, or 6.1 percent of gross domestic product (GDP) for 2022.

The Philippines ended 2021 with a record P1.67-trillion budget deficit, equivalent to 8.6 percent of annual GDP — also a historic high — as the government spent more to fight COVID-19.

The national government’s expenditures hit a record-high P4.68 trillion last year, equivalent to 24.1 percent of GDP, although actual disbursements were 1.3-percent below-program due to interest-payment savings.

The IIF noted that the Philippines and Colombia were “still spending more than usual.”

Pre-pandemic, the Philippines’ yearly budget deficits were only about 3 percent of GDP. The IIF added that emerging markets were “paying more interest given higher debt levels and rising interest rates.” The Philippines’ outstanding debt climbed to a new high of P12 trillion in January and would remain above the 60-percent debt-to-GDP threshold by end-2022.

“While good for debt sustainability, we remain skeptical that these plans are universally compatible with social and political stability,” IIF said.

The Duterte administration’s economic team—led by the Department of Finance (DOF)—will turn over to the next President a fiscal consolidation plan, which may include new or higher taxes, spending cuts on non-priority sectors, and economic growth drivers to enlarge revenue collections.

The Inquirer had reported that the National Economic and Development Authority (Neda) Board—chaired by President Rodrigo Duterte—wanted to prioritize productive infrastructure spending to avoid wasting money on non-essential projects.

The Neda Board defined well-prepared public investment programs and projects as those that had “complete submissions” and were “fully compliant with existing rules and regulations” of implementing agencies.

The government will also prioritize projects and programs forming part of its approved master plans or national and regional investment plans, the Neda Board added.

Given local government units’ (LGUs) bigger budgets with the implementation of the Supreme Court’s Mandanas-Garcia ruling in full swing this year, the Neda Board ordered national government agencies to no longer endorse, approve, or finance programs covered by LGU functions under the Local Government Code.

“All other projects not satisfying any of the above conditions are deprioritized and will only be evaluated upon submission of a strong justification and endorsement from the chair of the respective cabinet cluster,” the Neda Board said.

The board noted that Neda received 192 proposals totaling P2.4-trillion worth last year and in 2020, “some of which are not aligned with approved government plans.”

The Neda Board blamed the COVID-19 pandemic for “significantly reducing the national government’s fiscal space”.

The health and socioeconomic crises inflicted by the pandemic jacked up the annual debt-to-GDP ratio to a 16-year high of 60.5 percent and the full-year budget deficit to a record 8.6 percent of GDP in 2021.

“In the next 10-40 years, Neda projects a P41.4-trillion total cost to the present and future society due to foregone consumption, and reduced physical and human capital investment and returns in 2020 alone,” said the board.

“This massive loss is due to stringent quarantine measures and the resulting reduction of productivity from the closure of face-to-face schooling, sicknesses, [and] premature deaths, among others,” it added.

The Philippine economy suffered from its worst recession in 2020 when GDP shrank by a record 9.6 percent, no thanks to one of the strictest COVID-19 lockdowns in the region.

As such, the Neda Board said the government needed to prioritize public investments in human capital — particularly education and health — as well as infrastructure to not only recover from the long-term scarring effect of COVID-19 but also generate “good” jobs and accelerate economic growth.

The Neda Board oversees the interagency Investment Coordination Committee (ICC) and the Committee on Infrastructure (InfraCom), which had been tasked with evaluating the fiscal and monetary implications of big-ticket national projects, especially infrastructure, to be pitched for the President’s final approval.