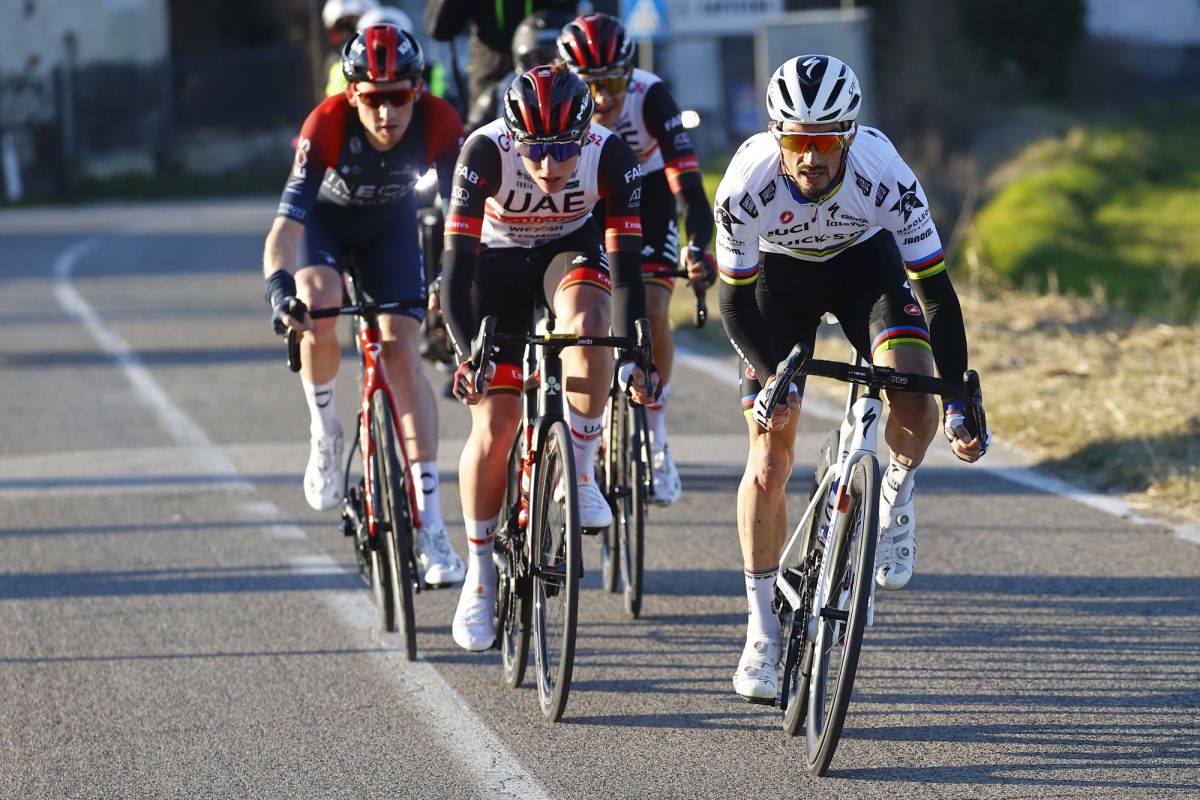 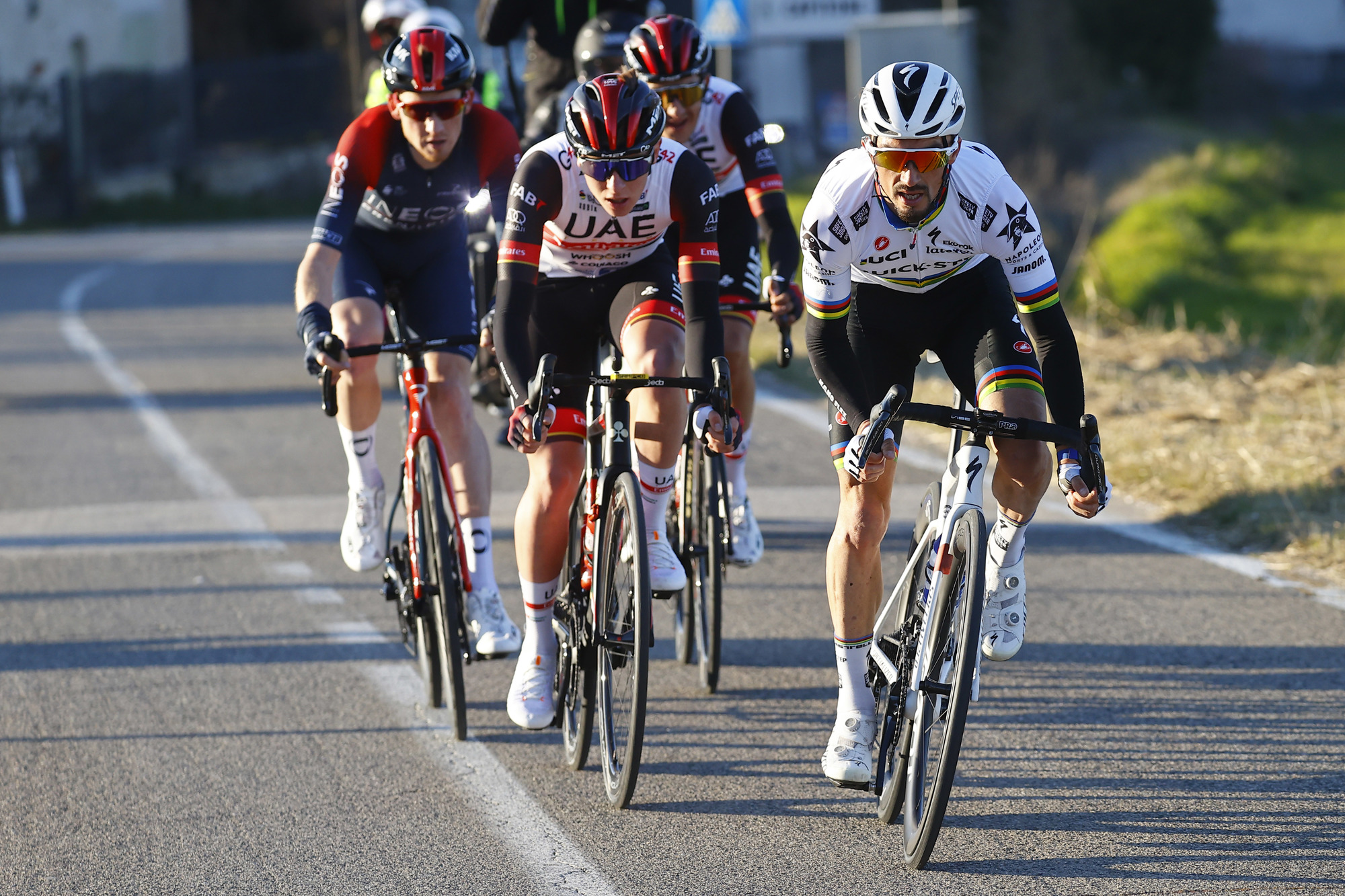 Tadej Pogačar made his intentions clear for a second consecutive stage at Tirreno-Adriatico on Wednesday, going on the attack in the final 30 kilometres to again sweep up three bonus seconds at the day’s intermediate sprint and move closer to the overall race lead.

The Tour de France winner jumped away on a late climb in the Umbrian town of Amelia 27 kilometres from the line, and then kept up the offensive after the sprint, scaring the sprinter’s teams for 15 kilometres and perhaps landing a psychological blow on overall rival, QuickStep-AlphaVinyl leader Remco Evenepoel.

Yet the young Belgian seemed to call Pogačar’s bluff, opting not to go with him, instead sending teammate Julian Alaphilippe in the attack. However, Pogačar then counter-bluffed and drove the attack along with UAE Team Emirates teammate Marc Soler, Alaphilippe and Tao Geoghegan Hart (Ineos Grenadiers).

They were eventually swept up by the sprinter’s teams 10 kilometres out, with Pogačar finishing 23rd behind stage winner Caleb Ewan (Lotto Soudal). His haul for his attack was just the three bonus seconds, but the significance of it all was far great and far more fascinating.

“It wasn’t planned to attack,” Pogačar tried to suggest, despite his teammates riding on the front to bring the early break back before the intermediate sprint.

“We caught the break and there were three second on the road, so we took the sprint. We had a gap, good riders up front and so we tried our best.”

Pogačar did accept that the attack was a sign of what to expect on the hilltop stage in Bellante on Thursday and in Fermo on Friday, and especially during Saturday’s mountain stage over Monte Carpegna.

“The next days are hard, with a lot of small hard climbs, so for sure it can be something like this,” he said, before dashing to the warmth of his team bus.

Earlier in the day, Pogačar had premeditated his attack by warning that every second counts against Remco Evenepoel – and anyone else who wants to challenge him at Tirreno-Adriatico.

“If you have a chance, you take it. That’s cycling,” he said of his attack on Tuesday, which garnered a one-second time bonus.

“It’s a fun race. We were there, we went for it, and we got it, it’s more than welcome. I will try not to throw away any seconds.”

Pogačar is racing aggressively to try to pull back the seven seconds he lost to Evenepoel in the opening time trial, snatching back four of them so far. He is now only three seconds down on his biggest rivals and only 14 seconds behind race leader Filippo Ganna (Ineos Grenadiers).

Thursday’s first uphill finish in Bellante will surely only intensify the battle for every second, specially on Evenepoel, be they bonus seconds or actually gaps on the climb to the finish. It should be a thrilling finale and first real head to head, shoulder to shoulder clash between Pogačar and Evenepoel.

The final four kilometres of the stage rise at seven per cent, with a hairpin bend at just 750 metres to go. There will surely be a sprint out of the hairpin all the way to the line as riders fight for the stage victory and for the 10-6-4 seconds awarded to the first three riders to the line.

Pogačar said that he fancies his chances against Evenepoel on the uphill finishes and everyone else.

“I don’t know if I’m faster than him on those kinds of finishes, I’ve never raced with him. We will have to see in the next few days who is faster,” he predicted with enthusiasm.

“It’s not just Remco – there are a lot of other riders here. I cannot focus only on one guy, but have to watch all the teams. But I am pretty excited to start racing hard and to have a fight with everyone.”