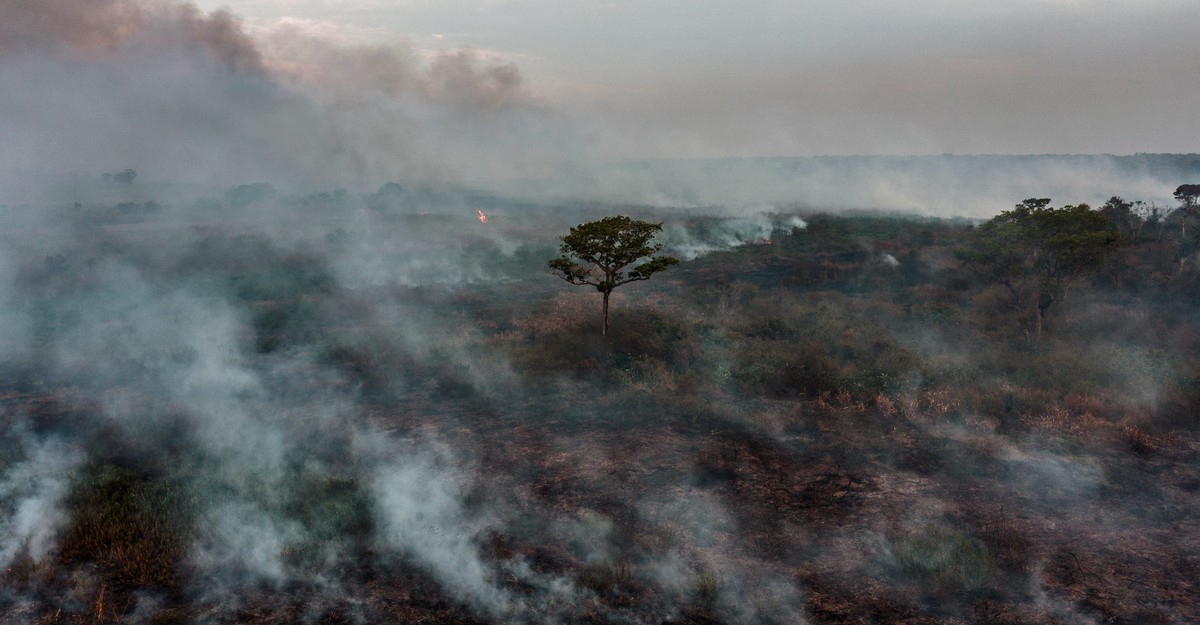 Yesterday, the Intergovernmental Panel on Climate Change published another one of its tomelike reports on the dangers of global warming. It is, it must be said, a dry and colorless document. Tasked with describing the impacts of climate change on human society and the natural world—which is to say, every living thing—as well as how humanity might adapt to those convulsions, it falls back on phrases such as “ecosystems, people, settlements, and infrastructure.” Kraftwerk was more lyrical. The style of every IPCC report is the same: It piles fact upon fact, until the picture is overwhelming.

“The cumulative scientific evidence is unequivocal: Climate change is a threat to human well-being and planetary health,” this one concludes. In order to prevent the worst impacts of climate change, humanity must begin to significantly reduce carbon emissions during its “brief and rapidly closing window” to do so.

If countries do not begin to limit their carbon pollution, then global warming could outpace our ability to adapt to it. At this point, that conclusion might seem obvious, and if the IPCC had a different job to do, perhaps it could simply assert: You get it by now. No more reports. Just do something! Its assignment, though, is to be a definitive compilation of human knowledge, so its scope has only grown. Technically, this report and the last one, which came out in August, are linked: They form Volumes I and II, respectively, of the Sixth Assessment Report on Climate Change. Volume I looked at the physical and scientific basis of global warming; this update examines its effects on human society and the natural world. A third volume, about how to stop climate change, is due out this spring.

The character of climate change’s impacts on human society is coming into greater focus. Although this report is more than 3,500 pages, it reaches three conclusions that can be spelled out here.

First, global warming will be costly. Even in an optimistic warming scenario, the population exposed to once-in-a-century flooding will increase by at least 20 percent. Climate change will introduce new supply-chain risks, the report says, particularly for specialized commodities. It will shift fisheries and growing regions from one country to another. Even if humanity holds warming to 1.5 degrees Celsius—which would require aggressive global climate policy—the chance of maize crops failing across much of the world at the same time is increased.

Climate change is already impeding economic growth. Over the past 50 years, agricultural productivity has increased, but the authors note (with medium confidence) that climate change may now be slowing that progress down. In North America, climate change has reduced agricultural productivity by 12.5 percent since 1961, the report claims. By the middle of the century, it will be too hot to work outside many days of the year across large swaths of the world.

The economic damage will not be limited to professions that require manual labor. By the middle of the century, the skiing and snowboarding season will be shortened across much of North America. (Yes, this is really one of the findings in the report.)

And the fount of wealth—human health—will also worsen. This is the report’s second conclusion: A warmer world will be a sicker world. “Climate change has adversely affected physical health of people globally and mental health of people in the assessed regions,” the report concludes. The risks of dengue fever, a mosquito-borne viral illness, will increase on every continent except Antarctica and Australia. Chikungunya virus will also spread more widely. Viruses like the coronaviruses that cause SARS or COVID-19, which leap from animals to people, are popping up in new areas. The risk of water-borne diseases have increased in certain regions, as has the risk of toxic algae blooms. Parts of the world have gotten dustier and smokier, worsening heart and lung health.

But the type of geoengineering the report seems most concerned about is planting trees. That may be surprising. Don’t trees absorb carbon dioxide as a matter of course? Aren’t they nature’s climate solution? So they are. And planted in deforested land, they can help lower atmospheric carbon levels. But if they’re planted where other ecosystems, such as prairie or savanna, used to be, then they can degrade water quality, can hurt native plants and animals, and may not even remove carbon at all. These problems can get even worse if the trees are eventually harvested and burned for energy.

Over the past decade, scientists have gotten better at describing the human misery of climate change—the floods, the fires, the storms. Their proficiency has improved in part because these disasters have started to arrive in greater numbers. But people are adaptable; we live in homes and have technology at our disposal. Other living things are not as lucky. And this is the report’s third and final conclusion: Many of climate change’s harms are uncountable, unquantifiable, impossible to know, because they will happen in the natural world. As the planet warms, the natural world will degrade.

This is not a new idea, but still, it stands out in the report as one of the hardest effects of climate change to reverse. The most hopeful climate scenario now available is that the planet warms more than 1.5 degrees Celsius, or 2.7 degrees Fahrenheit, above its preindustrial temperature by the middle of the century—but then humanity manages to prevent “overshoot,” and its mean temperature begins to fall. But even in that story line, alpine glaciers will be lost forever, as will the mountain streams and valleys that thrive on their meltwater. Forests consumed by wildfire will not necessarily grow back in the same way that they were. And under any scenario, global warming will destroy the integrity of Earth’s natural rhythms. It will shift the timing of the seasons, meaning that migratory birds arrive at a habitat too late for a local bloom. It will weaken the function of ecosystems, making them less efficient and useful. And it will worsen water quality and plague the landscape with storms, heat, droughts, and floods.

Consider the pain so far. About half of all species worldwide have shifted toward the poles or, among those that live on land, to higher elevations. Climate change has already driven at least one animal, the Bramble Cay melomys, into extinction. The melomys, a small white-flecked rodent, lived on an island near the tip of the Great Barrier Reef. It was the reef’s only native mammal; now it is gone. Climate change also may have helped kill off the golden toad of Costa Rica’s cloud forests, which was last seen 33 years ago, and the wild population of Australia’s white ringtail possum, which perished in a series of heat waves.

These extinctions are only the beginning. Even if humanity keeps warming to 1.5 degrees Celsius, some 9 percent of species that live on land or in freshwater will likely be “at very high risk of extinction,” the report finds. In “biodiversity hotspots,” the risks to endemic species will be even higher. Coral reefs, which about half a billion people depend on for their livelihood, will suffer hideous bleaching events under almost any temperature scenario.

Nor is the standard toolbox of conservation, namely park creation, doing enough to reduce these risks. Only 15 percent of the planet’s land surface is protected, and most of it is not cared for in a way that will limit the damage a changing climate will do. An IPCC report from several years ago found that human activity now shapes 70 percent of the ice-free surface of the globe. Nature is running out of places to hide.

So climate change will make us pay. But it will also deplete the unquantifiable inheritance that is the Earth’s beauty and diversity, and bankrupt us in more ways than we can know. Given that climate change is a solvable problem, one that the United States can make a large dent in on the cheap … isn’t it time to start?