Shibani Dandekar is a self-confessed foodie and it’s visible through her social media posts. The singer and actress often connect with her fans and followers via a number of food posts. Having said that, it’s important to note that she is also a fitness freak who follows a strict diet and rigorous workout routines to achieve a toned figure. It’s truly amazing how Shibani balances her cravings and a disciplined way of living. For every foodie who follows a diet plan all through, cheat meals happen to be very special and Shibani isn’t any different. And why not, after all, cheat meals gives her a chance to relish mouth-watering food items without any restrictions or guilt.

(Also Read: Farhan Akhtar-Shibani Dandekar’s Mehendi Had This Street Food On The Menu)

Shibani recently conducted an “AMA session” on Instagram and her fans asked a lot of questions in order to know more about her. Some questions obviously included her food choices. When someone asked her, “Your all-time favourite cheat meal?” Shibani replied with a picture of a delicious burger filled with a drool-worthy patty and lettuce. With the picture, Shibani also wrote, “Once a week without fail. Sundays are for Sijo.” 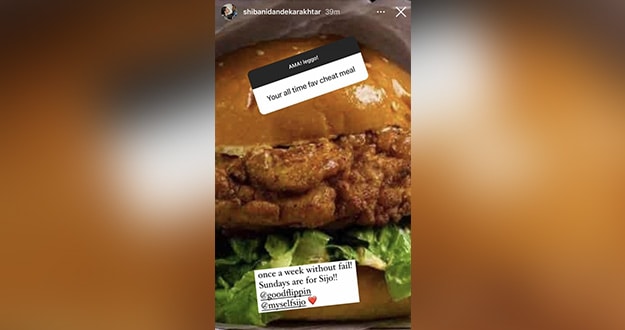 Before starting the session, Shibani Dandekar had shared an image of boiled eggs with black pepper sprinkled on top teamed with sliced avocados kept on the platter. During the session, someone asked her, “How was the egg/avocado combo?” As a reply, Shibani treated us to a plateful of her healthy meal. She wrote cheekily, “If you close your eyes and pretend it is a burger it is just awesome,” and added laughing emojis. She went on to add, “Was actually quite good.”

Shibani Dandekar seems vocal about her love for food especially burgers. Her inclination for digging in yummy burgers every once in a while is quite evident in her posts on social media. In April, we saw her relishing the same. She dropped the picture of what looked like her Sunday cheat meal. Now, that obviously featured a sumptuous burger filled with a yummy patty, cheese, and basil leaves. It looked super tempting and left us hungry. The burger was accompanied by indulgent fries kept alongside.

As much as we like Shibani Dandekar for her well-maintained figure, we also appreciate her foodie side. What was even more delightful was to see her enjoying food even when she got married. Shibani tied the nuptial knot with Farhan Akhtar in February. Her photo dump from the Mehendi function included food. Her Mehendi menu featured the popular street food pani puri. In one of the snippets, Shibani could be seen gorging on pani puri.