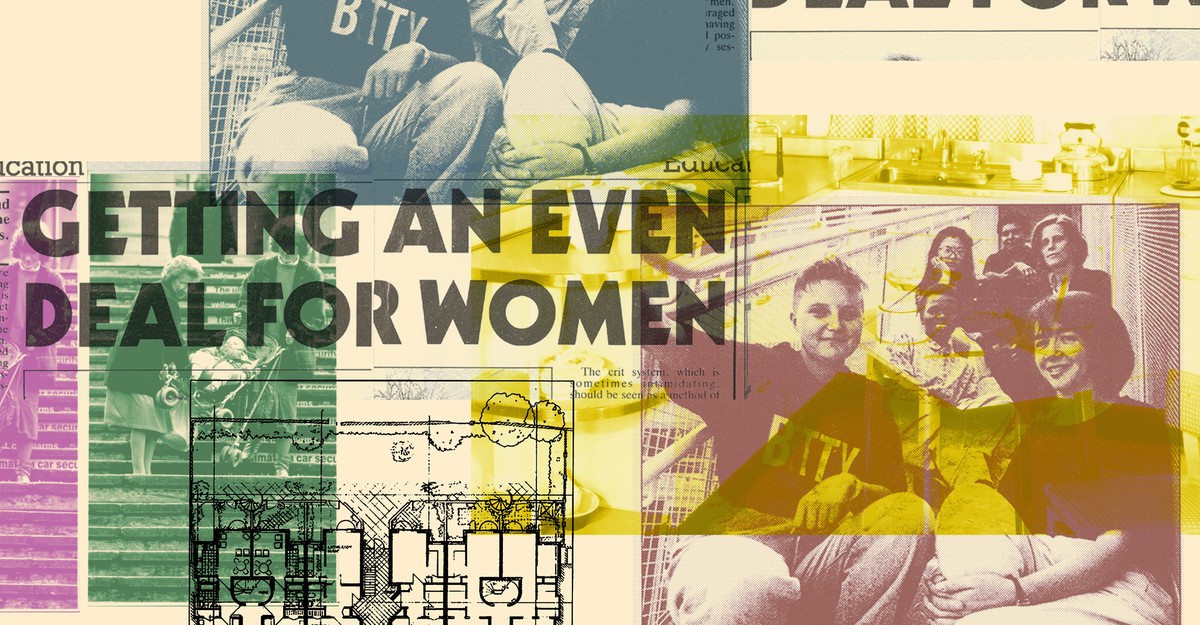 The coronavirus pandemic has challenged one of the most basic structures of life for the past two centuries: the separation between home and workplace. Over the past two years, many of us have been confined to domestic spaces that were historically constructed with the assumption that women would take care of children and maintain the household rather than work outside it. These expectations have changed, yet our homes are still gendered: We sleep in “master” bedrooms and prepare food in kitchens designed for an idealized, 5-foot-7 female body. When we think about gender equity, policy goals tend to come to mind—equal pay for equal work, protection from sexual harassment, access to reproductive health care. But we shouldn’t overlook the spaces that we exist in every day, our homes and communities—especially as the pandemic has revealed their shortcomings. Transforming these places, solidly constructed in brick and concrete, might seem difficult. But it’s been tried before.

In 1981, a group of women architects—trade-union activists, budding academics, former squatters—gathered in North London to embark on a new project. Many were members of Matrix, a feminist design collective founded in 1980, and their mission was to reimagine the “man-made” world. How could the built environment better serve women? And how could the sexism of the architectural establishment be challenged?

They sought answers by writing Making Space: Women and the Man-Made Environment, a collection of essays attributed to Matrix that was published in 1984 and recently reissued. The cover features a black-and-white photograph of a young mother dragging a stroller up a concrete stairwell, her sweaty hair falling in her face. The image sums up the book’s central argument—that the built environment has failed to respond to the needs of women, as well as those of the elderly, disabled people, and parents of young children.

In the late 19th and early 20th centuries, city planners in the United States and Western Europe introduced land-use regulations that separated residential areas from commercial and industrial zones, reinforcing the distinction between waged work and leisure, or production and consumption. Previously, work usually happened in or near the home, bringing parents and children, but also relatives, apprentices, and servants, together under the same roof. This model was supplanted by the rise of the factory system and the expansion of white-collar professions: Now, typically, men went to work and women stayed behind, rendering domestic spaces distinctly female. The exclusive domain of the nuclear family, the home became the insulated, insular setting we recognize today.

As women on both sides of the Atlantic entered the workforce in large numbers in the 1960s and ’70s, this urban framework came under scrutiny. Matrix’s concerns emerged from the women’s-liberation movement, and were nurtured by the grassroots culture of municipal socialism that flourished under the Labour-controlled Greater London Council in the mid-’80s. Its members were skeptical of the kinds of piecemeal interventions that city architects offered as examples of women-centered planning. The architect Jos Boys writes in Making Space that one design guide suggested arranging park benches in clusters rather than in a line, in order to foster social interaction. But this prescription ignored issues of safety and comfort in public space: “No woman engages unthinkingly in idle conversation with an unknown man just because he sits on a facing bench rather than alongside.” Similarly, Susan Francis, one of Matrix’s founders, noted that architects were preoccupied with how to make the experience of standing in front of the kitchen sink more pleasant. The accepted solution was a window, ideally looking onto a garden, so mothers could watch their children play outside. The real question went unanswered: “Why do women spend so much time at the kitchen sink?”

Read: The curse of an open floor plan

True change, Matrix recognized, meant empowering women at all stages of the design process—giving them the opportunity to construct literal “rooms of their own.” Backed by a grant from the Greater London Council, Matrix members offered their services as architects for free: They ran workshops for women on carpentry and technical drawing, and, as a self-described multiracial feminist collective, worked with Black, Asian, and lesbian women’s groups to design community centers and women’s shelters. Buildings, they wrote, were typically “intimidating to all except those who control them.” To help their clients overcome this barrier, they presented them with cardboard models of child-care facilities and community kitchens, and asked how they would rearrange the layouts to best meet their needs. Matrix wanted these spaces to provide safety and sociability, serving as an alternative to homes that were cramped and isolating.

Space matters, Matrix members ultimately concluded, even in the absence of sweeping social or political transformation. It still does: The experience, for many of us, of being stuck inside during the pandemic has led us to recalibrate the way we use space in the home. Working from home can dissolve the boundaries between leisure and work. But it can also reinforce existing binaries. The study, or home office, has traditionally been the domain of men. According to one survey, men working remotely are 60 percent more likely than women to have a designated home office, and report higher levels of satisfaction with their work-from-home setup. If one partner doesn’t participate in the workforce, they may lack a room of their own altogether—spending their time, in Francis’s words, in “spaces that service the family.” Many homes can’t accommodate one home office, let alone two, but more flexible design might include roomy closets that can function as “cloffices,” small workspaces outfitted with desks and lighting.

Many home layouts also prioritize public-facing areas, such as living rooms and entryways, over zones of domestic work, which are placed out of sight. This means, for instance, that washers and dryers can be relegated to the basement, making laundry accessible only by a flight of stairs. Women with families, Making Space notes, bear the brunt of “damp, inaccessible, or tightly and badly planned homes.” Because many people have spent the majority of the past two years at home, these everyday encumbrances have added up.

Matrix also suggested a solution for the most gendered room of the house: the kitchen. Here the group’s arguments display the influence of the feminist writer Betty Friedan, whose evocation of the “problem that has no name”—the 1950s housewife marooned among shiny labor-saving devices—has been criticized for neglecting the experiences of women of color and low-income women (in the 1990s, Matrix members, among them the Black architect Ann de Graft-Johnson, would focus their analysis more explicitly on race). Yet the experience of housework as isolating and monotonous is not limited to women. Despite advances in technology, the amount of housework Americans do weekly has not changed significantly over the past 100 years. Kitchens may no longer be designed to be used by only one person, as Matrix asserted in the ’80s, but in small living quarters, food preparation tends to be a solitary activity. Moreover, school closings during the pandemic underlined the extent to which some low-income families depend on free, reliable school meals—meals distributed outside the household structure.

This was the remarkable premise behind British Restaurants, a network of state-run canteens that operated from 1940 to 1947, at the height of wartime economic intervention. British Restaurants provided not only “simple meals at simple prices,” Matrix writes, but a purportedly egalitarian place in which to eat with others. Making Space’s critique of the privatization of housework can sometimes appear naive: Washing and bathing may have been communal tasks in the past, but very few people want to return to the days of shared baths. Healthy, subsidized meals, however, are a different story—something that would ease the burden of cooking every night while nurturing new forms of community.

Most of Matrix’s projects focused on creating and revamping community spaces—the canteen, the child-care facility—as an alternative to the suffocating homes whose problems they detail. But they also argued that the home itself can be a radical place, one of equality and self-expression. “I don’t believe in Ideals,” says a single mother who is interviewed at the end of the book, before listing her desired characteristics in a home—a front yard and “really large” backyard, a huge living room, ample storage. As we emerge, finally, from our cocoons, we might consider remaking not only the world at our doorstep, but also the spaces within.