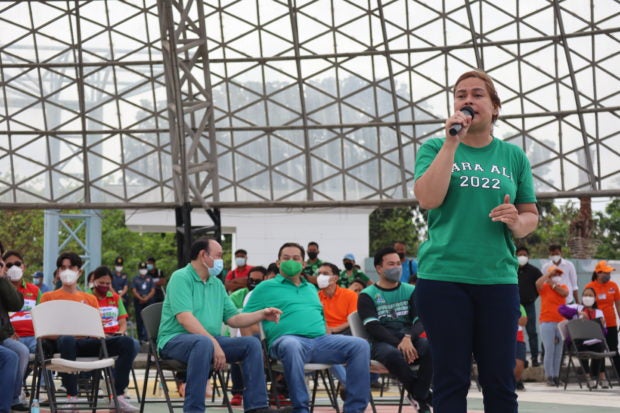 DAVAO CITY, Davao del Sur, Philippines — Davao City Mayor Sara Duterte has refused to comment about being called a “coward” by sociology professor Walden Bello, but her spokesperson, Mayor Christina Frasco of Liloan in Cebu, lashed back at her fellow presidential candidate.

She added that Duterte would no longer attend debates.

“Candidates are at liberty to decide whether or not to accept invitations to debates,” Frasco said in a statement only hours after Duterte told reporters here she would rather not comment.

“It is also within a candidate’s discretion to limit his exposure to tweets and soundbites only, as Walden Bello has done, or to have direct and personal engagement with the people, as Mayor Sara has shown this entire campaign season.”

“According to Walden Bello, Mayor Sara is a coward. But who between them is hiding from the people during the campaign?” Frasco wrote in Cebuano.

She said the mayor had already decided not to attend debates and concentrate on her campaign on the ground.

“Mayor Sara has already decided to do a campaign without attending debates,” Frasco’s statement said. “Instead, [she will] work her hardest on the ground to continue to earn the trust and win the vote of the people as the next vice president of the Philippines.”

On Feb. 26, during the CNN Philippines “Presidential Debate,” Bello criticized Duterte for not showing up at the debate hosted for vice presidential candidates, calling her a “coward.”

Later, in an interview with ABC-CBN News Channel, Bello explained that it was the “responsibility of all candidates to be able to present themselves to the people” and that debates had long been a practice of small town halls in democratic societies.

“The idea is how do you bridge the gap between the candidate and the people and somebody like Bongbong Marcos and Sara Duterte, who don’t engage in this are hiding something,” said Bello. “This definitely a very undemocratic gesture,” Bello added.

But Frasco said that “far from the convenience of preaching platitudes from the pulpit,” the Davao City mayor already visited 70 cities, towns, islands, and provinces in less than two months.

“(She has been) speaking directly to the people, listening to their problems, bringing aid where needed most,” Frasco said.

She also boasted of the mayor’s track record.

“When Mayor Sara steps down on June 30, she will have left Davao city debt-free, the 4th most competitive city in the country and the 7th richest,” Frasco said.

Sara Duterte has ‘personal reasons’ for not joining debates