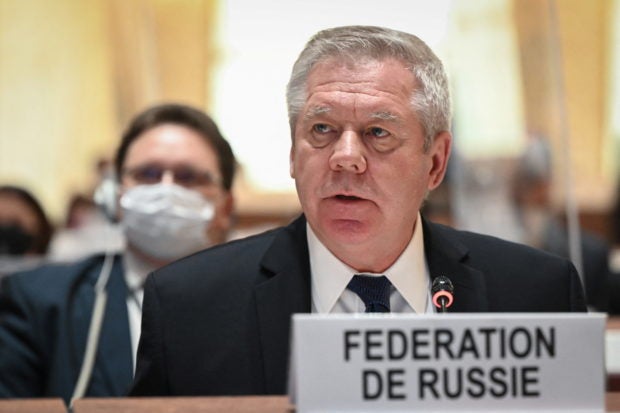 Russia sees “no desire on the part of Ukraine” to try to find a legitimate and balanced solution to the problems between the two countries, Gennady Gatilov, the Russian ambassador to the United Nations in Geneva, told Lebanese television in an interview aired on Tuesday.

Gatilov said Russia “supports diplomacy based on respect for the positions of all countries and equality, but for now we don’t see that”, the Russian news agency RIA quoted him as saying in the interview.

Russian and Ukrainian negotiators held a first round of talks on Monday following Russia’s invasion of its neighbor on Feb. 24, but made no substantial progress, merely agreeing to meet again. No date was set for a second round.

Gatilov also said the time had come to remove nuclear weapons from Western and Eastern Europe, according to RIA.

Apart from Russia, Europe’s other nuclear-armed powers are France and Britain, both members of NATO along with the United States, which possesses most of the transatlantic alliance’s nuclear arsenal and has forces stationed in Europe.

Before invading Ukraine, Russia had made sweeping demands of NATO, insisting that it reverse its eastward expansion begun after the collapse of the Soviet communist-led Warsaw Pact military alliance, and also pledge never to accept Ukraine’s request to join.