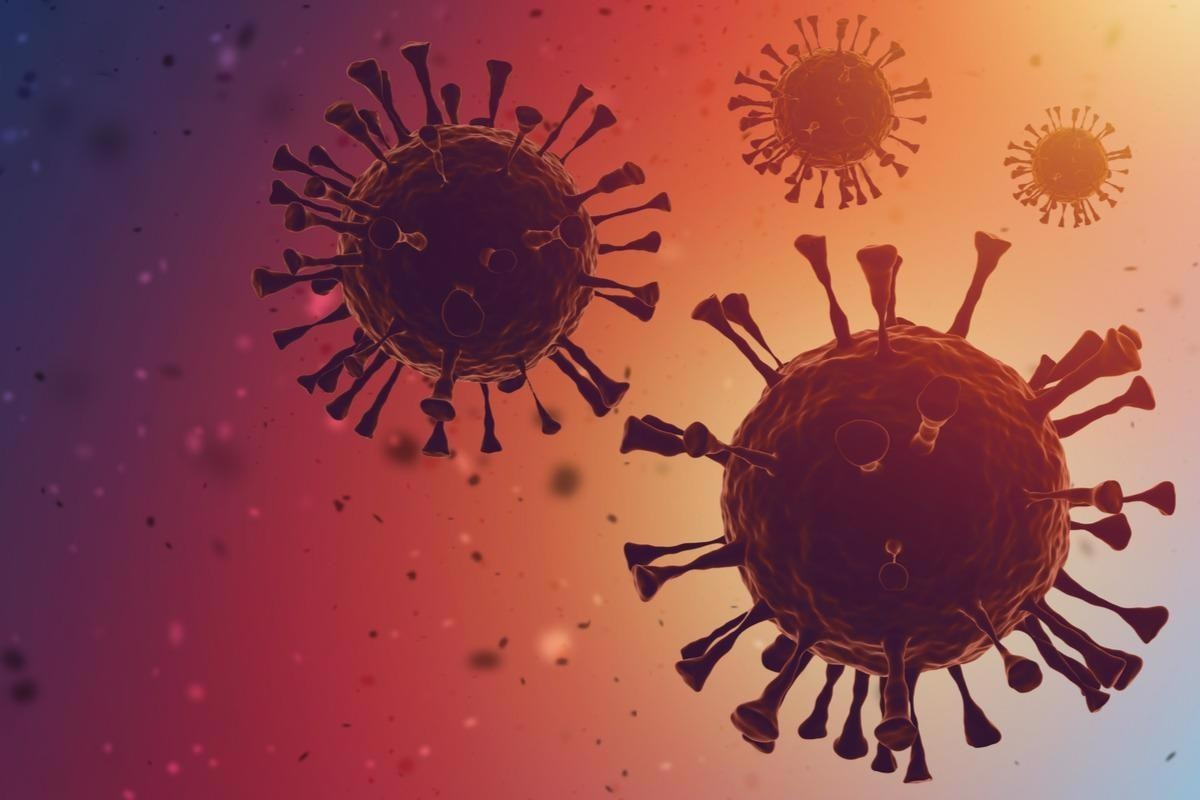 In a recent study posted to the bioRxiv* server, researchers assessed the immunogenicity of the self-developed recombinant adenovirus vector (rAd5) vaccine on macaques. They evaluated the efficacy of three candidate vaccines, ED88, ED90, and ED94, to select the most appropriate one for future development.

The rAd5 mucosal vaccine platform developed in this study has been formulated as a dried tablet to be delivered orally along with a glass of water. The vaccine has been administered to over 500 human subjects so far and has been found to elicit potent cellular and humoral immune responses to the expressed antigen and is also well tolerated.

The rapid emergence of new severe acute respiratory syndrome (SARS-CoV-2) variants of concern (VOCs) has led to global vaccine development efforts. Vaccines provide passive immunity by giving rise to serological antibodies or immunoglobulins (Ig) such as IgG and IgA. The comparative effectiveness of vaccines must be assessed to accelerate the development and clinical translation of the most potent vaccine against coronavirus disease 2019 (COVID-19).

Although vaccines have reduced disease severity, novel immune strategies are required to boost host immunity and decrease viral transmission. Mucosal vaccines generate secretory immunoglobulin-A (SIgA) in the nasal secretions. SIgA neutralizes the viral antigens at the portal of entry and site of initial inoculation of SARS-CoV-2, preventing viral dissemination in the host. To this end, the authors believe that the rAd5 vaccine they developed could be a potential therapeutic agent against COVID-19.

The researchers compared the immunogenic potential of three candidate vaccines to generate IgG and IgA against the proteins of several VOCs (e.g., Alpha, Gamma, Wuhan, Delta, and Beta). ED90 contained the viral spike (S) protein only, whereas ED88 contained the S and nucleocapsid (N) proteins effective against the Beta or Wuhan strains. The ED94 vaccine contained only Beta-specific S protein. The Wuhan S specific-vector vaccine was tested on macaques after proven efficacious and well-tolerated in hamsters and mice in Phase 1 trials.

Five groups of crab-eating macaques were immunized with the rAd5 vaccine containing S protein transgenes from either Wuhan (ED90) or beta (ED94) lineages or a blend of Wuhan S and N proteins (ED88). Four groups were vaccinated via the intranasal route with ED90 or ED94 vaccines. One group was immunized intramuscularly, followed by an intranasal ED88 booster dose. Post-vaccination, nasal swabs and serum samples were collected from all the groups. 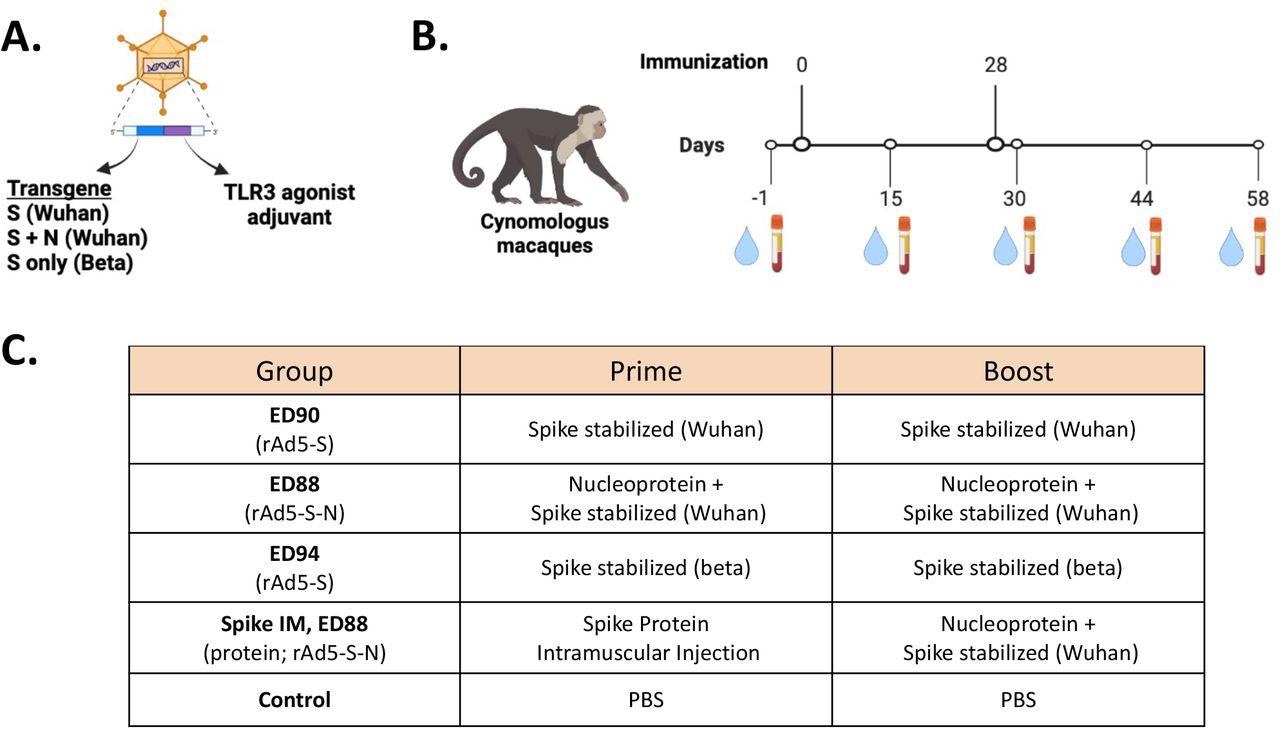 Within two weeks of single vaccination with ED90, the immunized animals had a three-fold increase in S- and RBD-specific IgG against several SARS-CoV-2 strains: Wuhan, beta, delta, alpha, and gamma. ED94 was highly immunogenic against the beta and gamma VOCs. Animals immunized with ED88 demonstrated a moderate increase in anti-S protein IgG responses. ED90 vaccination generated serum IgA specific to Wuhan, alpha, delta, and gamma VOCs but in lesser quantity than IgG. ED94 generated the highest beta-specific IgA immune responses. Antibodies against N were not detected with ED88 vaccination.

The ED90 vaccine also generated the highest serum IgG and IgA and neutralization activity against the delta strain. Neutralizing antibodies were generated within a month in all macaques in the ED90 group. In contrast, only half of the animals generated humoral immune responses two months post ED88 vaccination. The highest percentage of inhibition between ACE-2 and S protein was detected in the nasal mucosa of animals immunized with ED90 on day 58.

The rAd5 vaccine generated the most robust humoral immune protection with serum IgG and IgA against all VOCs with two ED90 doses. IgA was found to have higher neutralization activity than IgG, and no adverse events were reported in any group post-vaccination.

The study findings showed that the double dose ED90 vaccination regimen was most potent in generating cross-reactive serum IgG and mucosal IgA against multiple VOCs. Thus, the researchers chose ED90 for further clinical research and development.

The rAd5 vaccine with two doses of ED90 generated high titers of binding and neutralizing SIgA antibodies against several VOCs in the nasal mucosa, a first by any vaccine. This vaccine was found to inhibit Wuhan-specific SARS-CoV-2 entry as well as decrease delta S-mediated viral transmission. Based on the study findings, the authors believe that mucosal vaccinations may provide enhanced protection against COVID-19.