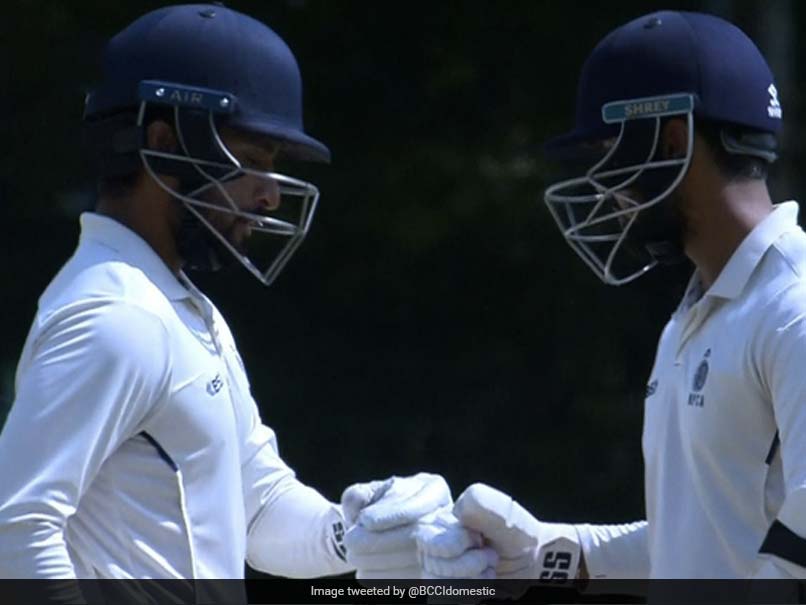 Skipper Abhimanyu Easwaran‘s unbeaten 52 after Shahbaz Ahmed‘s superb all-round show gave Bengal a glimmer of hope even as Madhya Pradesh firmly held the upper-hand on the penultimate day of the Ranji Trophy semi-final in Alur on Friday. On a difficult fourth day pitch, the India A batter looked flawless and milked the field at ease, slamming six fours in his 104-ball knock as Bengal were precariously placed at 96 for 4, needing another 254 runs to reach the stiff winning target of 350.

Madhya Pradesh, on the other hand, need six wickets in pursuit of their first Ranji final after 23 years as the match is headed for a thrilling final day finish on Saturday.

He held on to his end, bowling 19 overs non-stop to end the day with figures of 3/35 to jump to joint-second in the top wicket-takers’ list this season with Jharkhand’s Shahbaz Nadeem (25).

Giving Abhimanyu company at the other end was the old warhorse Anustup Majumdar, unbeaten on 8 from 25 balls after he was dropped down to No 6 in a tactical move.

Bengal also have a capable batter in Shahbaz waiting in the dressing room but it would be an onerous task on a fifth day pitch as the odd ball has started staying low and some deliveries turning square.

Sloppy umpiring and lack of DRS in Ranji Trophy also let down Bengal as they lost the wicket of an in-form Sudip Gharami (19) given lbw by umpire Ravikant Reddy who failed to notice the ball hitting his glove to a Saransh Jain delivery which was also out of the line.

Abhishek Raman continued his forgettable outing this season, getting out for a second successive duck — this time off the first ball — as Bengal got off to a jittery start in their stiff chase of 350.

Abhimanyu at the other end looked at ease and batted with positive intent with Gharami before his partner departed in the 12th over.

Bengal however had luck in their favour also and Abhimanyu survived on 31 when a Kartikeya delivery kissed his off stump but it was not enough to dislodge the bail.

Wicketkeeper-batter Abhishek Porel (7) was promoted to No 4 but he failed to make use of the opportunity as he was done in by one that turned in sharply.

First innings centurion Tiwary got a reprieve on six but he also could not make use of it and in his desperation to get going came down the track but failed to get proper elevation off Kartikeya’s bowling.

Earlier, it was Shahbaz Ahmed who did a star all-rounder act and became the fifth from Bengal to score a century as well as take a fifer in the same match for Bengal.

BCCI president Sourav Ganguly was the last from Bengal to achieve the feat against Maharashtra in 2005.

Shahbaz followed up his maiden first-class century (116) in the first innings with a splendid 5/79, sharing nine wickets with his fellow left-arm spinner Pradipta Pramanik (4/65).

Riding on duo’s performance, Bengal bowled out Madhya Pradesh for 281 runs in their second essay, from being overnight 163/2 and their last five batters could add only 65 runs.

Shahbaz denied his RCB teammate Rajat Patidar (79) a second hundred this season, when he trapped him plumb in-front to break the imposing century-plus overnight partnership.

In the space of four overs, the left-arm spinner cleaned up 18-year-old Akshat Raghuwanshi, fresh from his attacking half-century in the first innings.

Pradipta Pramanik then came to the fore and earned a third wicket for Bengal this morning when he dismissed Saransh Jain (11) caught by Shahbaz at silly point.