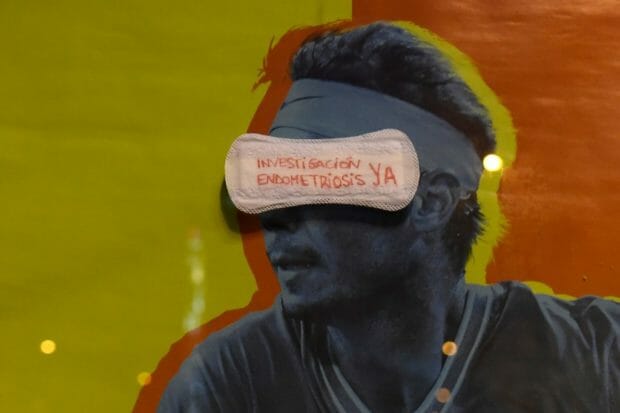 FILE PHOTO A sanitary napkin bearing the sentence “Investigation for endometriosis now” is stuck on an ad at a bus stop in Madrid on March 8, 2020 during a demonstration marking the International Women’s Day. (Photo by OSCAR DEL POZO / AFP)

PARIS — Helen McLaughlin says she was suffering so much that she would burn herself with a hot bottle “just because that was a nicer pain than the one that I was in”.

But when her medical scans kept coming back clear, the doctors in London made her feel like “there’s nothing wrong with me — it’s in your head.”

Her story will be familiar to millions because the disease plaguing her — endometriosis — is suffered by one in 10 women worldwide.

But endometriosis is so under-researched, and often takes so long to be properly diagnosed, that it has come to symbolize how illnesses that only affect women have long been ignored by a historically male-focused medical establishment.

McLaughlin was 16 when she had her first symptoms of endometriosis, where the tissue that normally lines the inside of the uterus instead grows on the outside.

When she told her GP in Britain that she was having her period every other week, he prescribed her the pill.

When she was 25 — nearly a decade after that first misdiagnosis — she started getting increasing pain after her period — “a quite intense pulling feeling in my tummy”.

A year later it had spread to her legs and she was “in pain 24 hours a day, seven days a week”.

“I had difficulty walking in and out of hospital, I couldn’t work, I was put on 25 tablets a day — just pain management.”

Change only came when a friend of hers said they had heard of another person with similar symptoms who had endometriosis.

However when McLaughlin mentioned endometriosis at her hospital, “they were really dismissive” and she was again discharged with painkillers.

“I ended up writing a three-page letter to the general surgeon just begging him” for the surgery to search for endometriosis, which neither scans nor blood tests can conclusively detect.

“That’s how I got diagnosed.”

Not a ‘pink sparkly day’

Now 37 and living in London, McLaughlin said International Women’s Day, on Tuesday, “can’t be seen as this — to use the stereotype — pink sparkly day”.

“It’s a day that needs to be taken seriously, because there is so much that affects women that just isn’t addressed in the male world.”

A 2020 British parliamentary report found that women with endometriosis waited an average of eight years for a diagnosis, despite more than half seeing the doctor over 10 times with symptoms.

A 2019 analysis of studies in the US showed it is even more difficult for women of color to get diagnosed with endometriosis.

When pain gripped her from “hip to ankle”, her family GP said he couldn’t see anything wrong with her, speculating it was gout.

“Might I ask if an attractive young woman such as yourself might be pregnant?” the doctor asked Cleghorn, according to her 2021 book “Unwell Women: Misdiagnosis and Myth in a Man-Made World.”

When informed that she was on the pill, the doctor concluded, “It’s probably just your hormones.”

After a decade of pain and frustration, a rheumatologist finally discovered the real cause: lupus.

French neurobiologist Catherine Vidal said the “so-called ‘nature’ of women, the representations of them as weak creatures, have long permeated medicine”.

Woman and girls are significantly more likely to suffer from depression than men and boys, according to the World Health Organization.

Again, hormones have been traditionally blamed.

But the WHO said gender norms that resulted in women having less autonomy, while carrying greater societal expectation, was to blame — as well as the trauma some carry as victims of gender-based harassment and violence.

Claire Mounier-Vehier, a cardiologist at the University Hospital of Lille, said another problem was that “women feel less concerned about their own health and often put it second to their family or work”.

A French survey showed women called an ambulance an average of 15 minutes later than men when having a heart attack.

A 2019 European Society of Cardiology study also found that “women call an ambulance for husbands, fathers and brothers with heart attack symptoms but not for themselves”.

“We have to stop believing that when a man collapses, he is having a cardiac arrest but that when it’s a woman, it’s a fainting spell,” Mounier-Vehier said.

‘Not just a woman’: Filipinas carve their niches, defy stereotypes

The latest tech news delivered to your inbox