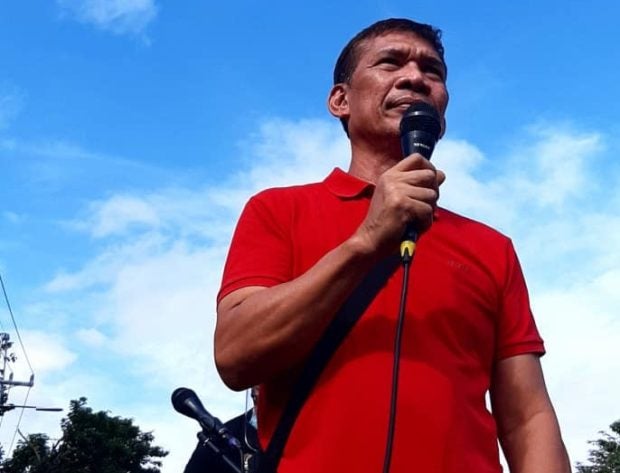 Presidential candidate Leody De Guzman: “That uprising is a result of injustices in our country.” (File photo from his Facebook Page)

MANILA, Philippines — As in previous elections, the longstanding issue of armed struggle became a heated point of discussion at a presidential debate hosted by the Sonshine Media Network International (SMNI) Tuesday night.

“But let’s recognize that we have a revolution in our country, that there’s an uprising. And that uprising is a result of injustices in our country,” he said in Filipino.

These injustices, De Guzman said, should be addressed.

“The social services for our citizens, freedom, democracy — they don’t have that. Many of our countrymen were killed. In the past war on drugs, almost 30,000 died. If things like that continue, the war in our country will also continue,” he said.

Former Sen. Ferdinand “Bongbong” Marcos quickly opposed De Guzman, saying that he could not support an “ideology” that called for an armed struggle.

Marcos stressed that government officials had the responsibility of protecting the state.

He raised the need to push for peace talks while continuing the programs of the National Task Force to End Local Communist Armed Conflict (NTF-ELCAC).

“So if there are those fighting, who want to bring down the government, the state has to defend itself and the well-being of the people,” Marcos said in Filipino.

“We can’t agree to an ideology that includes what the call an armed struggle because to change the government by violent means is rebellion, and we cannot let that happen,” he added.

Former Defense Secretary Norberto Gonzales, another presidential candidate, said that there could be a peaceful solution instead of armed struggle.

“In my view, what Ka Leody was saying is that there could be a peaceful solution. What is not appropriate is that whenever we have a misunderstanding we will use arms. That is not needed,” Gonzales said.

De Guzman argued that no one wanted an armed struggle, especially since that would mean facing off with a government with all the weapons to retaliate.

De Guzman pointed out some injustices that took place in history — including the killings during the time of late dictator President Ferdinand Marcos Sr., the father of Marcos Jr.

“In my view, no person wants to an armed fight the government in full battle gear — with complete arms, tanks, and everything else. But it came to that because the history of our country is full of oppression and the use of violence,” he said.

Marcos and Abella, in particular, also voiced support for the NTF-ELCAC.

But De Guzman said he would want to abolish the NTF-ELCAC as it had been linked to various controversies, such as red-tagging.

Palace hopes next president will keep NTF-Elcac, cites its accomplishments