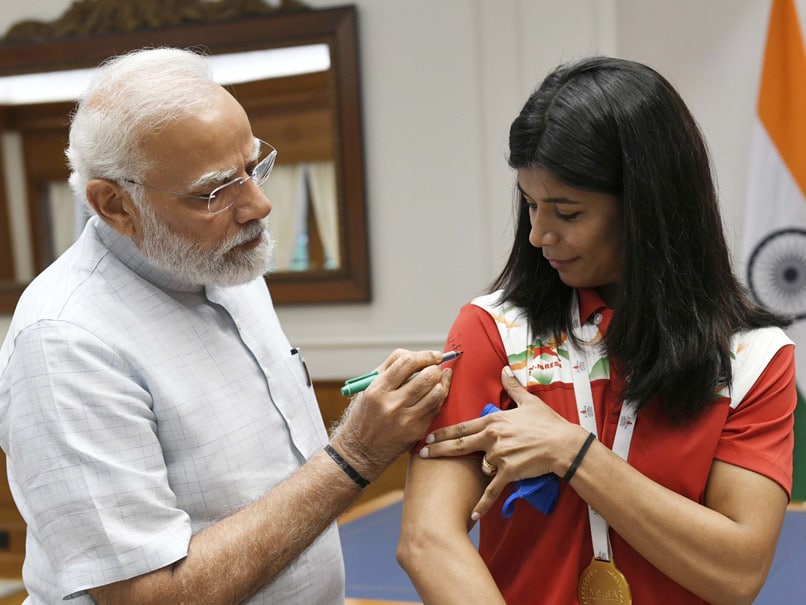 Nikhat won the gold medal in the 52kg category at the Women’s World Boxing Championship with a win over Thailand’s Jitpong Jutamas in the fly-weight final in Istanbul, Turkey. She became only the fifth Indian women’s boxer after Mary Kom, Sarita Devi, Jenny RL and Lekha KC to win a gold at the World Championships. The 25-year-old Zareen is a former junior youth world champion. Against her Thai opponent in the final, Nikhat fought with brilliance and brought home the gold medal. The judges scored the bout 30-27, 29-28, 29-28, 30-27, 29-28 in the Indian’s favour.

Nikhat took to Twitter and posted a photo with the prime minister and captioned it, “An honour to meet our Hon’ble PM @narendramodi sir. Thank you sir.”

The champion boxer came to the NDTV studios last month and spoke on a range of topics, including the tweet from Salman Khan in response to her earlier interview to the channel.

She also spoke about how she shifted her focus from athletics to boxing as she wanted to prove that even girls can take up sports like boxing.

“I asked my father why there weren’t too many women in boxing. He told me that women also do boxing but in our society women are perceived to be weak to take part in a sport like boxing. Since childhood I was stubborn and a tom boy. No one used to think that I was a girl as I behaved like boys mostly. I took that statement as a challenge and decided that I will change the mentality of the society, that we girls are strong enough to pick up such sports also. After that I discussed with my dad and we decided that I would join boxing,” a proud Nikhat said.