Last week, the Portland Bureau of Transportation (PBOT) posted its revisions to the draft Pedestrian Design Guide (PDG) which it had released for public comment in September. The new version updates the City’s 1998 PDG and is the City’s primary guidance on how sidewalks should be built throughout Portland.

Pedestrian Coordinator Michelle Marx noted in an email to stakeholders and interested parties that “the Guide underwent a robust 30-day public review period in Fall 2021 and was revised and updated in response to public comment.” A comparison between September’s original draft and the current updates shows that the PDG team did indeed make significant clarifications and changes, particularly concerning Narrow Residential Roadways (NRR), which have been a recent focus of several advocates. 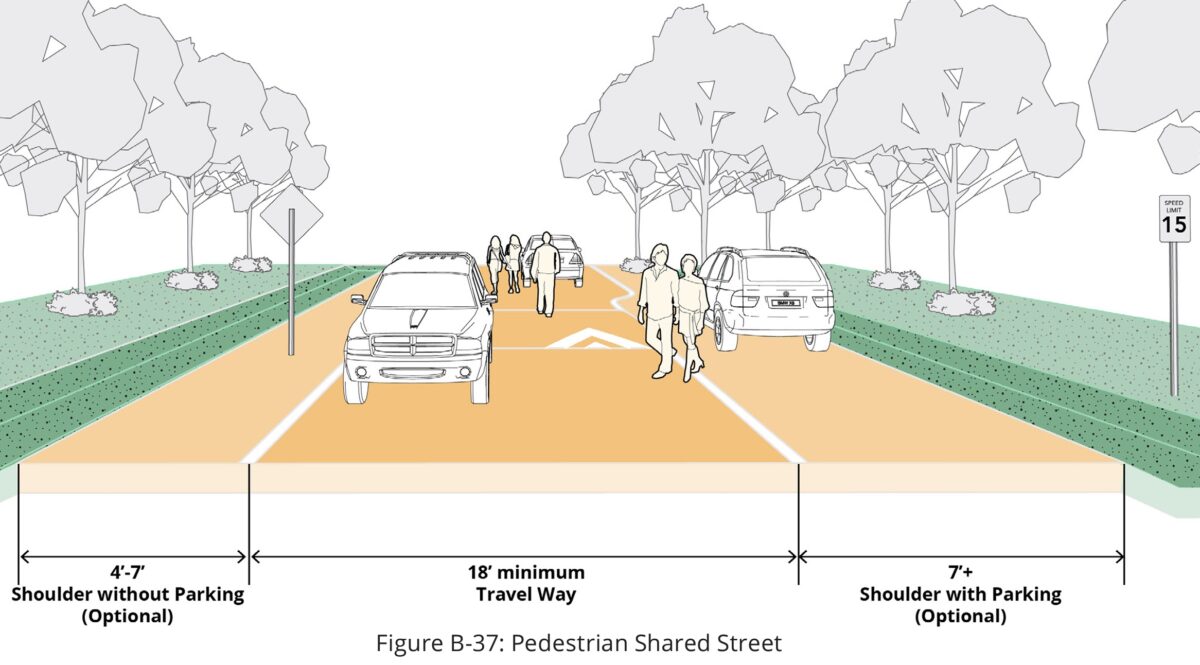 Note that “shared streets” with 15 mph speed limits can now be created wherever the “travel way” is 18 feet or less. (Source: Pedestrian Design Guide, B.5.4.3 Pedestrian Shared Street)

BikePortland readers may recall Michael Reiss from our article last year about his DIY traffic-calming endeavors. He is the man who was “ready to grab some neighbors, a bucket of paint” and paint advisory shoulders on SW 18th Place. Like so many BikePortland articles, we closed with “Stay tuned.” Well, last week Reese contacted BikePortland to update us on how things had progressed since we last spoke, and how the PDG update might help with his traffic-calming project:

I had conversations with PBOT staffers, and I was able to get a better understanding of what the various engineering/political/liability roadblocks were. In my opinion it all really came down to how the definition of the Oregon statute regarding “narrow residential roadways,” and the 18 ft width limit, was interpreted. The important questions were:

(A Narrow Residential Roadway is defined in Oregon law (ORS 801.368) as a two-way residential street which is not wider than 18 ft “measured exclusive of shoulders and/or on-street parking”. The speed limit on these narrow streets is, also by statute, 15 mph, thus the designation confers a speed limit reduction from the standard 20 mph.)

Reiss submitted a detailed comment to PBOT requesting that the use of fog lines be allowed to narrow travel ways to 18 ft thus converting technically non-conforming streets into NRR’s. He wrote to tell us that the revised PDG seems to have taken his suggestion, “an edge-lane design is now officially available to PBOT engineers!” The new language in the PDG reads:

The width ordinarily used for vehicle travel can be narrowed to 18 feet or less with painted line(s), wands, planters, and other furniture as appropriate,

Implementation is still firmly in the hands of PBOT planners and Reiss can’t just grab a bucket of paint, some neighbors, and paint fog lines on his street. But the planners Reiss is lobbying now have an important new traffic-calming tool available to them, one which is particularly relevant to southwest and east Portland, two areas of town with narrow streets which often lack sidewalks.

The new language seems like a win for Portland and a wonderful example of the bureau listening to — and using! — comments from the community to arrive at better outcomes.

In addition to his conversations with PBOT staff, Reiss also discussed the issues with Portland attorney (and BikePortland supporter) Scott Kocher. Kocher has been advocating for reduced speed limits for several years. Concerning NNRs, he told BikePortland last year, “I think there’s a huge opportunity here…Even if the pavement on your street is wider than 18 feet, it can be striped with a fog line, or furnished with planters, benches, etc. that limit the ‘used for vehicular travel’ portion to 18 feet.” He also pointed out that what is known as our local “20 mph” ordinance actually requires the city to reduce speed limits by 5 mph below the statutory limit in residence districts. When that local ordinance is applied to the statutory 15 mph of NRRs “it means that we can achieve 10 mph on many more streets at low cost.”

We will have to wait to see how widely PBOT implements the NRR clarifications in the PDG, but for now the new language seems like a win for Reiss and Kocher, a win for Portland, and a wonderful example of the bureau listening to — and using! — comments from the community to arrive at better outcomes.

Lisa Caballero has lived in SW Portland for 20 years. She is on the Transportation Committee of her neighborhood association, the Southwest Hills Residential League (SWHRL) and can be reached at [email protected]