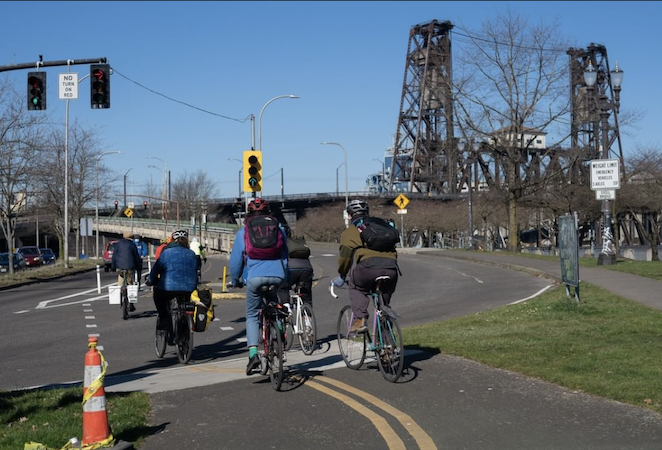 This past weekend, Bike Loud PDX and a staffer from the Portland Bureau of Transportation (PBOT) led rides on the west side through neighborhoods like downtown, Slabtown, Nob Hill, the Pearl and into the Northwest Industrial Area.

I tagged along on the Friday afternoon ride (they did a repeat tour Sunday) and had a great time checking out projects I’ve spent time reading about in various city planning documents but had never actually seen first-hand. Since I live in on the other side of town, this isn’t an area I find myself in as often as I’d like. 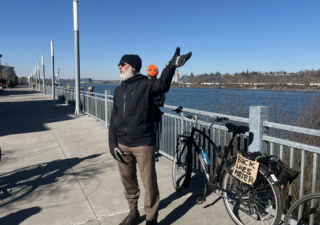 Bike Loud chapters around the city have been doing monthly policy rides for several months now. Past rides hosted by the West chapter have featured PBOT staff members Gabe Graff, who talked about the Central City in Motion plan and Senior Transportation Planner Nick Falbo, who talked about street seats and plazas. This time around the PBOT staffer was Bicycle Coordinator Roger Geller, who’s been in the city’s bike planning department since the 1990s.

Geller’s ride and talk focused on Portland’s Bicycle Plan for 2030 and how it’s coming to fruition in Northwest Portland. 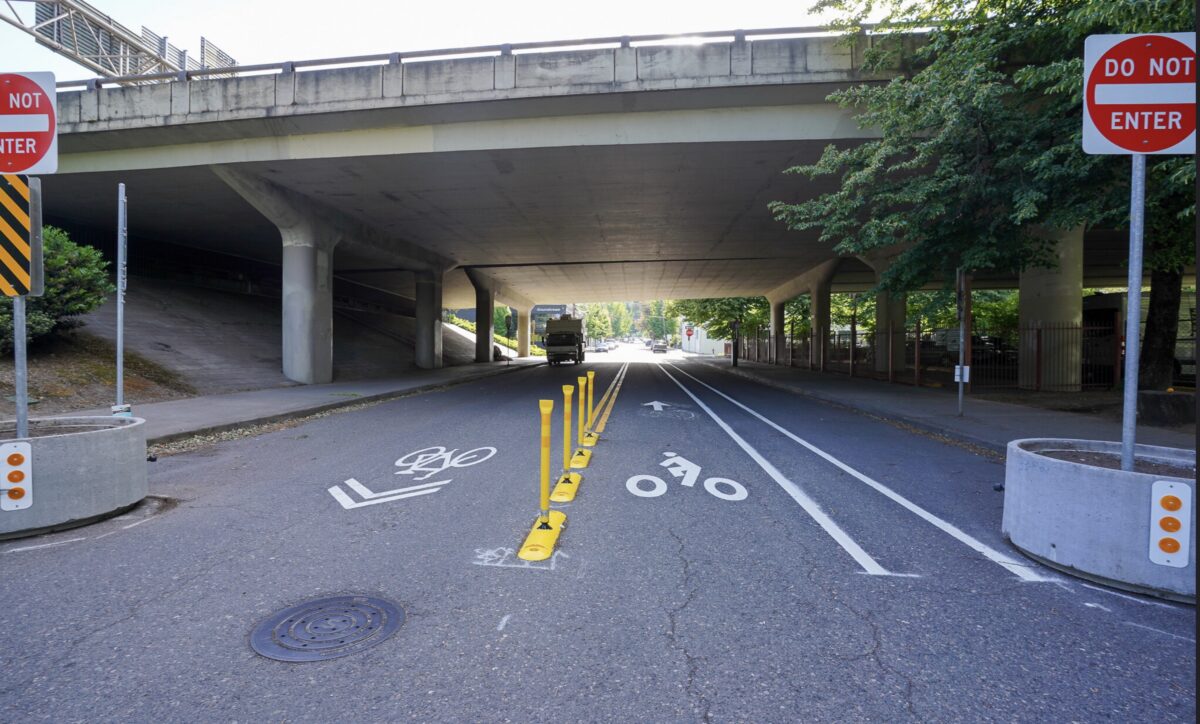 NW Johnson under I-405 is one of several greenways being developed in northwest.
(Photo: Jonathan Maus/BikePortland)

We met up downtown at Director Park before heading out, first heading east toward the waterfront, where Geller pointed out upcoming projects on Northwest Naito Parkway as it turns into NW Front Ave. The group consisted of eight people, some of whom – like Tuttle and Holden Regnier, a Bike Loud volunteer who says he’s helping organize the West chapter – are immersed in the bike advocacy world.

“Ideally, what you want is for people who live in this district to be able to walk out their door and say, ‘oh, biking exists here.’”
— Roger Geller, PBOT

I had my friend Patrick Riley, a cycling enthusiast new to the world of transportation policy advocacy, come along. I was interested in finding out what he’d think of diving into some nitty-gritty city planning topics through a policy ride like this.

One of the projects Geller highlighted was to extend the Front Avenue protected bike lane from where it currently ends at 19th Ave to NW 21st or NW Nicolai. This would help provide a better connection into the Northwest Industrial Area and be another step in reaching the area’s cycling potential.

Geller said he thinks it’s important for cycling to become more visible in this area so people know it could be a viable means of getting around the neighborhood. “Ideally, what you want is for people who live in this district to be able to walk out their door and say, ‘oh, biking exists here,’” Geller said.

I would’ve felt a lot more hesitant to cycle in this area had I not been with a group of other people, but it was cool to see how an area that is so car-centric now could become a cycling haven.

When we passed the NW Johnson St neighborhood greenway, Geller talked about the city’s plan to beef up urban greenways downtown through Northwest in Motion. He said these greenways located in the densest parts of town can require a lot of upkeep and traffic diversion maintenance to ensure they’re able to stay safe for people walking and biking.

When we rode across Couch Park on NW 19th Ave and Glisan St and Geller pointed out the fact that, one on side of the park, there’s a curb ramp for people rolling to get onto the street, but on the other, it just drops off.

Geller identified the bike lane on NW 19th Ave as a specific example of how he thinks PBOT is demonstrating bike transportation as a priority. The transportation bureau thinks the Northwest in Motion plan can double bike usage in this dense part of town, and Geller said projects like these show that goal coming into fruition.

“The fact that this bike lane exists here today reflects our policies becoming much stronger in promoting biking as transportation,” he said.

In the end, I found the policy ride to be a great format for learning about projects and being able to actually imagine the purpose they’ll serve when completed.

Riley says he thought it was a way for someone new to bike policy to get their foot in the door in an engaging and informative way.

“The main thing that was cool to me was seeing the individual human guide behind that kind of infrastructure and realizing that it’s just people making those decisions and trying their best to improve a place,” Riley says. “After hearing about the things in the works, now I want to know how they develop!”

Tuttle says the Bike Loud West chapter is thinking about doing other focused policy rides on topics like bike parking, biking and homeless encampments, and safe routes to school. The next policy ride on the west side will be in March led by PBOT Signals, Intelligent Transportation Systems (ITS), and Street Lighting Division Manager Peter Koonce.

Stay tuned to our calendar for ride details once they’re confirmed.