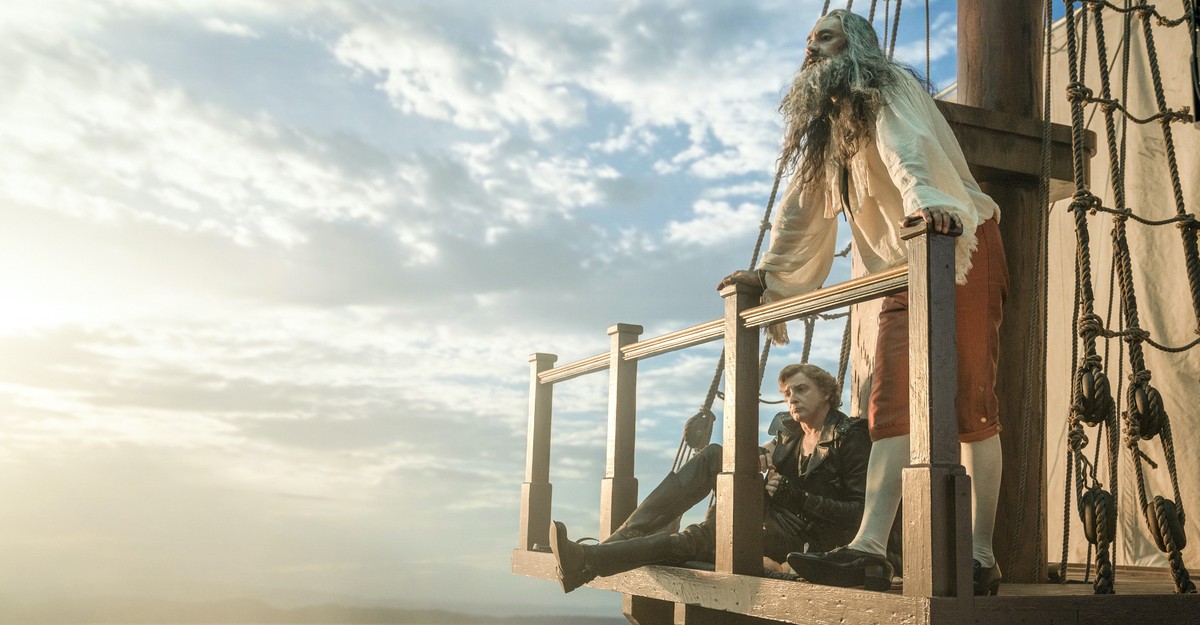 When a man and a woman on TV share an umbrella, and the man asks the woman if she’s happy in her relationship, the romantic implications are usually clear. When that happens on ABC’s Abbott Elementary, the teachers Janine and Gregory have obvious chemistry. Through small gestures, lingering glances, and hints at Janine’s dissatisfaction with her current boyfriend, the show has established the beginnings of a classic will-they-won’t-they scenario. Audiences know what’s happening because the story beats are so familiar.

But for same-sex pairings, it’s not so simple. Scenes that could be interpreted as romantic are frequently revealed to be merely friendly or platonic in nature. And because the proliferation of out, loving queer relationships on TV is a fairly recent development, most viewers tend to assume that characters are straight until they are proved, on-screen, otherwise. Even if tension exists between a possibly gay couple over multiple episodes, queer viewers in particular can still worry: Am I just imagining this?

Watching Our Flag Means Death, the wildly popular HBO Max comedy that just finished its first season, I at first felt that familiar fear. The series follows a fictionalized version of the real-life 18th-century pirate Stede Bonnet (played by Rhys Darby), who leaves his affluent life, his wife, and his children to seek adventure on the high seas. The first three episodes document his bumbling failures until, in the fourth episode, he meets Edward Teach, a.k.a. the famous Blackbeard (the wonderful Taika Waititi), and they go from enemies to allies to something more. To my surprise, Our Flag Means Death turned out to be a perfect example of how to tell a slow-burn queer-romance story on TV.

The show isn’t subtle about the sparks between its two leads, but many queer viewers who were watching in real time were rightfully wary of expecting innuendo to lead to onscreen intimacy. Will-they-won’t-they arcs depend on drawn-out ambiguity, and the jig is up when the pair acknowledge their feelings. In Our Flag Means Death, when Stede tells Blackbeard, “You wear fine things well” and Blackbeard takes a hesitant step forward in the moonlight, the scene is straight from a romantic comedy—but just enough goes unsaid that you’re left wondering.

On a story level, that’s good; you’re not supposed to get the big kiss too early. But for many fans, the suspense of waiting to see if a queer attraction will be acknowledged on-screen is anxiety-inducing. In fact, Our Flag Means Death’s creator, David Jenkins, told IndieWire that his audience was “very afraid” that the central relationship wouldn’t materialize, even after they watched that pivotal moonlit scene. “I didn’t realize how deep that [fear] ran,” he said, shortly after the finale was released. “People are picking up on it, but they don’t actually believe that we’re going there.”

Queerbaiting—playing up queer romance, but always under a veneer of plausible deniability, and with no intention of payoff—is nothing new on TV. Gay culture and aesthetics have long been extremely appealing to the mainstream. But homophobic laws and sentiments still have broad support in America, and television sometimes seems afraid to commit to LGBTQ stories. When Netflix’s Regency romance Bridgerton recently returned for a second season, it dropped any facade of Benedict Bridgerton potentially being gay or bisexual, despite the fact that he flirts with a gay artist in Season 1. The move felt egregious to many viewers, especially those who remembered an early trailer that falsely implied gay romance would be more prominent on the sex-heavy show.

Our Flag Means Death handles television’s legacy of letting LGBTQ viewers down by making the show undeniably queer, even if Stede and Ed initially don’t appear to be. It introduces multiple characters whose LGBTQ identities and relationships are treated as unremarkable in their milieu. When the ferocious first mate Izzy Hands catches the crew members Black Pete and Lucius hooking up, he’s angry not because he’s homophobic, but because they’re slacking off. When another crew member, Jim, starts using they/them pronouns, their comrades quickly and easily accept them as nonbinary—and Jim gets a moving romance with their best friend, Oluwande. As for Stede and Ed, their friends and enemies alike remark on their chemistry before they themselves are even aware of it. In one scene, Lucius watches Stede pick food out of Ed’s beard and whispers, “Oh my God, this is happening.” And the show gives viewers an onscreen kiss in the penultimate episode—before leaving their future in question by the finale’s end.

Other slow-burn gay romances have managed to avoid queerbaiting. Over the three seasons that FX’s fantastical What We Do in the Shadows has followed the misadventures of a useless group of Staten Island vampires, a deeper connection has blossomed between Nandor (Kayvan Novak), an inept bloodsucker, and his devoted human familiar, Guillermo (Harvey Guillén). That pairing is a true unresolved will-they-won’t-they, developing over time through throwaway lines and comedic beats. But What We Do in the Shadows has been overt about its main characters’ queerness, even if they don’t use labels. Viewers at least know that whatever is keeping Guillermo and Nandor apart, it’s not the show’s reluctance to say gay.

Our Flag Means Death is the opposite of queerbait: It’s a love story told over a season where the narrative constantly affirms that the romance being teased is real. But imagine what television could pull off in a future where LGBTQ lives and stories are less stigmatized. Imagine the narrative possibilities for tales about queer romance if viewers can trust that they’re getting meaningful looks from the start, and not just settling in for seasons of endless yearning.