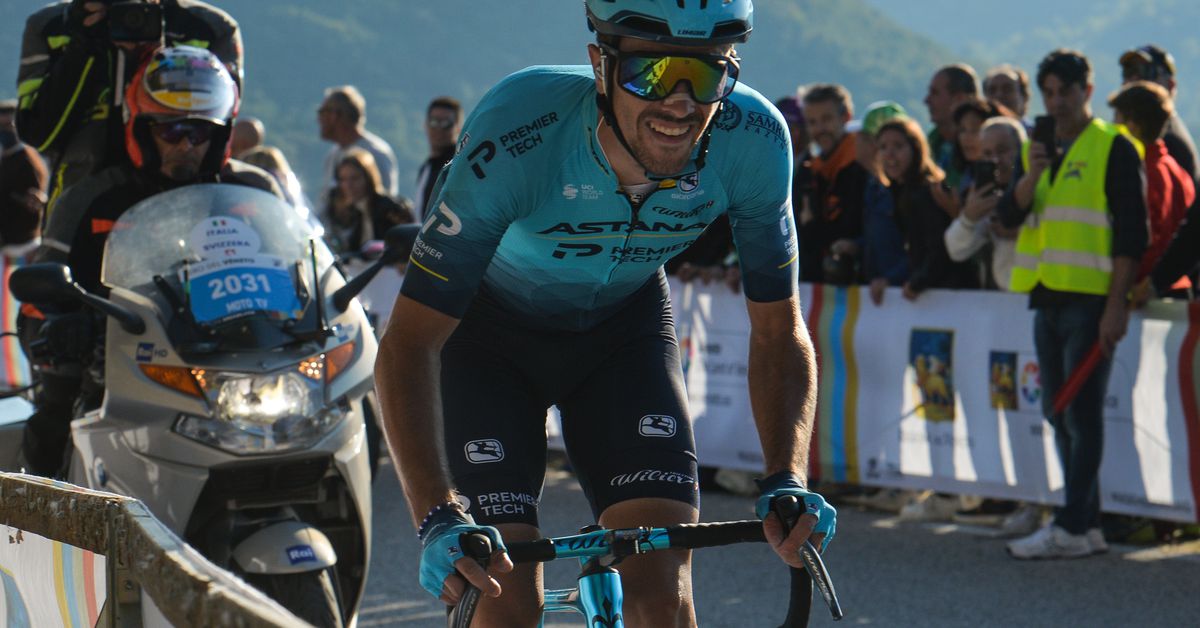 Seizing on my newly rediscovered motivation to blast out Offseason Capsules — you can blame my cratering interest in the Boston Celtics for clearing my calendar — I am going to keep moving through the sport’s middle class, stopping off today at Team Astana Qazaqstan.

The people of Kazakhstan are on my mind of late, not something I have ever said before, but as Russian troops “drop by to help out with a civil unrest problem” in Almaty, it’s not a great moment for a country which hasn’t had a lot of great moments lately. So with a measure of sympathy for the people whose flag is flown at the World Tour as though the Kazakhs themselves get to enjoy the Tour de France same as us, let’s look into their team.

To be frank, Astana haven’t been fun to talk about for a while. The Astana team was born in 2007 from the ashes of Manolo Saiz’ Liberty Seguros project, which then became Astana-Wurth, with Alexandr Vinokourov as their lead rider. If this all sounds a little shaky in hindsight, believe me, it seemed shaky at the time, and Vino wasted little time confirming our suspicions by getting tossed (with his team) from the 2007 Tour for evidence of a homologous transfusion. The rest of those early years were tied mostly to Vino, and then Alberto Contador and finally Lance Armstrong, all of which was as terrible as it sounds. Being a state-sponsored team from the former Soviet Union did nothing to help, and Vino’s return as a team manager after he hung up his bike continued the image of Astana as a team to worry about. Only last summer did the team finally try to move on from Vinokourov, firing him before bringing him back, which prompted its other title sponsor Premier Tech to jump ship for Israel-StartUp Nation. From what I gather, Vino is still hanging over the team in some capacity, which includes “ominous black cloud” on the list of his functions.

Some things do change, or attempt to anyway. In place of Premier Tech, possibly a sign of their inability to recruit a second sponsor, the team is now Team Astana Qazaqstan. The spelling of Kazakhstan has been changed to a different (but still apparently official) romanized spelling. Astana is named after the capital city — literally it means “capital city” — except the city itself is now called Nur-Sultan, taking the given name or nickname of its longtime ruler Nursultan Nazarbayev, who resigned the presidency in 2019 despite “winning” his previous “election” with 97% of the vote. You can fill in the blanks from there. The country is struggling to recover from decades of one-party rule, and for the current ruler Tokayev to call in Russian assistance is more than a little ominous.

So why does this team even exist? For one thing, there is no Russian team at the World Tour level, so the opening for an eastern European team is there. For another, post-Vino, Kazakhstan has put out its fair share of athletes, including current Astana leader Alexey Lutsenko, who has been scoring points for years and was recently seventh at the Tour. He too has endured a brush with infamy, being tied to a visit to Michele Ferrari with his former teammate Jakob Fuglsang, but the official word on that is that no further investigation was warranted. I guess we have to each decide how comfortable we feel about this, but if you presume innocence then Kazakh cycling looks like it’s truly a part of the conversation.

No doubt another reason why this team exists is the country’s desire to be noticed by the West. Cycling is a lot easier place to get attention than most sports — it just takes one great athlete, really, or a handful anyway. Few small sports have a bigger reach than cycling, which combines its small profile 49 weeks a year with its ability to take over the sports pages in July in like 200 countries. For a few million in sponsorship money, you can buy a lot of eyeballs. No doubt Kazakhstan, with its former Soviet Union pedigree and all that means — huge investments, legit or otherwise, in endurance sports training from a young age — plus its abundance of hills to climb, is as good a candidate to nourish cycling dreams as anyplace else from Central/Western Asia.

So that’s a long-winded way of saying, I see you there Astana, and I expect to continue seeing you. It would be maybe a more positive sign if you made a permanent break from guys like Vino, because western sports fans are always a little suspicious of athletes from the old Soviet Union, and cycling doesn’t need any more of that than it inevitably has to endure. But it’s also fair to take your riders and directeurs at face value, given the lack of doping scandals since 2014, and hope that your brand is going to serve as a beacon of stability for the Eastern Bloc.

What We Thought and Got Last Year

Without the benefit of our collective thinking having been actually recorded, I would guess that we would have come into the season skeptical of their direction. In 2018, Astana had risen to the third best scoring team in cycling, but from that point forward things — especially the roster — began to disintegrate. First it was Michael Valgren, although Astana can take comfort in knowing that he hasn’t been able to duplicate his huge 2018 season for DiData/EF. The following transfer season they bid adieu to Magnus Cort Nielsen, who has been missed as Astana struggle to find a place in the sprints. Then last winter it was Miguel Angel Lopez’ turn to seek a change, heading to Movistar. Of the replacements, only Aleksandr Vlasov, coming over from Gazprom, and Alex Aranburu, from Caja Rural, delivered for the baby blues. With mainstay Fuglsang’s aging and legal issues further impacting their point total, Astana dropped to fifth in 2019, then 7th, then 13th last year.

Obviously budget restrictions are a major part of the problem. In 2021, with Vino being told to whack 30% of the payroll during the COVID stoppage, the team was forced to part ways with Lopez to save money, and almost had Vlasov wrested away with a year left on his deal. They gave up their women’s program entirely, selling their license to A.R. Money. So as the results drop off, I guess it’s a sign of the sport’s maturity to say that you get what you pay for.

Our team ranking only goes ten deep, and Astana didn’t make that. Lutsenko was their only rider in the top 80, at 51. Note: there are 18 World Tour teams, so if you are one of them, you’d probably consider it par to have a rider ranked in the top 18. So yeah, this was kind of a shitshow.

Comings and Goings for 2022

Incoming are a lot of Italians: Moscon, both Nibali brothers, Simone Velasco, Michele Gazzoli, Leonardo Basso, and Valerie Conti. From the less cultured realms they are also bringing in Joe Dombrowsi, Andrey Zeits, Aliaksander Riabushenko, Lopez, Sebastian Henao, David de la Cruz, and they are calling up Nurbergen Nurlykhassim from the development squad.

So What Happens Next?

The team meals improve? I dunno, it’s not like they didn’t have enough Italians on staff already. For all the hype around the big names coming in, it may be the Italian they already had who makes things start looking up. Samuele Battistella finished the year off strong with a win in the Veneto Classic and a couple other nice autumn results. Asking too much? OK, well, I wouldn’t be too hopeful about Vincenzo Nibali enjoying a career renaissance at 37, but then I’d never put anything past that guy.

More likely Astana continue to try to attack the big stage races with a lineup of climbers featuring Lutsenko and Lopez, with Nibali and a host of veterans around to help. Keep an eye on young climbers Vadim Pronskiy and Harold Tejada, neither of whom is ticketed for stardom (yet) but who could be threats on a good day for a result or for some top teamwork.

Then there is Gianni Moscon. Setting aside his, um, lack of popularity, the guy has been an all-around point-scorer who Astana hopes can reanimate their classics team. By himself? He’s not riding for INEOS anymore, and it will be interesting to see if that makes all the difference. But last time we saw him he was threatening to win Paris-Roubaix, so I would bet on this investment paying some dividends.

I guess in the end Astana’s 2022 is about survival. If they can escape another budget blowup and reestablish their relevance in some area, probably the non-French grand tours, then it will probably count as a success. Barring that, they will continue to be “Vino’s team,” not a good thing from the outside, and miss Vlasov as he goes on to chase his lofty goals.