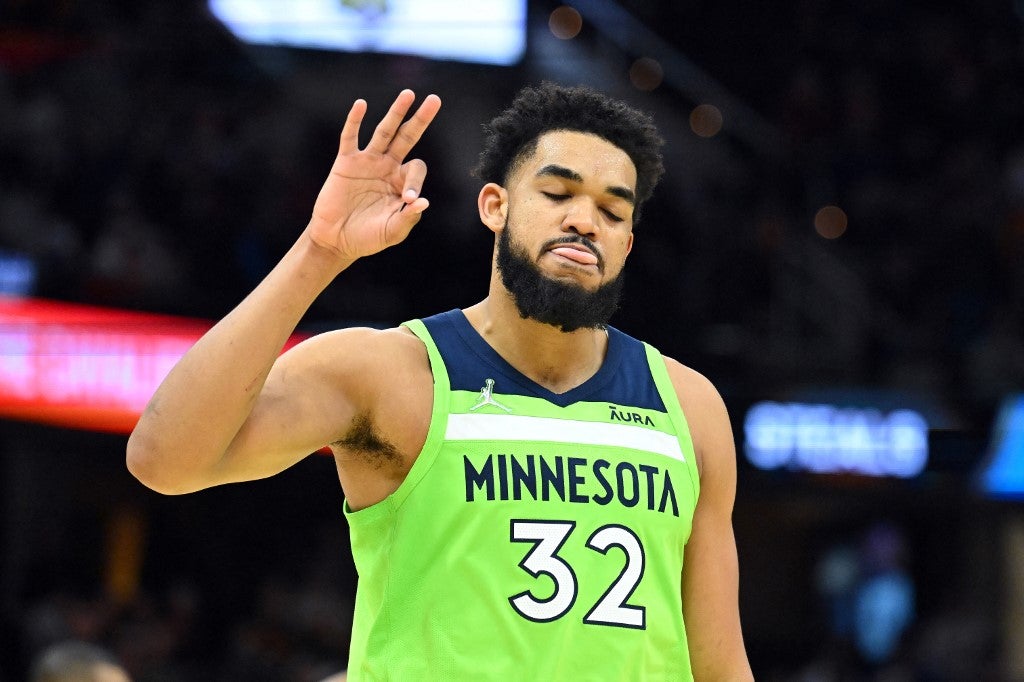 Karl-Anthony Towns #32 of the Minnesota Timberwolves celebrates after scoring during the fourth quarter against the Cleveland Cavaliers at Rocket Mortgage Fieldhouse on February 28, 2022 in Cleveland, Ohio. The Timberwolves defeated the Cavaliers 127-122. Jason Miller/Getty Images/AFP

D’Angelo Russell fired in a team-high 25 points on Monday as the Minnesota Timberwolves snapped the Cleveland Cavaliers’ eight-game home winning streak with a 127-122 victory.

Minnesota’s Karl-Anthony Towns had 17 points, including the game-winning 3-pointer with 12.4 seconds left that snapped a 122-122 tie. Towns won the league’s 3-point contest during All-Star Weekend in Cleveland.

🚨 KAT GIVES THE T-WOLVES THE LEAD 🚨

Anthony Edwards and Jaden McDaniels each added 17 points and Patrick Beverley had 11 for the Timberwolves, who shot a sizzing 54.7 percent from the field.

Kevin Love led all scorers with 26 points for the Cavaliers, who hadn’t dropped a home game since Jan. 4 against the Memphis Grizzlies.

Cedi Osman and Jarrett Allen each had 21 for Cleveland. Brandon Goodwin had his first career double-double with 17 points and 12 assists, and Evan Mobley added 15 points and 10 rebounds.

Minnesota won for the second time in three games while Cleveland fell for the fourth time in five games.

The Cavaliers trailed by 23 points in the third quarter but came all the way back to tie it at 122 on Osman’s 3-pointer with 33.8 seconds left.

Osman missed an off-balanced 3-point attempt that would have tied the score with five seconds remaining. Russell sealed the outcome by sinking two foul shots with 3.2 seconds left.

The Cavaliers scored 10 unanswered points late in the third and cut the deficit to 101-88 heading into the frantic final period.

The Timberwolves shot 55.8 percent from the field in the first half, as they led 64-61 at halftime. Minnesota outscored Cleveland 38-24 in the second quarter.

McDaniels paced the Timberwolves with 14 first-half points. He was 4 of 6 from 3-point range in the first two quarters.

Goodwin had 15 points and seven assists in the first half for the Cavaliers, who shot 55 percent from the field before the break.

Allen had 10 points in the opening quarter for Cleveland, which led 37-26 after 12 minutes.