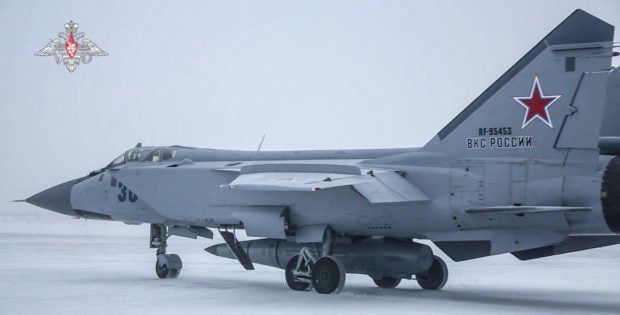 PARIS — Russia’s air force still does not enjoy total superiority in the skies above Ukraine despite its overwhelming numerical advantage, part of the reason for the army’s slow progress on the ground, experts say.

According to strategic intelligence research service Janes, Russia’s air force comprises 132 bombers versus none for Ukraine, 832 fighter jets against 86 for Ukraine, and 358 transport planes against 63 for Kyiv.

Other aerial weapons show a similarly crushing asymmetry, except for drones of which Ukraine has 66 and Russia 25.

Even though Russia has not engaged its entire air force in the conflict, its forces would still have been expected to rule the Ukrainian air space by now, experts say.

“While Russia has the advantage that comes with greater numbers, it has not yet gained control of the skies over Ukraine to the extent that it has been able to prevent the Ukrainian Air Force from operating and inflicting damage on the Russian war effort,” said Gareth Jennings at Janes.

“They are still engaged in trying to neutralize Ukrainian ground- and air-based air defenses,” he told AFP.

The Russian air force is, nevertheless, in a position to protect the advancing army where it counts, such as a convoy — dozens of kilometers (miles) long of trucks, armoured vehicles and artillery — advancing on Kyiv from the north, as seen on satellite images Tuesday.

“The Russians certainly have air superiority along a 200-kilometer (125-mile) stretch close to the border, and around priority objectives,” said Pierre Razoux, head of research at the FMES strategic research foundation.

Whatever air power the Ukrainians may still possess, “they will not risk it against this kind of position because they would be all but certain to be destroyed”, he said.

But even after accounting for the convoy’s need for air cover, experts remain puzzled as to why the two-day Russian bombing campaign against Ukrainian airfields and control towers at the start of the campaign was not quickly followed up with a grab for all of the country’s air space.

“The lacking efficacy of the Russian air force is one of the surprising elements of this conflict,” said former French army colonel Michel Goya.

Despite the experience from its intervention in Syria in 2015, the Russian air force is still a far cry from “the precision, the flexibility and the inter-operability of Western air forces”, he said on Twitter.

Air defenses deployed in Kyiv and in other cities are in good shape meanwhile, leaving the Russians with the hard choice of launching high-altitude attacks and risk carnage among the civilian population, or coming in low at the risk of being shot down.

“You get the feeling that Putin is pursuing contradictory objectives,” said Razoux. “On the one hand he’s showing off his power, but on the other hand he hasn’t yet crossed some lines, such as taking a city whatever the cost may be.”

Justin Bronk, aviation expert at the British RUSI think tank, said he suspected a possible lack of precision guided munitions (PGMs) available to Russian pilots may also be a factor in the attack delay.

“This not only indicates a very limited familiarity with PGMs among most Russian fighter crews, but also reinforces the widely accepted theory that the Russian air-delivered PGM stockpile is very limited,” he wrote on Monday.

Other factors for the air force’s hesitancy could be the fear of friendly-fire incidents, and the Russian pilots’ limited total flying hours on their jets, he suggested.

But just because the expected onslaught of the 300 Russian fighter planes deployed near combat zones has not yet happened does not mean that it won’t happen, perhaps soon.

Whatever may have gone wrong so far, Russian fighter fleets “remain a potentially highly destructive force, and one that could be unleashed against aerial and fixed ground targets at short notice over the coming days”, Bronk said.

Russia’s war on Ukraine: Day 6 situation on the ground

‘Unprovoked and unjustified:’ world reacts to attack on Ukraine