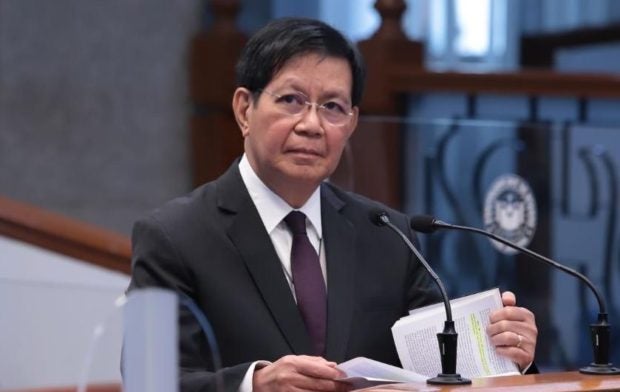 “They should start scenario building: If this, then this. If that, it should be that,” Lacson, a former military officer who was also national police chief, said in Filipino.

“It would be difficult if we only start thinking how to solve a problem when it’s already there,” Lacson told reporters after a dialogue with the tricycle sector here.

“It’s better if we’re already thinking about it. That’s how a leader should be — and not one who starts thinking only when the problem is already there,” he said.

Lacson made the statement after being asked to react to the move of President Rodrigo Duterte to call for a “special meeting” with the military, police, and some Cabinet members to discuss the ongoing Russia-Ukraine crisis.

Lacson said he agreed with the move, saying it was a “good” idea.

“It’s good that President Duterte has started talking with the military, even the economic managers,” he said. “Let’s stop saying that Ukraine is so far away from us. Just because Ukraine is halfway around the world doesn’t mean it has no effect on us.”

“I fully agree with the President in calling for an emergency meeting with the military, defense establishment, and even our policymakers, so that proactively they could already discuss: What will we do?” he added.

The senator, who also chairs the Senate defense committee, also mentioned it was a “good indication” that China abstained from voting on a United Nations Security Council resolution condemning Russia’s invasion of Ukraine.

“It would have been a bad indication if China voted in favor of Russia,” he added.

“Our territory being invaded — that could provoke another crisis,” Lacson said. “Why? Because we have an agreement with the United States that if we are attacked — say our boats were attacked — they need to help. They are obligated to help. We have a  Mutual Defense Treaty.”

‘Wrong to be neutral’

Lacson reiterated that the Philippines should not be neutral in the Russia-Ukraine crisis, saying this may have indications on Manila’s own sea dispute with Ukraine.

On Monday, the Philippines joined other countries at the United Nations in condemning the invasion of Ukraine.

“I am right because I keep studying,” Lacson said.

He then recalled that some of the other presidential candidates at Sunday’s CNN Philippines’ “Presidential Debate” agreed on being neutral in the ongoing conflict.

“It’s wrong to be neutral. What will happen to us if it’s being invaded by China? And what if we ask for help from other countries in condemning whichever country invaded the West Philippine Sea?” he added.

“We might be embarrassed to ask for help because we did not have the courage to join what’s called the community of nations to condemn what’s clearly an aggression — unprovoked aggression — against a weaker country like Ukraine,” he said.

“I really don’t want anyone being oppressed. That’s intense oppression. That’s really bullying. So what’s really called for is we should stand up for what is right,” he added.