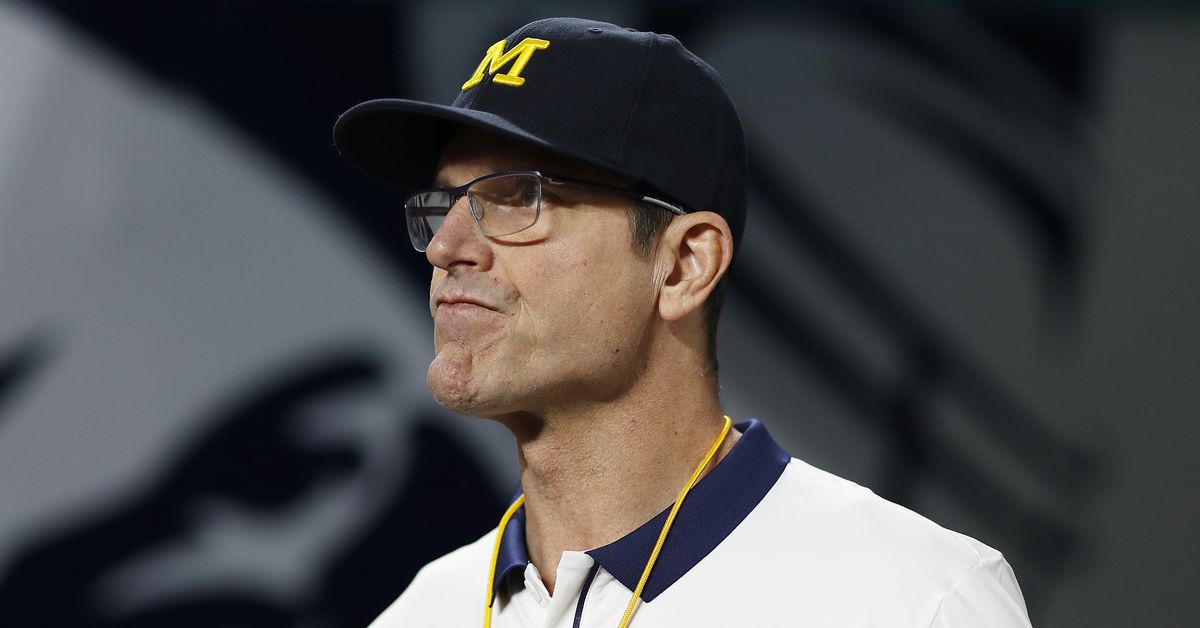 Jim Harbaugh’s seven seasons as the head coach of Michigan football have been full of ups-and-downs. While Harbaugh has compiled a gaudy overall record, his Wolverines were often thought to be underachievers — until this past season. Michigan’s excellent 2021 campaign has now put the 58-year-old coach back on NFL radars, where he could be one of the league’s hottest candidates as teams look to fill new openings.

Michigan went 12-2 this past season, including the program’s first win over archrival Ohio State since 2011. The Wolverines were one of four teams in the College Football Playoff, but they were blown out by a powerhouse Georgia team in the semifinals. It was a big year for Harbaugh, who signed a contract extension before the season that cut his pay in half. The timing might be right for him to jump back to the NFL.

Harbaugh spent four seasons as head coach of the San Francisco 49ers from 2011-2014. He led the Niners to the Super Bowl, where he lost to the Baltimore Ravens and his brother Jim. He holds a 44-19-1 record as an NFL head coach.

Is Harbaugh ready to jump back to the pro ranks? We’ll monitor every rumor he’s involved in here.

The Miami Dolphins made the most surprising coaching firing of the offseason by axing Brian Flores despite the team ending the season on an 8-1 streak. Dolphins owner Stephen Ross is a Michigan alum and a major donor, which sparked speculation that Flores was fired so Ross could hire Harbaugh.

That’s not going to happen, according to Ross himself.

#Dolphins owner Stephen Ross: “I’m not going to be the person to take Jim Harbaugh from the University of Michigan.”

The Raiders could have interest in Jim Harbaugh as head coach

The Las Vegas Raiders fired head coach Jon Gruden during the season after an email scandal, but the team made the playoffs anyway behind interim coach Rich Bisaccia. It remains to be seen if the Raiders job will actually be open this offseason, but if it is, Harbaugh could be a candidate.

Rapoport also mentioned that the Raiders would plan to do a full coaching search if the position becomes open instead of “anointing” someone like they did with Gruden.

The Bears could have interest in Jim Harbaugh

The Chicago Bears fired GM Ryan Pace and head coach Matt Nagy after another disappointing season. Could the Bears’ full rebuild begin with Harbaugh as head coach? According to college football insider Bruce Feldman of The Athletic, Harbaugh to the Bears could be an ideal situation.

On The Rich Eisen Show, The Athletic’s Bruce Feldman said, “If he really wants to go back to the NFL, this might be an ideal situation.

“In addition, there’s another franchise that he knows very well, that he has some, from what I’m told, some really positive feelings towards people there. And that’s in Chicago with the Bears.”

The Bears selected Harbaugh with the No. 26 overall pick in the 1987 NFL Draft. He started 65 games for the Bears and is among the franchise’s leaders in several passing categories.

Jim Harbaugh reportedly told a recruit he has NFL interest

According to the father of four-star wide receiver recruit Darrius Clemons, Harbaugh told the family he’ll consider NFL job offers for next season for next season (via 247 Sports).

“He said that he’ll entertain [it],” Larry Clemons, the father of Darrius Clemons, told 247sports.com. “He was up front with us about that. I had Coach Harbaugh speak to my pastor. They had a good conversation. Our pastor asked him about that, and that’s just that’s the [reply] that he gave him.”

We’ll keep this story updated as it develops.