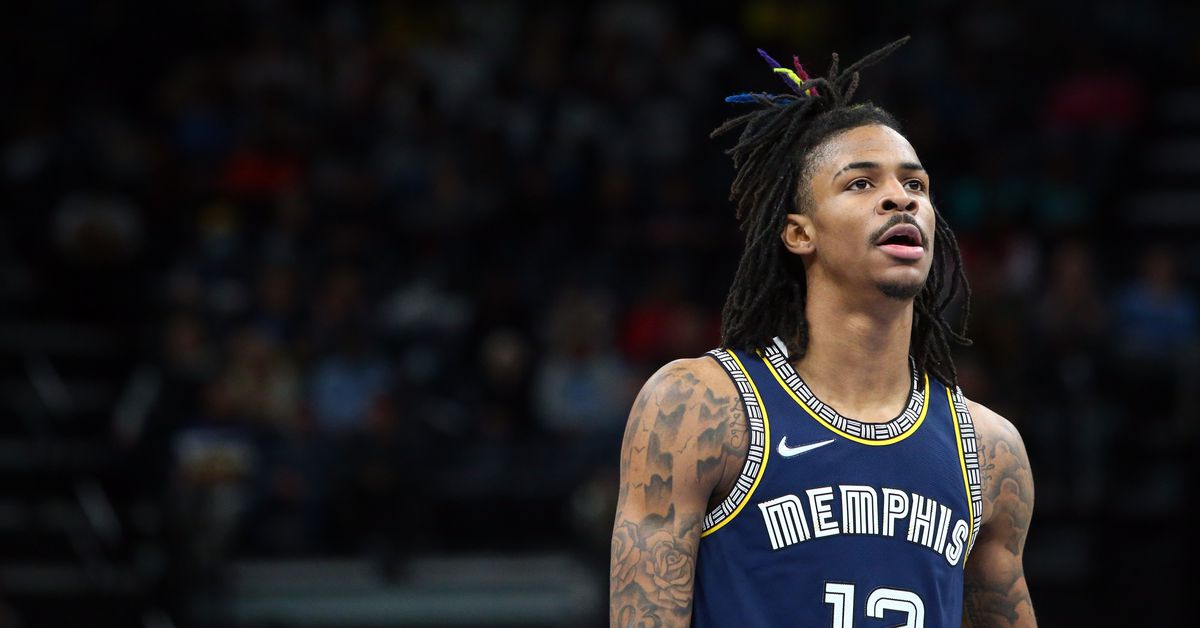 There was a viral highlight created off the opening tip when the Memphis Grizzlies met the San Antonio Spurs on Monday night. As Ja Morant went around a screen from Steven Adams on the first play of the game, he casually tossed the ball back to his center without attacking. Spurs point guard Dejounte Murray read the pass the entire way, intercepting the ball and racing down court for a layup. Morant pushed the ball down the other end after the basket, but Murray was right behind him the whole time, and erased Morant’s layup attempt with a chase-down block. The sequence was all over social media minutes later.

Maybe the Spurs should have thought twice about showing up Morant in the opening seconds, because the rest of the game felt like his personal vengeance tour. All Morant did was play arguably the greatest game of his iconic third season, torching the Spurs for 52 points, a win, and several jaw-dropping highlights that only add to his burgeoning legend.

Words can only capture so much when it comes to Morant. You need to watch his performance yourself.

Morant scored his first bucket by busting through the first line of the Spurs’ defense like a running back slipping between his guard and his tackle. His next bucket came after a deflection, when Morant launched and nailed a logo three late in the shot clock.

From there, it was on: he put Keldon Johnson in a spin cycle for a layup, then scored in transition over four Spurs defenders:

That was just the first quarter, and it was probably the most unremarkable part of Morant’s night.

After sitting much the second quarter, Morant entered the game and immediately turned into a supernova. In his 5:37 on the floor in the period, Morant had 15 points on 6-of-7 shooting. After starting his scoring burst with a pair of pull-up threes, the Grizzlies forced a Spurs miss on the other end. Adams got the rebound and had his eyes downcourt.

Morant took his outlet pass and made magic happen:

Jakob Poeltl is one of the best rim protectors in the NBA by the numbers, but Morant soared above him for one of the great highlights of his career. Somehow he would top it only two minutes later.

After the Spurs made a free throw just before halftime, Memphis only had 0.4 seconds left on the clock. Adams launched a hail mary from under his own basket, which landed perfectly in Morant’s hands on the opposite baseline. In one motion, Ja caught the ball, turned his body and hit a shot, all before his feet ever touched the ground.

Morant had set the franchise scoring record only two days earlier by dropping 46 points in a road win over the Chicago Bulls. He was electric in that game, catching lobs and contorting his body for finishes only he can make. As he entered the fourth quarter with around six minutes left, he was sitting on 39 points.

Morant immediately grabbed an offensive rebound and laid the ball in. That’s when Morant’s teammates made it their mission to get their star another franchise record.

It was pretty cool how hard the rest of the Grizz sold out to get Ja to 50—Adams jumping out of bounds to save the ball, JJJ hustling to get possession back, Bane immediately looking for Ja on the scramble drill. You could tell how much they wanted it for him. Fun friggin’ team.

No player in Grizzlies history had ever scored 50 points, but Morant did it on a beautiful layup minutes later. He ended the night with 52 points that expanded the imagination of what an NBA point guard can be.

Perhaps more importantly, the Grizzlies’ win put them one game behind the Warriors for the No. 2 seed in the West. With Draymond Green still out and Golden State on a long road trip, Memphis could keep climbing up the standings.

Morant is not the best player in the NBA, but he might be the most exciting. He’s the sort of player who makes children fall in love with the sport and reminds the old and washed among us why we care so much about this game in the first place. He shares a quality with the all-time greats for his ability to transcend the game he’s playing in.

Grizzlies-Spurs on the last day of Feb. should be pretty forgettable. Instead, it turned into the Ja Morant Show in a way the folks in Memphis will never forget.

When it was over, Morant insisted his entire team was in the photo commemorating his franchise record. Then he grabbed his young daughter for a post-game interview:

The Grizzlies’ rise up the Western Conference standings this season has been one of the great stories in the league. Don’t forget they played some of their best ball when Morant was injured earlier this year. This is a more than a one-man team, but when Morant is in takeover mode it’s hard to notice anyone else on the floor.

The Grizzlies’ continue to ascend, and so does their star point guard. At this point, there’s no reason to cap the ceiling on either.