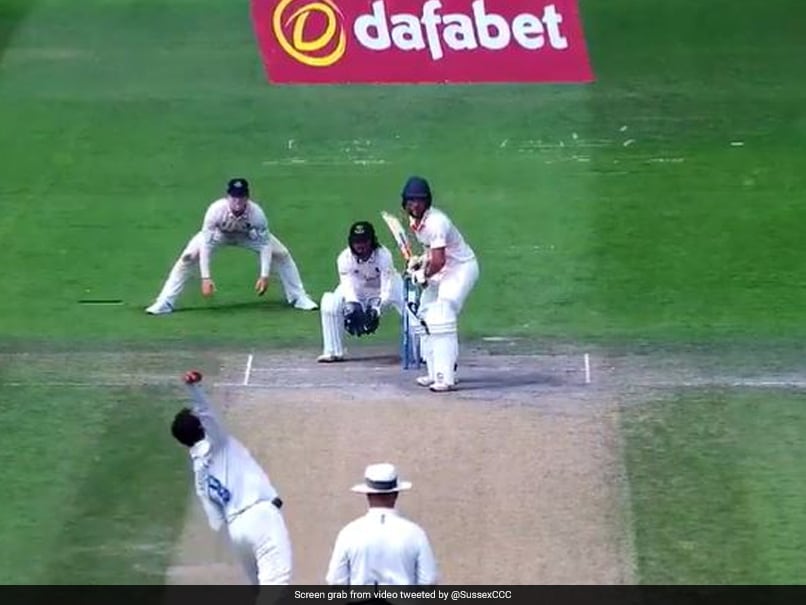 Cheteshwar Pujara had a great time with Sussex in April-May. He scored two double centuries and two tons for Sussex and made a comeback to the Indian cricket team for the fifth rescheduled Test match against England. Now the veteran batter has again joined Sussex and is currently playing in the County Championship Division Two against Leicestershire. However, on Wednesday, Pujara was seen donning a new hat. He bowled one over during Day 3’s play and conceded eight runs. He was hit for a boundary too by Leicestershire’s Wiaan Mulder.

Earlier, Pujara bowled one over in Test cricket too. In First-Class cricket, Pujara has got six wickets in 21 innings.

An over of @cheteshwar1 bowling. pic.twitter.com/I4PdyeCxCx

Before Pujara’s first stint with Sussex, he played three Ranji matches for Saurashtra, and scored 91 in the first of those games against 41-time champions Mumbai. It was from that point, Pujara says he knew “everything was back to normal.”

“When you want to perform for your team, you need to apply yourself. When you play competitive cricket, you learn so many things. But sometimes you need that experience, you need that time in the middle and that was most important.”

“I was preparing for this even back home. Even before, I joined the Sussex team. I played three Ranji Trophy games for Saurashtra. Even in that, I found my rhythm. I knew that I was batting well. It was about getting a big score under my belt. When I had that in my first game, I knew that everything was back to normal now. I am finding my footwork. My backlift, everything was coming along well. After that, I just wanted to enjoy my game. Try and make sure you contribute to the team’s success. Most important thing is to have a good time on the field.”