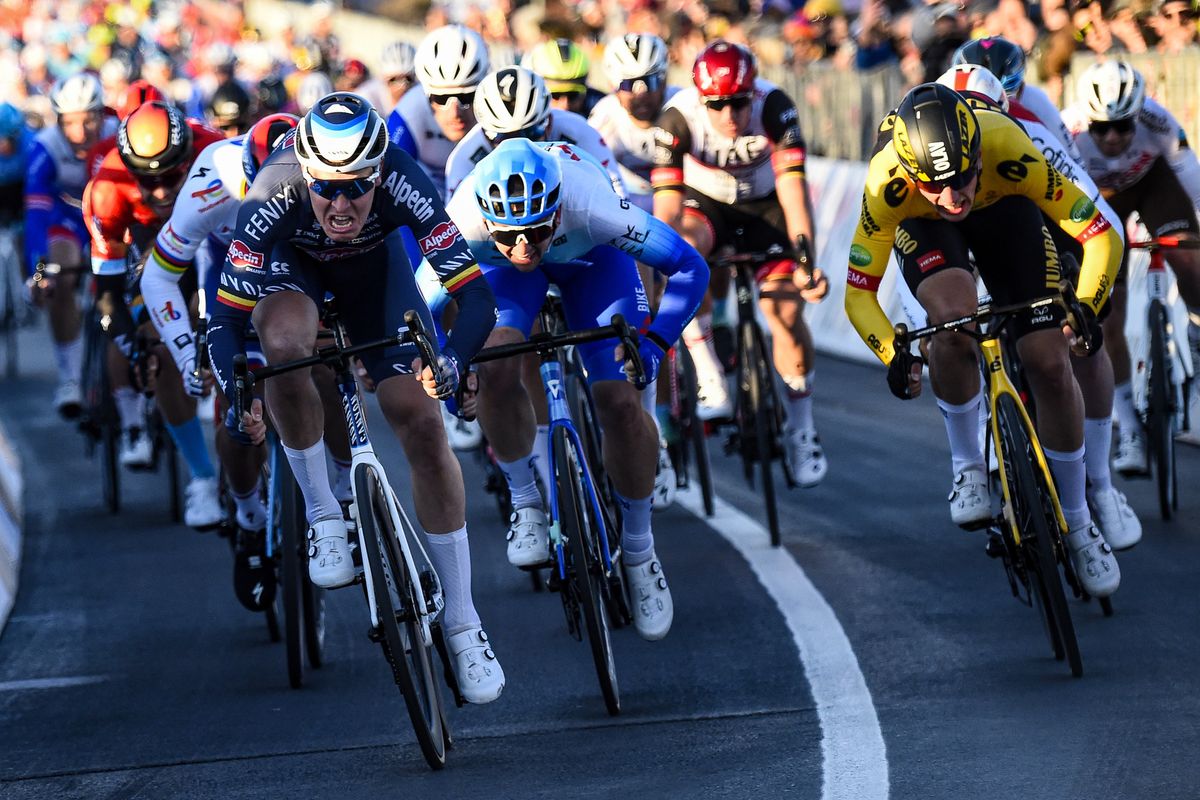 It is only March, but Kaden Groves‘ close-run third place on stage 2 of Tirreno-Adriatico means the BikeExchange-Jayco rider has already spent as much time on the podium this season as he did last year. Plus, this time, the growing speed and consistency netted the Australian his first top-three finish at a WorldTour level race.

The development of Groves into a sprinter that can make a mark at the front of top-tier races is part of a broader growth in sprint strength at the Australian-based squad. BikeExchange-Jayco secured the return of Michael Matthews last season and this year added Dylan Groenewegen, who quickly delivered the team’s first victories of the season at the Saudi Tour.

It was 23-year-old Groves, though, who put the team on a WorldTour podium for the first time this year, after lining up at Tirreno-Adriatico alongside Matthews. The established sprinter favours a fast finish with tough terrain before the line to cause a selection, while it is Groves that is more suited to the larger bunch battles.

“I’ve got to thank the guys and the team for giving me the opportunity to sprint today,” Groves said in a team statement. “I’ve been very consistent this year, it’s another podium place today and my first WorldTour podium, so I’m pretty happy with that.”

Groves has been with the team since late 2019 but has faced a number of injury setbacks along the way. Late in the 2021 season he broke through with his first European win at the 2.1-ranked Tour of Slovakia prologue and then also took a second in stage 3 at that race and two podium placings at the Cro Race. In November, the team announced that he had been signed for another year, with the team’s general manager Brent Copeland saying at the time that the squad was counting on Groves and his continuous development and they would “help him on his route to become one of the best sprinters in the peloton”.

The start to this season looks to be a validation of the team’s faith in the developing rider. At the Tour of Oman, Groves started with a third place on stage 1, also adding two second places on stage 2 and stage 6. The UAE Tour wasn’t one where Groves featured in the results, but he wasted no time in shifting back onto the podium at the Italian stage race.

Stage 2 was the first chance for the sprinters at Tirreno-Adriatico, which started with a time trial, but it probably wasn’t quite the finish some expected with the likes of Caleb Ewan (Lotto-Soudal) and Elia Viviani (Ineos Grenadiers) losing their lead out trains on the hectic run-in on narrow roads. Peter Sagan (TotalEnergies) went early as the race charged toward the Sovicille finish line, then Tim Merlier (Alpecin-Fenix) leapt out from behind his wheel and Groves, who had already started to wind up the pace, followed.

Merlier held his position out the front but Olav Kooij (Jumbo-Visma) closed rapidly on the left of Groves, just edging the Australian out of second place in a photo finish. Nevertheless, Groves finished comfortably ahead of fourth-placed Sagan, to claim his first WorldTour podium.

“I think all the guys can be proud of their performances today,” said Groves, who was dropped into position among the sprinters by final lead-out rider, Alex Edmondson. “Now we can look forward to the rest of the week ahead with some more opportunities to come.”

Stage 3, as the race crosses into Umbria for a finish in Terni, should deliver another day for the sprinters. Then they will likely have to wait for the final day of racing and the largely flat run around San Benedetto del Tronto for another bunch sprint to unfold.