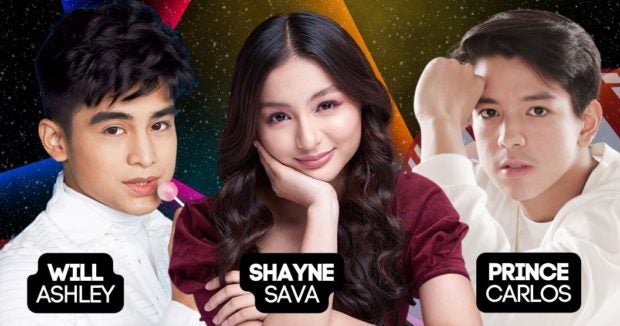 What a joy and delight it was for me to interview three bright-eyed, refreshingly innocent and extremely good-looking GMA Network Kapuso young stars, namely, Shayne Sava, Will Ashley and Prince Carlos for the latest episode from “Regal Studio Presents” entitled “My Favorite Son.”

That they could express themselves without filters or calculated and measured words tell me that they are not dwelling so much on what their showbiz careers will hold for them in the near future but rather that they are simply living in the moment, enjoying the little things and making everything count as they are still very young adults. And that is a very good thing for them because it will hopefully mean they will not be corrupted and led astray along the way in their journey, because it is obvious and discernible during my exclusive interview with them that they do not need to enter showbiz for survival reasons. Treat them right and well.

Interestingly, the theme of the latest episode from “Regal Studio Presents: My Favorite Son” is pure drama, and its three main stars are the youngest group to be cast. It would mean that there are very high expectations of them despite the show demanding heavy emotional scenes from each of them. And from the official trailer for it, I believe they will do well. Watch them later at 4:35 p.m. at GMA Network.

Below is my exclusive interview with Shayne Sava, Will Ashley and Prince Carlos.

Shayne Sava: Since I was a child, it has been my dream to be an actress. My parents have always supported my dreams. Whatever I want to pursue, they are behind me. Before I became an actress, I was about to take up Psychology and they supported that, too. But the opportunity came by for me to be a young actress, so here I am.

Prince Carlos: I am following my own dream. My parents are always there for me, to support me in whatever I do in life. Even as a basketball player, it has always been my dream ever since. So now, I have shifted to something new which is acting. So when I entered the industry, my parents have been 100% supportive.

Which international celebrity do you wish you could be? Please explain your choice.

Shayne Sava: I think it would be Lisa Manoban. I love Lisa Manoban from Blackpink. She’s not just good at dancing; she’s a total package. I know she can act. She can also sing which is very cool. She can also rap. That’s why she is my idol.

Will Ashley: When it comes to acting, I like Leonardo DiCaprio. He’s such a solid actor. He gives such an incredible and impressive performance because he is able to give justice to all the roles he plays. So, it has to be Leonardo DiCaprio for me.

Who is your favorite superhero now? What makes that superhero interesting for you?

Shayne Sava: I am a big fan of Marvel. I really love Ironman because Ironman is the best. He is so cool! He is also very intelligent. He also cares greatly for his friends. And he is super cool when it comes to armors. Wasn’t he the one who gave Spiderman his suit? He’s the best for me. It’s just so sad he died.

Will Ashley: Superman! Since I was a child, I have always liked Superman. Actually, if there’s a chance that a Filipino adaptation of Superman will be made, I will really do my best so that there will be a Superman here. I am really a big, big fan of Superman. He’s really my favorite superhero.

Name some songs that you like listening to again and again?

Shayne Sava: I think, “Let Her Go.” That’s the first ever song that I really liked and always sing. It’s by Passenger. And “All I Want” by Kodaline. Billie Eilish songs. And of course, Taylor Swift. Also “Leader of the Band’ by Dan Fogelberg. It’s an old song… but I love listening to it because it’s my grandfather’s favorite, so it’s very close to my heart.

Will Ashley: My favorite is “Baby, I’m Yours” by Arctic Monkeys. I love listening to it always because it’s very uplifting. For OPM, new ones like “Pagsama,” “Mundo,” “Nobela.” Those are the kinds of songs I like listening to for now.

Prince Carlos: I am fond of listening to beach vibes songs. Just chilling and playing the music while sitting on the beach and listening to the waves. Kolohe Kai songs like “Round and Around,” “Dream Girl,” “Cool Down.” Surf vibes. Those are my favorites, really.