Genelia Deshmukh started her career in her first film, Tujhe Meri Kasam, but we all can agree that we instantly fell in love with her in Jaane Tu Ya Jaane Na. Although she might have taken a break from her on-screen roles, nothing stops Genelia from being a multitalented producer and entrepreneur too! And that’s not only it; if you follow her on social media, you will also discover that she is a fellow foodie! The celebrity is well-known for being a vegan eater, and she and her husband Riteish Deshmukh even launched a vegan food company called “Imagine Meats” to promote her love for vegan cuisine.

However, like everyone else, Genelia might face some problems in finding vegan food wherever she goes. So, recently, when the actress was in Delhi, she especially thanked the hotel for bringing her plant-based food. In her spread, you can spot a platter of freshly cut fruits, a line of croissants with jam, pancakes coated with sugar, and what seems to be a vegetable chilla, along with some drinks. In her story, she also mentioned, “Thank you so much @eroshotelnewdelhi for taking so much care of us and making sure our meals are plant-based and yummy.” Check out her story here: 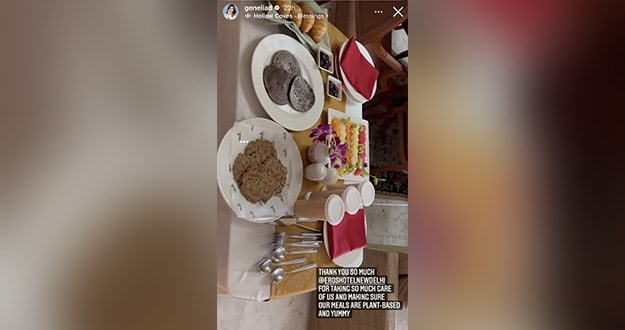 Looks amazing, doesn’t it? As we mentioned earlier, Genelia is a hard-core vegan, so when she has to bring something for her crew members, she ensures it is also plant-based. Genelia made the sweet decision to send her entire cast and crew a beautiful farewell treat by showering them with desserts as the filming of one of her new projects came to a close. She delivered her coworkers a selection of treats, including sumptuous chocolate cakes and cake jars filled with blueberries, mangoes, and other delectable fruits. But the desserts had a secret ingredient-they were all vegan, gluten-free, and sugar-free! You can read more about it here.

(Also Read: Genelia D’Souza Gives A Glimpse Of Her Diet, We Are Shocked And Amused)

As Genelia Deshmukh keeps sharing glimpses from her vegan journey, we can’t wait to see what will be next on her plate! What do you think about it? Let us know in the comments below!