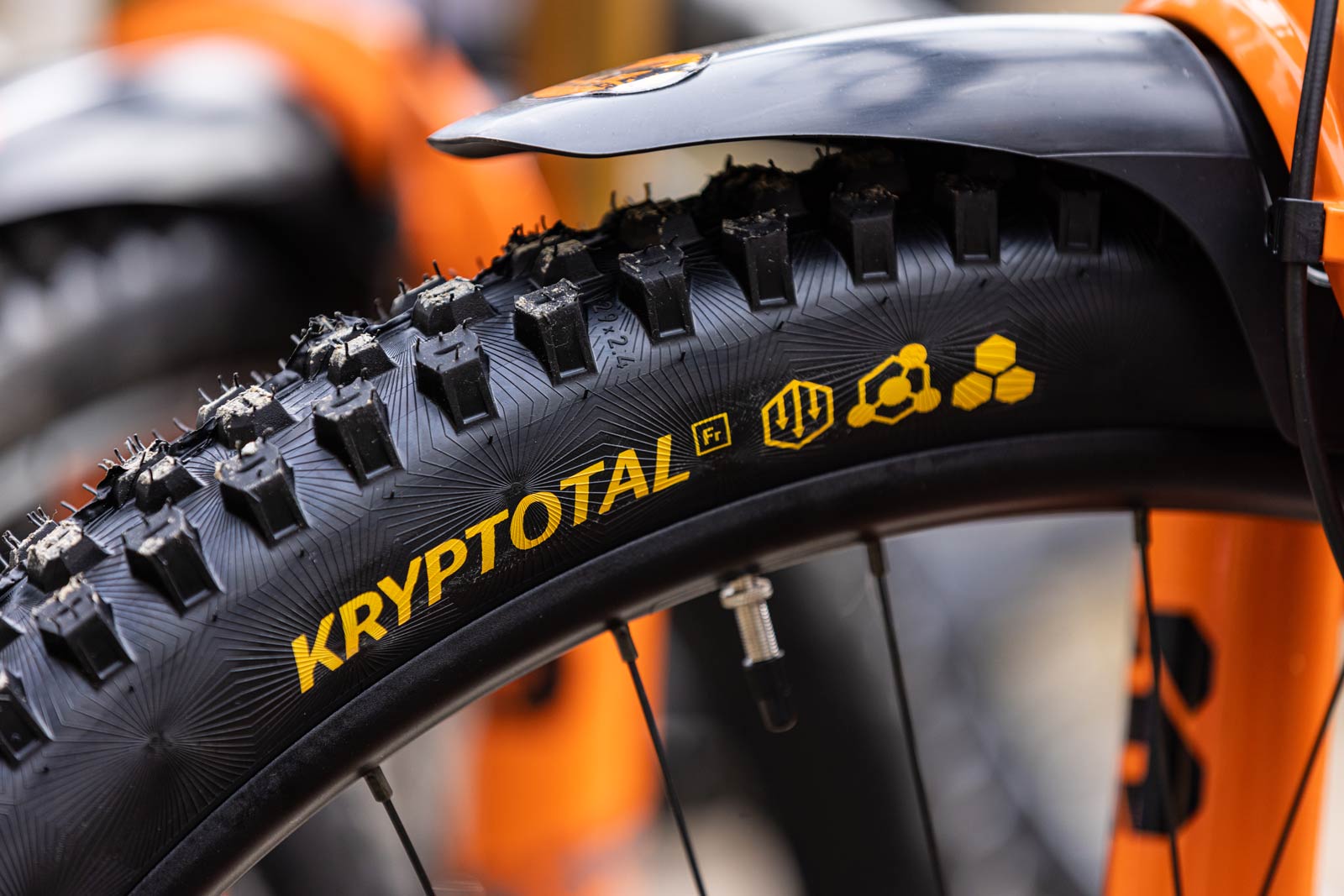 Continental Tires seemed to be resting on their laurels in the gravity department, having relied on various iterations of the King, der Kaiser and der Baron range of mountain bike tires for over 10 years. That was, until we spotted a radical-looking Continental-branded carcass seated to the rims of Jim Monro’s Atherton DH Bike at the Snowshoe DH World Cup. Now, the der Kaiser, der Baron and Mud King are usurped by Continental’s new Gravity Range comprising the Xynotal, Kryptotal, Argotal and Hydrotal tread patterns, combined with three casing options and three compound options. There are 40 new mountain bike tires in total – we cover them in great detail here.

The first year we rode for Continental, we did all our testing and development in Southern California, and we nailed the tire. Then we brought it back to the UK and were like, f%*k. – Dan Atherton

Needless to say, both Continental and the Athertons have learnt a lot more about tire development since they started working together many years ago. These latest mountain bike tires have been under development for around 3 years, with what sounds like hundreds of iterations having been tested under the wheels of Gee and Dan Atherton, as well as team riders of Continental Atherton, Continental Nukeproof and, more recently, Pivot Factory Racing. 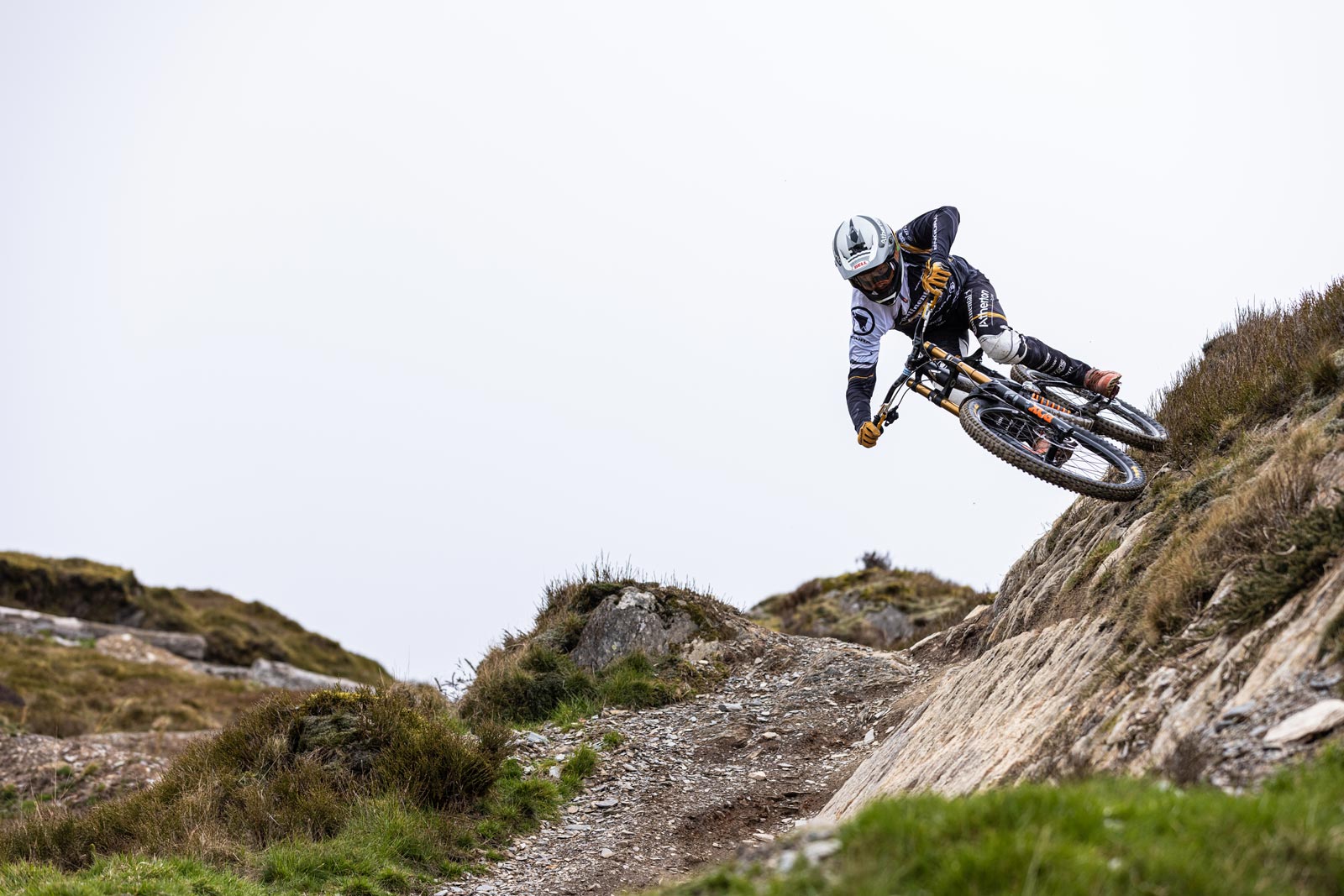 Continental didn’t initially set out to create a complete new range; their primary intention was to give their DH and EWS Teams a more competitive range of tires to get the job done, but the project snowballed, as projects do, resulting in no fewer than five new tread patterns catering to everything from dry, hard-pack bike park, to Scottish Enduro Series-worthy muddy ruts.

Setting themselves up for success, Continental invited the international media to Dyfi Bike Park in Wales, a location where a lot of the testing for the Kryptotal Front and Rear mixed-condition tires (reviewed herein) was conducted. Here’s a brief account of how we got on with the DH Casing SuperSoft variation on the wet (but drying) hard-pack, slate-rock berms and booters at Dan Atherton’ Dyfi Bike Park. 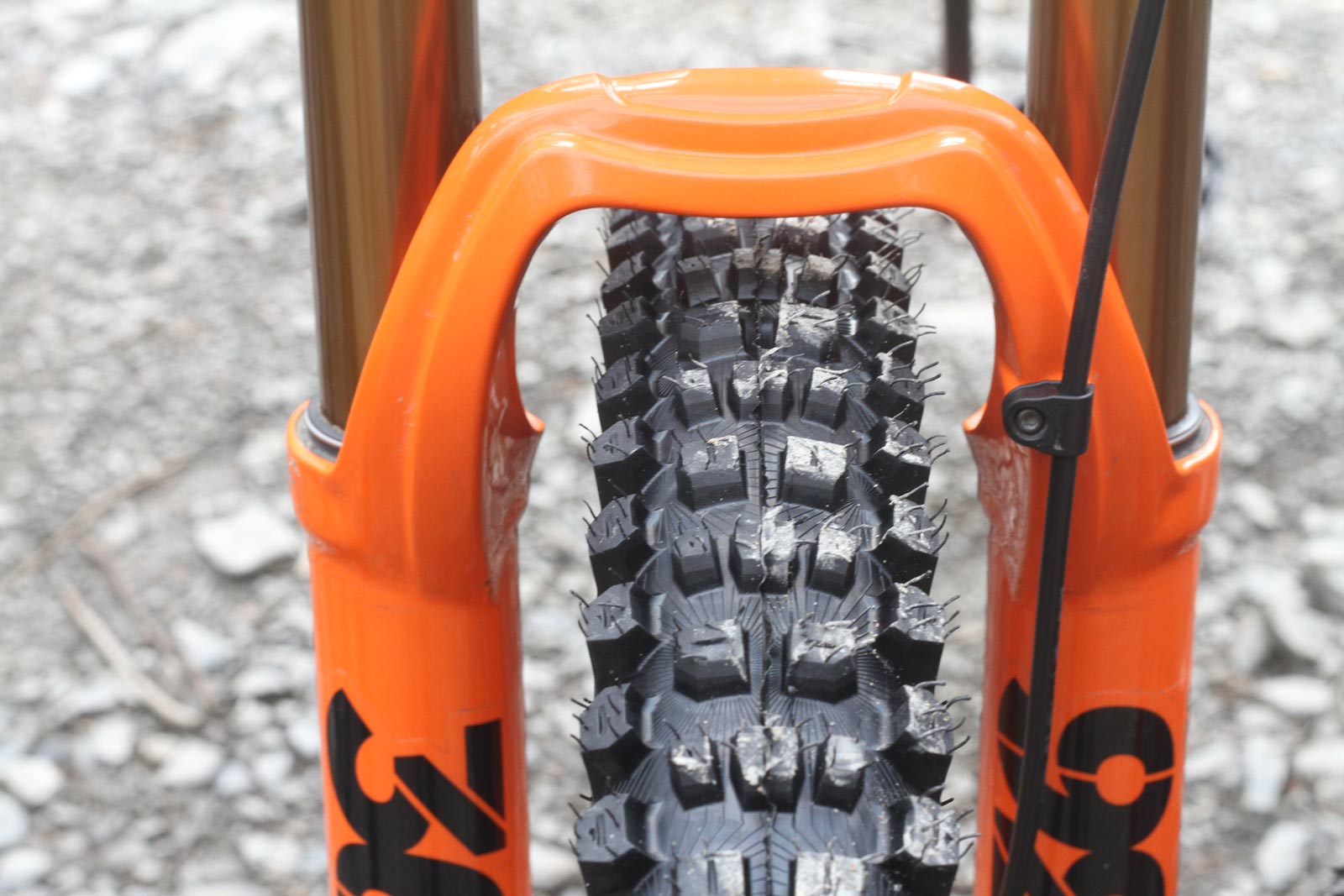 Continental do not discuss the Shore Hardness of their rubber compounds openly (find out why here). Twisting the side knobs of the SuperSoft compound, we can confirm it is indeed, very soft, and it rebounds very slowly, though perhaps not quite as slowly as Vee Tire Co’s TOP 40 compound.

Following Continental’s presentation of the new Gravity Range, I was handed the Atherton Trail Bike of none other than Dan Brown, the man now at the helm of Atherton Bikes (and often referred to as the 4th Atherton). It was fitted with the 29″ x 2.4″ Continental Kryptotal Front and Rear tires, DH Casing with the SuperSoft Compound. 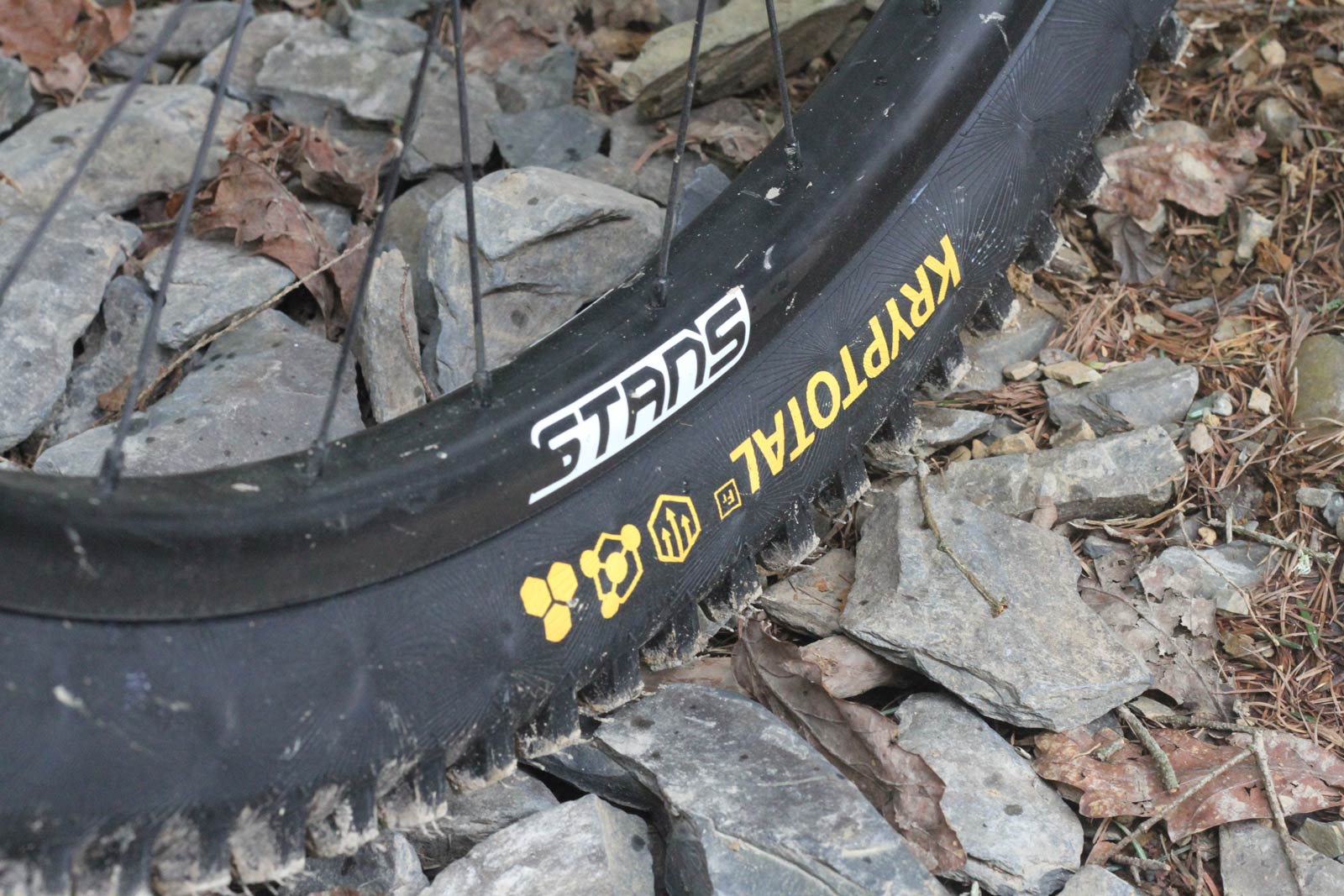 The Kryptotal tires are also available in 29″ x 2.6″, as well as 27.5″ x 2.4″ and 2.6″. There are also Trail and Enduro Casings to choose from, with faster-rolling Endurance and Soft Compounds, respectively. 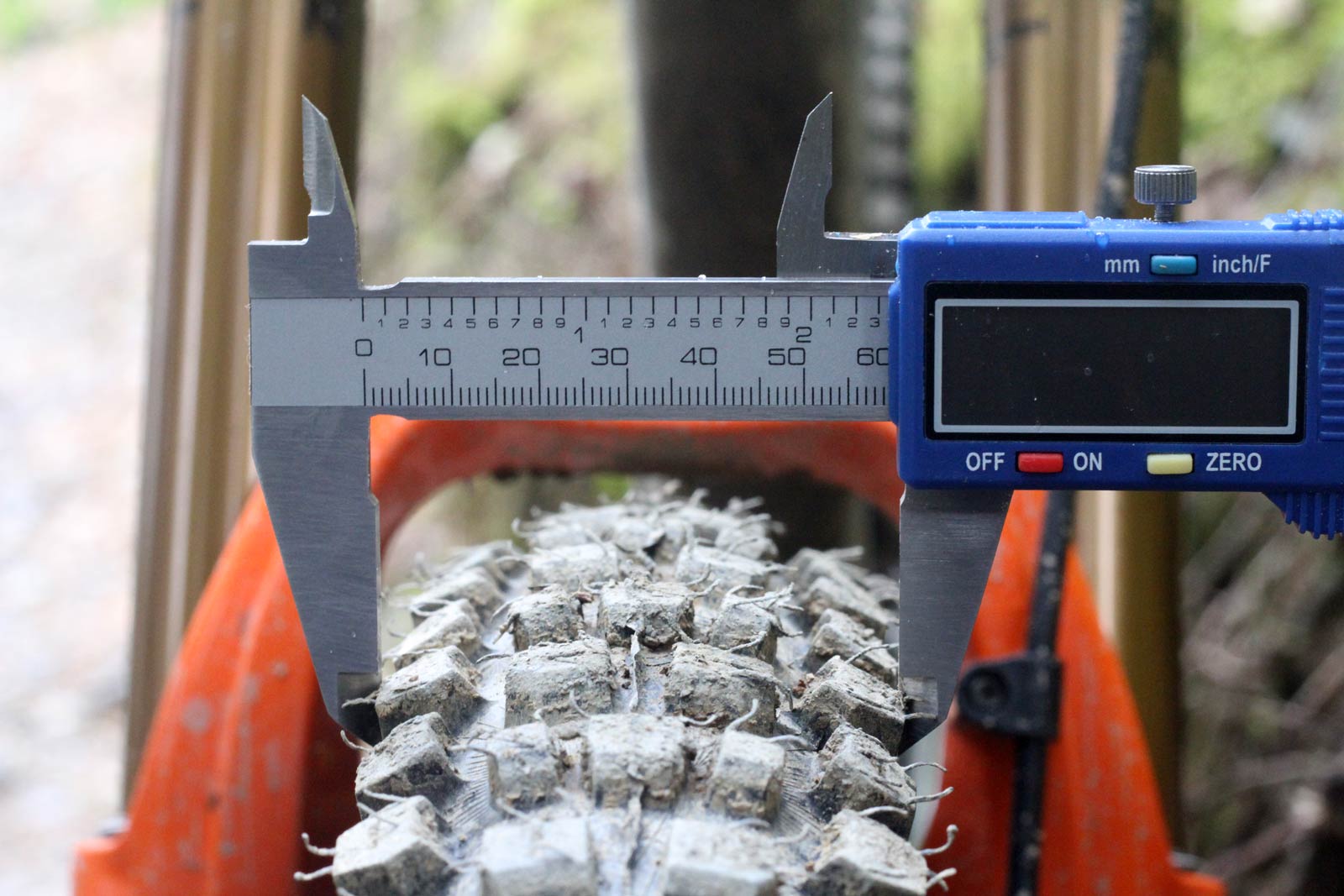 The Continental Kryptotal Front tire (DH Casing) measured up at 2.4″, true to its namesake size, on a 26mm internal width rim 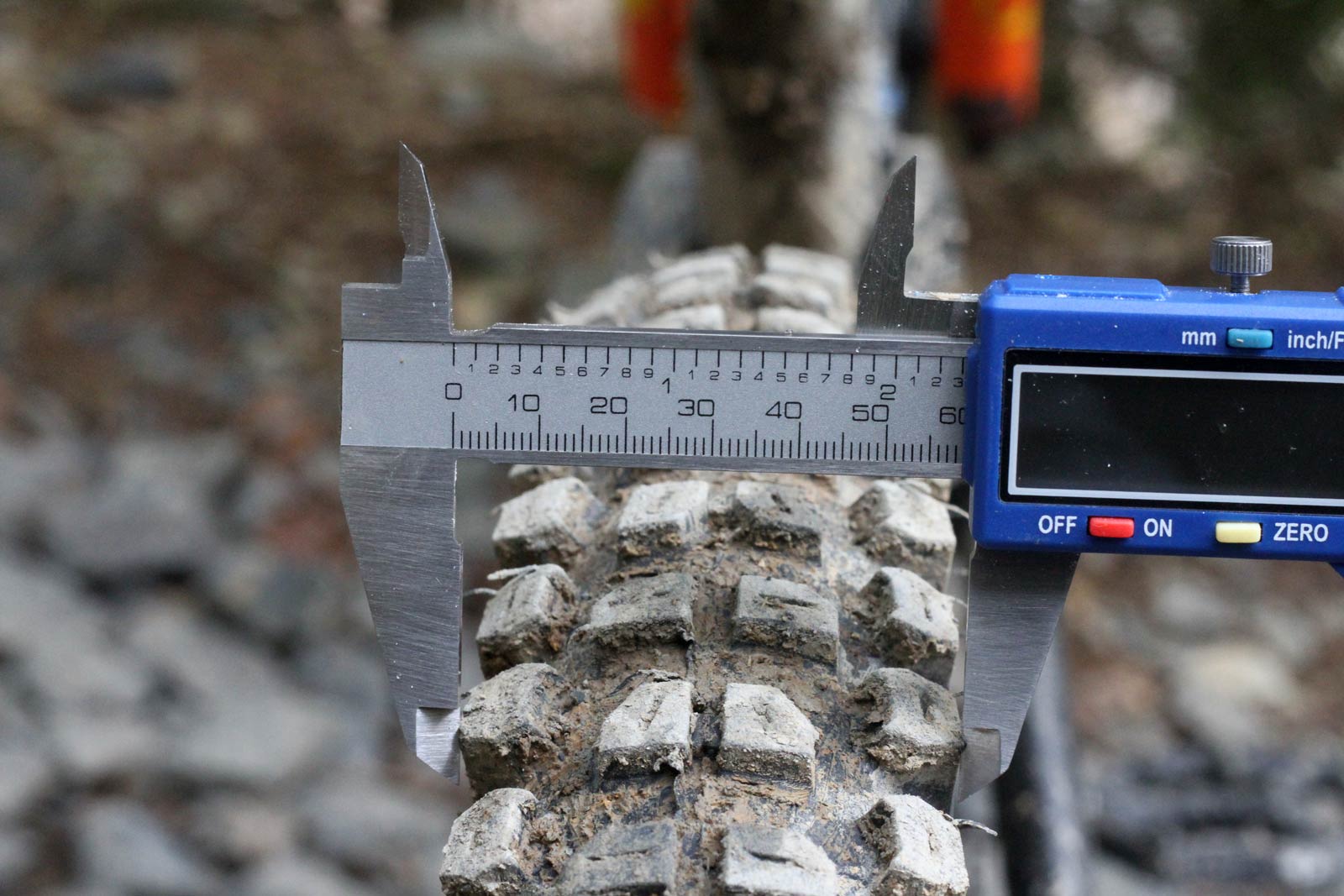 The Continental Kryptotal Rear tire (29″ x 2.4″) measured up at 2.35″ (yes, the battery in the digital caliper decided to give up the ghost at this opportune moment) on a 26mm internal width rim

Under the rubber, the slate-rock surface of Dyfi Bike Park’s easiest (but still not very easy) red-graded trail, Super Swooper, was a tad damp. Riding a new bike, on new terrain, on new tires, on a trail littered with multiple blind crests and loose insides, I rode my first couple of laps with a lot of respect. With the exclusion of two runs, I spent almost the entire day riding this same line to get familiar with the features, to make sure that I got some full speed runs in by the end of the day. 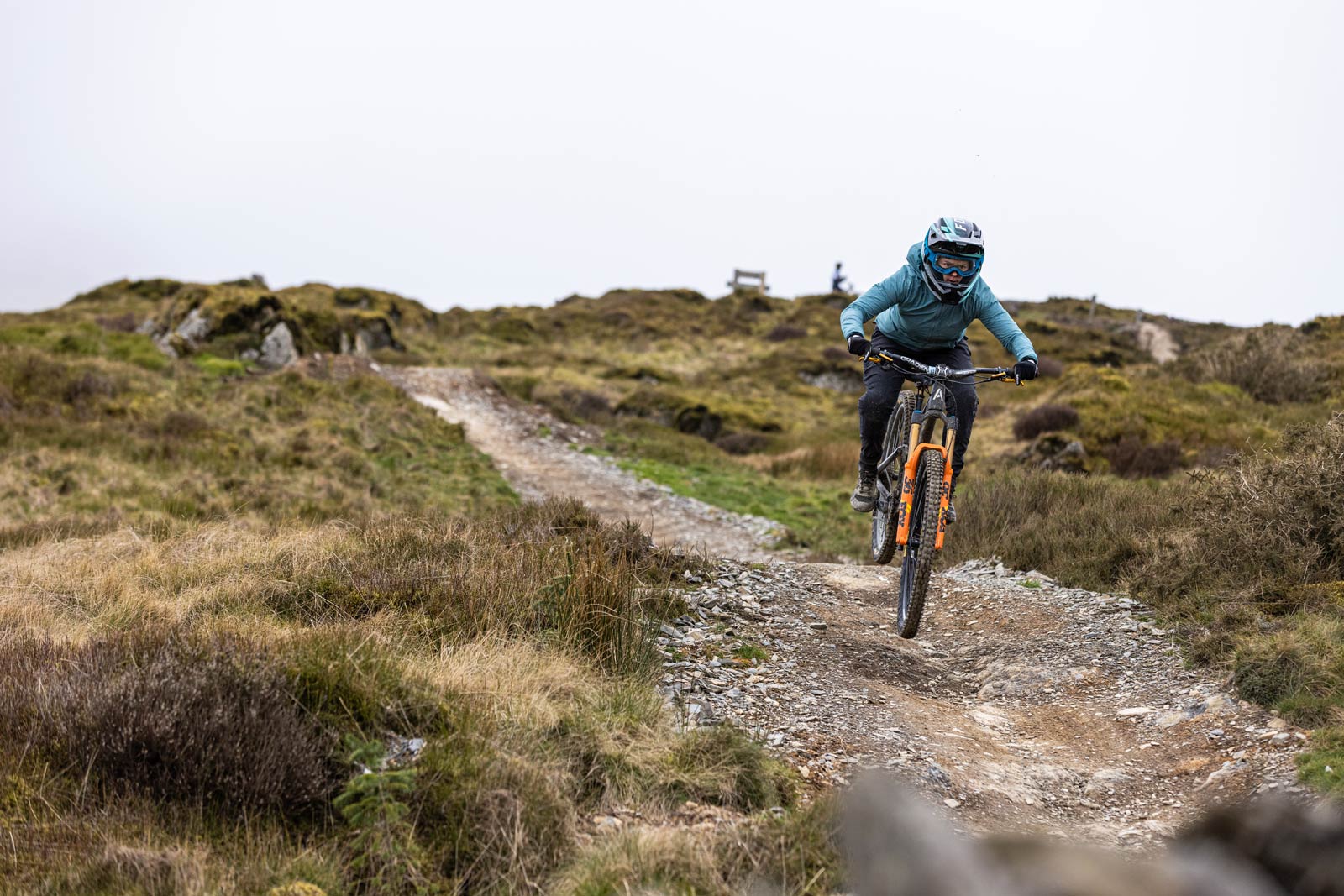 The track starts out atop the open hillside on wide, fast berms. It then cuts through a tunnel as it intersects one of the Back Graded jump lines, before barreling into a dense woodland with ruts as high as the handlebar. The turns are tighter here, but not too tight, offering all the support you’d ever want. There is little in the way of roots. The track then speeds up again into its final third, with lips of varying in gradient and length to keep you on your toes. By the third lap of the track, I’d say I was having actual fun, riding it as it was built to be ridden rather than casing every double in sight. 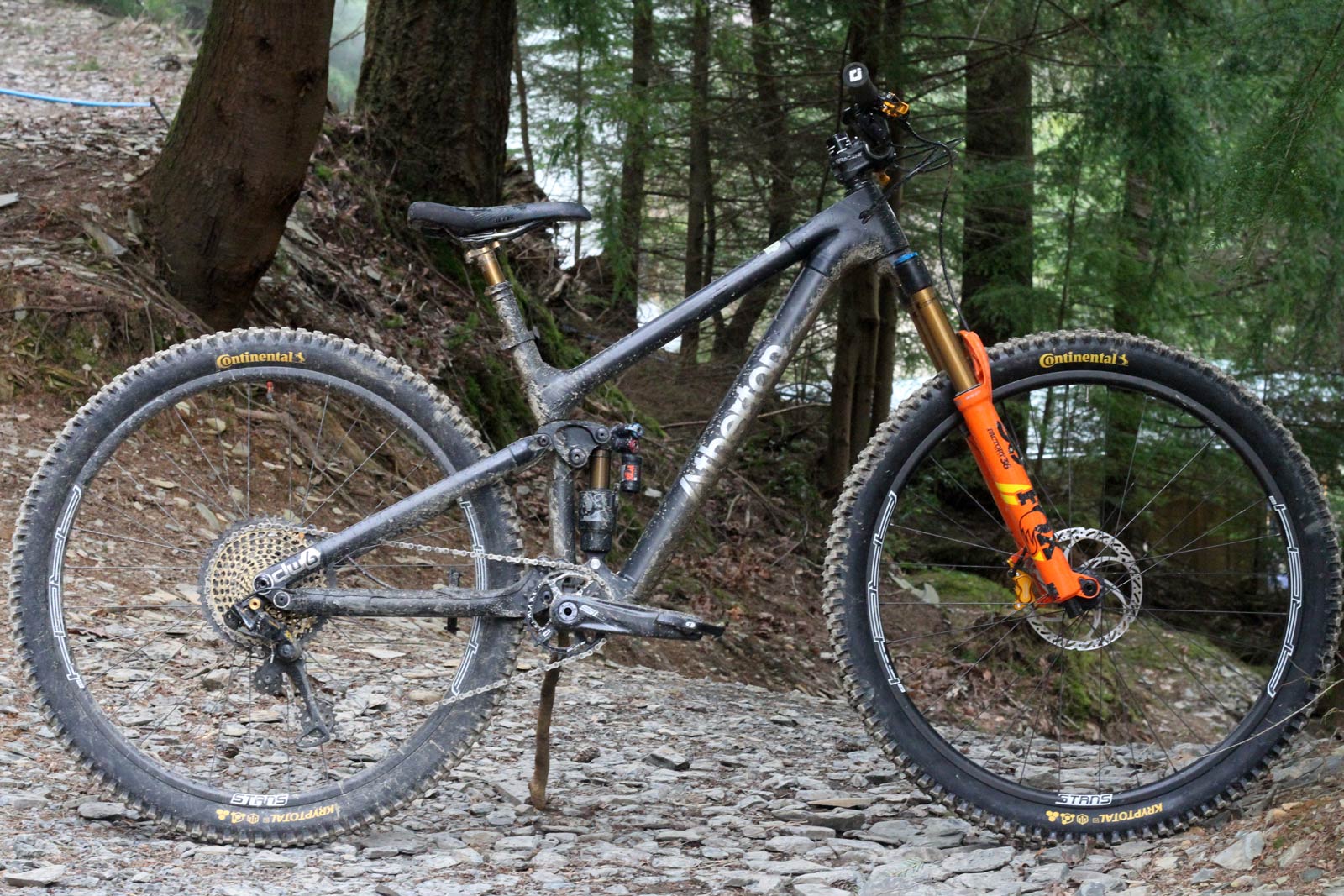 At those pressures, the Kryptotal’s 110 TPI DH Casing felt plenty supple enough, and i’m pleased to report I felt no pinging sensations over the loose, sharp-edged rocks encountered on track. I was really impressed with the front tire’s braking, especially considering the hard-pack tracks were a bit wet and slimy in places. It felt very controlled, able to slow the bike down safely, instead of slipping and skipping over the wet rocks. 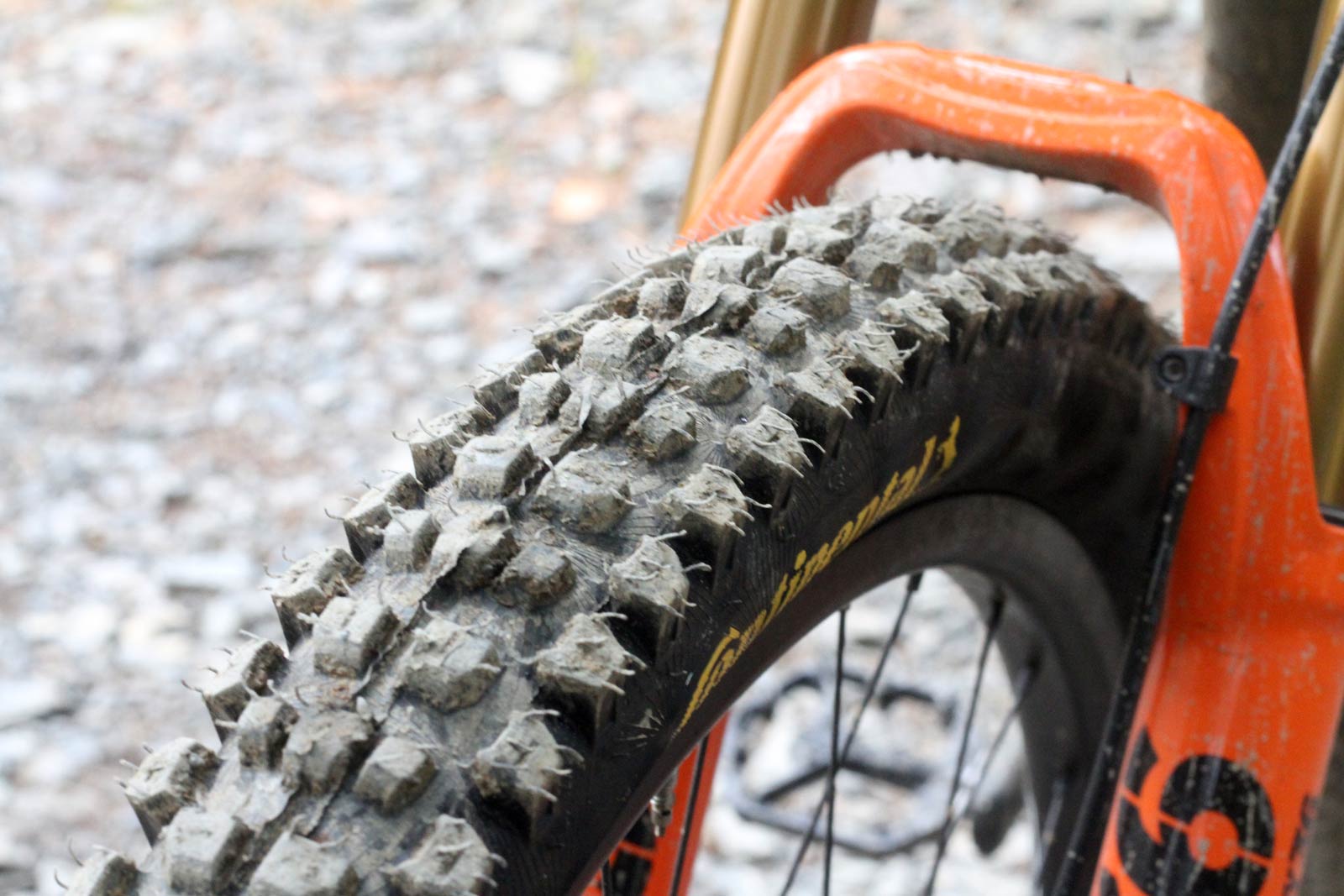 As I started to hit the berms on the lower section of the track with more speed, the tire held its shape with no drama to report; no squirming, pinging or burping air. To be fair, this doesn’t really surprise me in the slightest. The DH Casing carcass construction is fairly robust, as you might imagine. It is 2-ply, so there are 4 layers of 110 TPI that run bead-to-bead, while another two layers of fabric are added to the tread region for extra puncture protection. At the bead, there is also an Apex insert that extends around a third of the way up the side wall, adding extra stability.

On these well-ridden compacted tracks, the Kryptotal tires felt fairly fast-rolling, despite their SuperSoft compound, credit to the pronounced ramping (especially on the rear) at the center tread. By the end of the day, I had no problems retaining the necessary speed to back side the doubles on the Super Swooper track. The tires always felt sure-footed in when cornering hard, with no vagueness at higher lean angles.

A large majority of the tracks at Dyfi Bike Park contain large to extra large jumps, none of which I was remotely interested in riding. It does however, have another red-graded trail on which tires are almost always in contact with the ground; Turns in the Ferns. This one has more rooty goodness, as well as some some steeper, narrower sections with some awkwardly embedded wet rocks. I had no issue with the tires over wet roots; on the occasions where I didn’t unweight in time, the tire gripped reliably and I was able to hold the line. 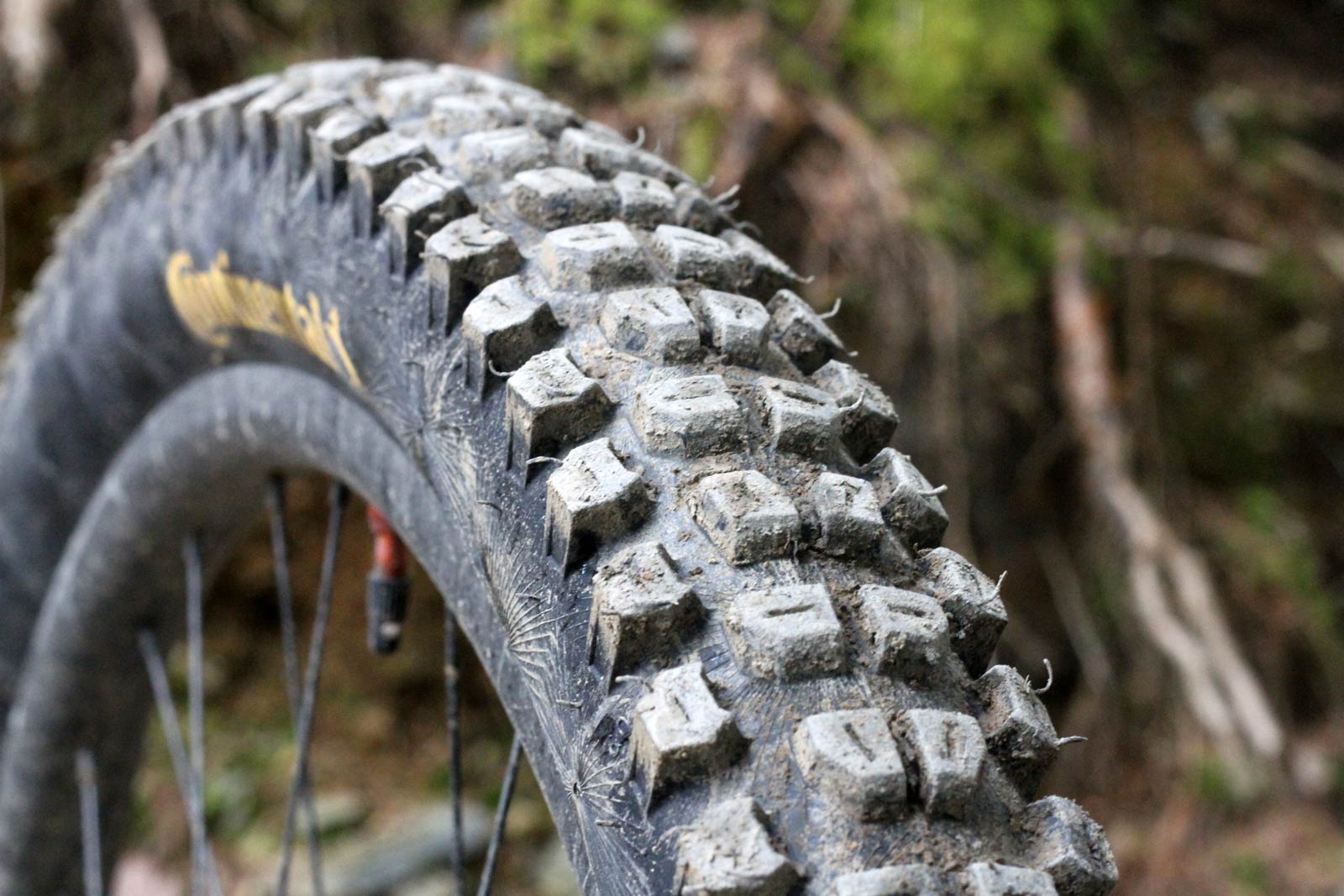 While I enjoyed the controlled braking characteristics of the front tire, I found those of the rear tire to be less than ideal. Yes, it’s the trailing tire, so skidding at the rear is always going to be a more frequent event. That said, my experience of the rear tire was that it was either rolling, or skidding, and not really doing much in between those two extremes. The wet rock was definitely not helping, to be fair. 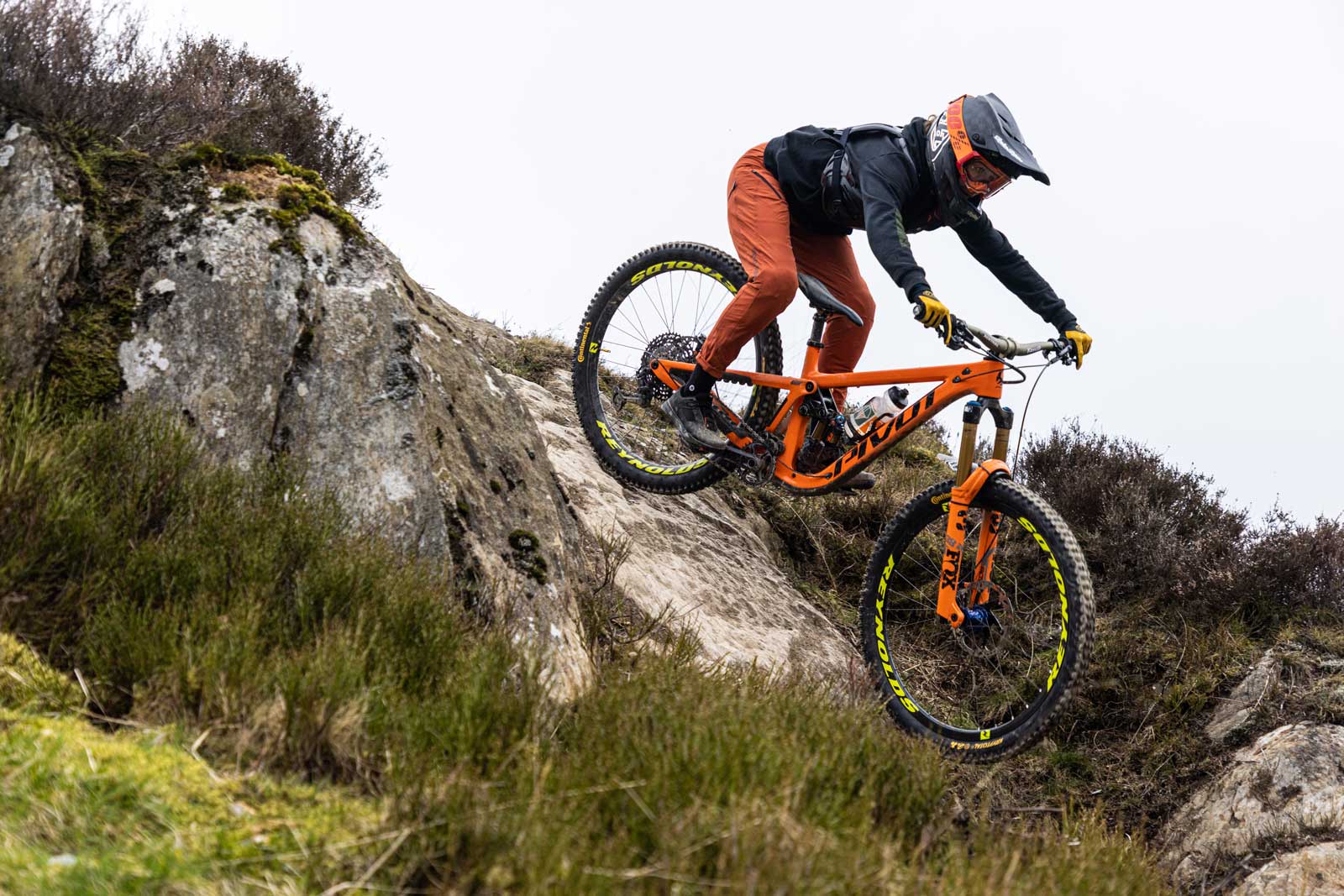 At this launch event, the number of celebrities far outweighed the number of journalists. Emilie Siegenthaler of Pivot Factory Racing was one such celebrity, a woman with a 15-year history of racing World Cup Downhill. She is now retired from racing, but is sticking around with Pivot to mentor up and coming rider, Jenna Hastings. I spent a very exciting afternoon trying to stay on Emilie’s wheel, and in the land-rover shuttle back to the top, we discussed our experience of the Kryptotal tires.

She too, had a similar experience of the Kryptotal Rear, choosing to run the Kryptotal Front tire on the rear, as well as the front, specifically because she prefers its braking characteristics.

The claimed weight for the Kryptotal DH Casing SuperSoft tire in 29″ x 2.4″ is a pretty svelte 1,290g. We can’t verify that yet but some of the Argotal and Kryptotal Enduro and Trail Casing tires came up a fair bit heavier than their claimed weights when we weighed them on our Park Tool scales.

Ultimately, I feel the Enduro Casing (claimed weight of 1,125g) would likely be sufficient for my weight and riding style, thus I have the Kryptotal Front Enduro Casing Soft Compound tire on its way to me in Scotland so I can test it out on the familiar, softer, slower-speed enduro tracks of the Tweed Valley. I’m interested to see how they perform in flat, unsupported turns where the side knobs have to work harder for grip.

Continental’s new Gravity Range tires have a starting retail price of 59,95 €. Price will vary dependent on model and variant.