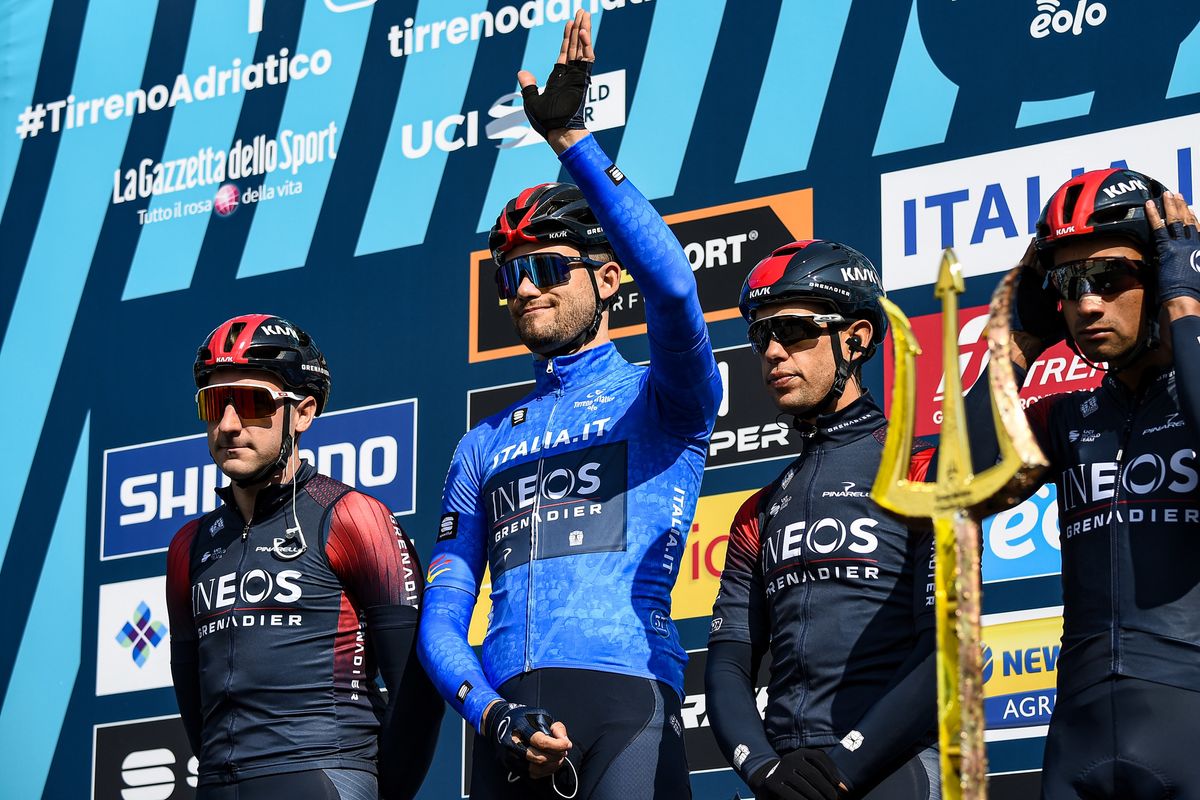 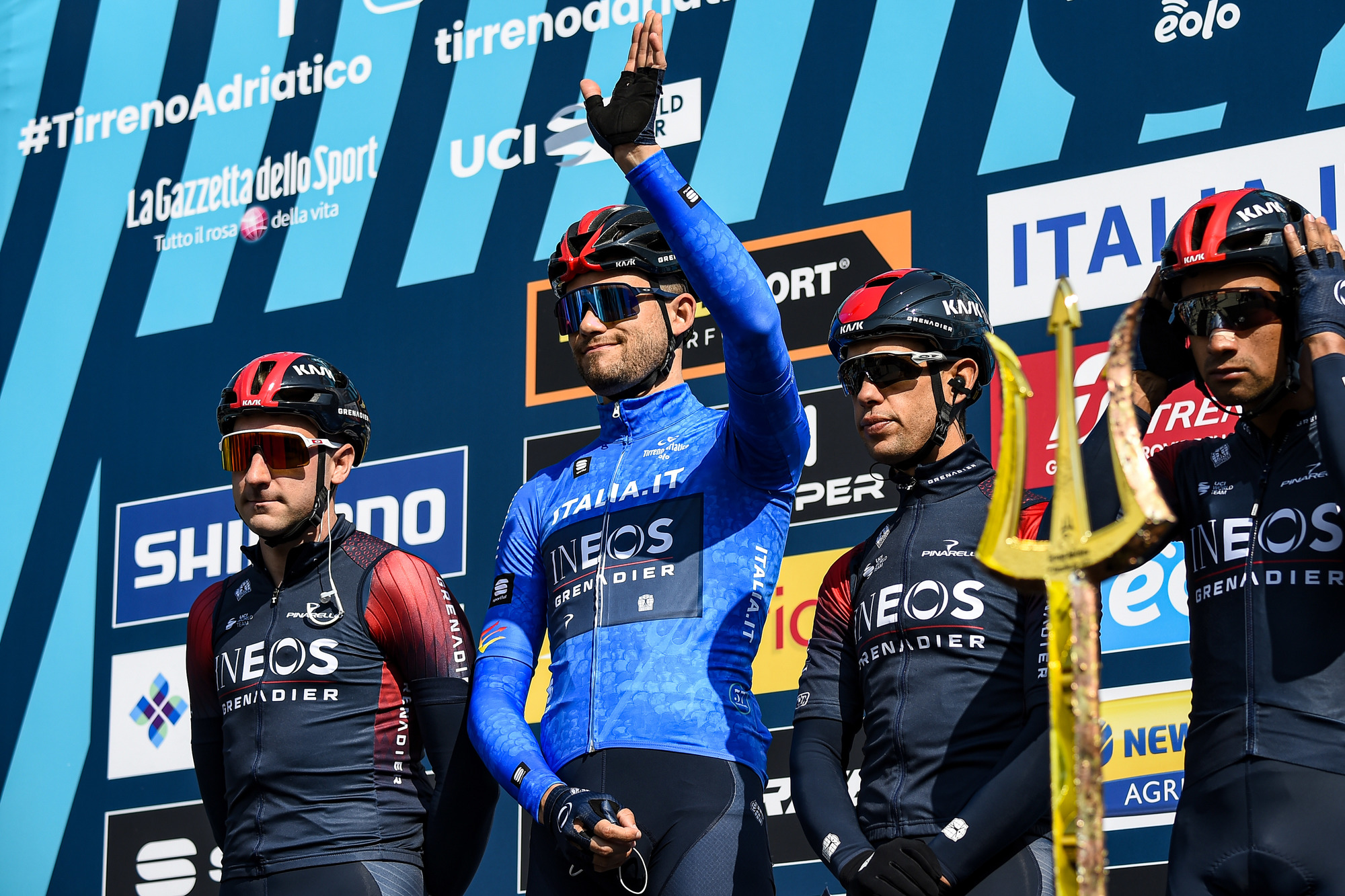 Filippo Ganna spent the long stage 2 of Tirreno-Adriatico in the leader’s azzurra jersey, defending the race leader after his time trial win and then trying to lead out fellow Italian, friend and Ineos Grenadiers teammate Elia Viviani in the sprint finish to Sovicille.

Yet he was also looking further down the road beyond the daily responsibilities of stage racing.

High on his mind are thoughts on how long he can hold off Remco Evenepoel (QuickStep-AlphaVinyl) and Tadej Pogačar (UAE Team Emirates) on the uphill finishes to come at Tirreno-Adriatico, and even thoughts Milan-San Remo – perhaps a late power attack on the Poggio that could make him the next Italian to win La Classicissima.

Ganna does not immediately spring to mind as a Milan-San Remo contender, being neither a sprinter for Via Roma, nor a puncheur who can jump away over the top of the Poggio. But he is an Italian who has grown up watching Milan-San Remo year after year, and so dreams about one day winning it.

“I think for any Italian guy, it’s a really important race. It’s a big Classic and we’ll see if we can win it for Ineos Grenadiers,” he said carefully on Tuesday, explaining it as a team goal but including his name in the roster for the first Monument of the season.

In his career, Ganna has been able to use his huge time trialling power to make gravity-defying efforts on climbs. He recently produced beyond-his-weight rides at the Tour de la Provence and again at the UAE Tour, combining his time trial torque with racing aggression.

Having said at the start of the year that, “there will be nice opportunities to show that I’m not ‘simply’ a time trialist or a track rider”, Ganna’s impressive efforts sparked suggestions that he could one day could become an Indurain-style GC heavyweight or transform from team pursuing and time trial to targeting a Grand Tour like Bradley Wiggins. In truth, Ganna prefers Francesco Moser as a role model and will also target the cobbled Classics and Paris-Roubaix after Milan-San Remo.

At last year’s Milan-San Remo, Ganna used his power and speed to set a fast tempo for much of the Poggio with his teammates lying in his huge slipstream. His pace saw off a number high profile sprinters and stopped attacks but ended his own race.

Ineos Grenadiers and everyone else were then unable to respond when eventual winner Jasper Stuyven (Trek-Segafredo) attacked inside the final two kilometres to seal a memorable win.

Some critics, especially in Italy, felt that Ganna had been sacrificed and used as a domestique when he should have instead been given a protected role and allowed to make a real attack on the Poggio. In response, the Italian took to Instagram to defend his role in the race, and the tactics used by the British team.

“For the last three days after Tirreno-Adriatico I’ve been suffering from a bit of flu. The [tactical] decisions for Milan-San Remo are a consequence of that,” he said last year. “So please let’s not all play at being a DS with all the ifs and buts.”

12 months on, and the expectation are even higher. Ganna has become Italy’s biggest cycling star and so the Italian favourite to some for a homegrown win in San Remo.

This year he is not shying away from the responsibility. Indeed, he should have ridden Paris-Nice as he prepares to make his Tour de France debut in July. However, he pushed to instead ride Tirreno-Adriatico and so enjoy a true Italian build-up to Milan-San Remo.

“My shoulders are pretty large and so I can handle the expectations,” he said when asked about the growing expectations.

But can he win Milan-San Remo?

“Who knows? nothing is impossible,” he replied, accepting the challenge.