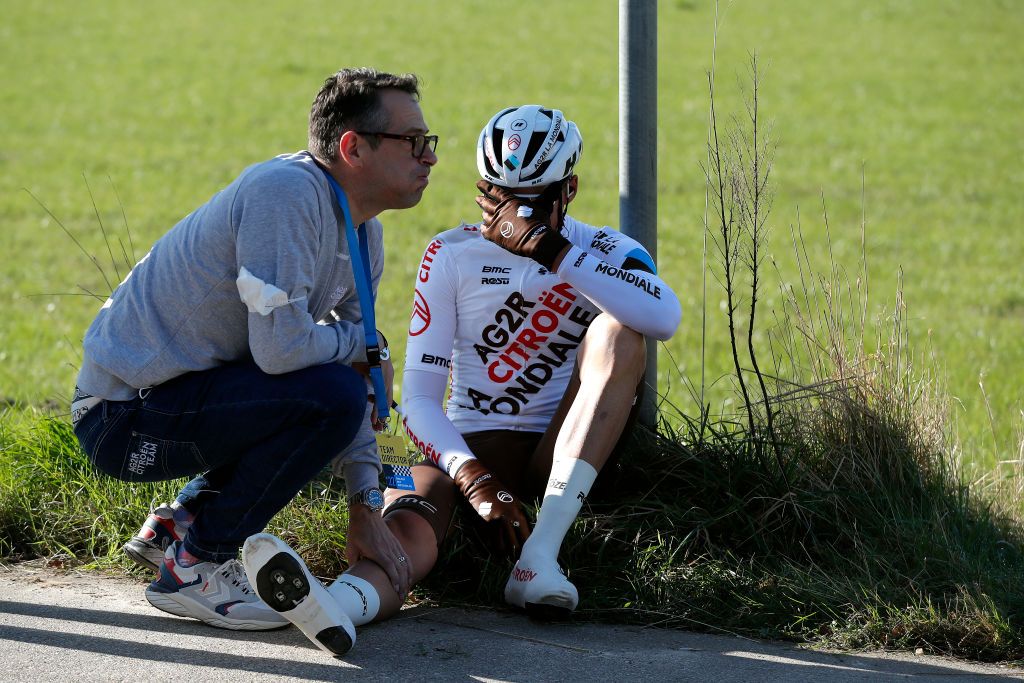 “Victim of a fall in the first kilometres of the Omloop Het Nieuwsblad, Lawrence Naesen will be operated on this evening for multiple fractures of the collarbone. The duration of his unavailability will be known later,” AG2R Citroën wrote in a medical update after the race.

Naesen was replaced by Stan De Wulf on the AG2R Citroën team roster that raced Kuurne–Brussel-Kuurne on Sunday.

It is unclear where Naesen crashed on the course at Omloop Het Nieuwsblad but there were two significant crashes, with the first at 55km to go in the elite men’s 204.2k race between Ghent and Ninove.

The crash included Luke Durbridge (BikeExchange), Victor Campenaerts (Lotto Soudal) and Alessandro Covi (UAE Team Emirates), among others. Campenaerts was able to get back on his bike and he finished 5th place on the day while Covi and Durbridge did not finish the race but both were back for Kuurne-Brussel-Kuurne.

The second crash, which involved Gaviria, took down several riders at the 41km to go mark. Video footage showed Gaviria hitting the pavement and then sit up on the roadway holding his left shoulder in obvious pain. He was treated at the side of the road by medical support before being taken to hospital for further assessment and treatment.

“Unfortunately after a crash earlier today in Omloop Het Nieuwsblad we can confirm that Fernando Gaviria has a displaced clavicular fracture and will undergo surgery. Get well soon Fernando,” confirmed UAE Team Emirates in a medical update.

Gaviria had a strong start to the season with two victories at the Tour of Oman earlier this month. However, he was ruled out of the UAE Tour held from February 20-26 after testing positive for COVID-19 for a third time in two years.