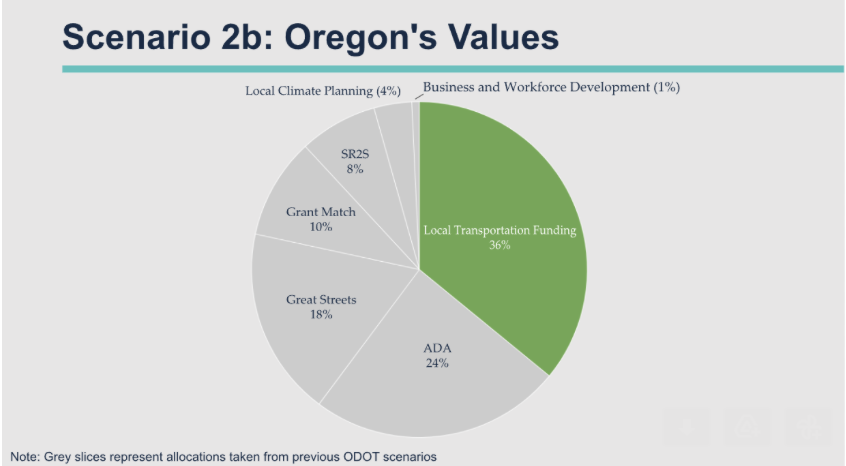 An outline of Scenario 2b, which has been touted by some transportation and climate advocates as the best way to spend flexible funding.

The Oregon Department of Transportation (ODOT) has $400 million in federal infrastructure funding burning a hole in its pocket, and there’s still time for you to give your thoughts on where it should go.

In the past few weeks climate and transportation activists, along with elected officials, have raised their voices to make it clear that ODOT should spend this money – which is part of $1.2 billion headed headed ODOT’s way thanks to President Biden’s Infrastructure Investment and Jobs Act (IIJA) – on projects that will improve active transportation and reduce greenhouse gas emissions.

In an email to supporters earlier this month, House Rep. Khanh Pham (D-Portland) wrote, “With so much of ODOT’s revenue specifically earmarked for road projects, it is imperative that every flexible dollar be spent on green infrastructure investments.”

ODOT has developed four scenarios for spending this money:

A coalition that includes groups like No More Freeways, Bike Loud and The Street Trust are pushing their own creation, Scenario 2b, that focuses even more on public and active transportation.

According to André Lightsey-Walker, a public policy advisor for Rep. Pham, 2b is modeled from ODOT’s own funding Scenario 2 (Public/Active Transportation). Unlike ODOT’s scenario however, 2b would reallocate all the funding for Enhance, Fix-it, and Maintenance categories ($158 million) to a new category called “Local Transportation Funding.” “Local Transportation Funding dollars would then be directed to local jurisdictions across the state allowing these agencies to determine how to best use the funds to meet their community’s specific transportation needs,” Lightsey-Walker shared with BikePortland.

Rep. Pham and advocacy group leaders testified at a special Oregon Transportation Commission (OTC) meeting on February 17th that was called specifically to hear feedback on the IIJA.

“You have the opportunity to invest wisely this year in the transportation we need for the future. Please don’t invest in roads for car transportation,” Cathy Tuttle, a Bike Loud PDX board member, wrote to the OTC in public testimony ahead of the February 17 meeting. “We have overbuilt and opened every bridge [and] every bit of asphalt to large, heavy vehicles without planning for long-term maintenance. It’s time to step back and rethink the streets and bridges we truly need and the equitable climate future we want to leave to future generations.”

Rep. Shelly Boshart Davis, a Republican and co-vice chair of the legislature’s Joint Transportation Committee, was a loud voice against Scenario 2b. She wrote a letter and testified to the OTC that new federal funding should be used to speed up promised highway expansion, bridge, and other projects from House Bill 2017. Rep Boshart Davis said she has “every confidence in the OTC’s good judgment” and, in what appeared to be shade toward climate and transportation justice advocates said, “We need to spend these dollars where they will benefit the most Oregonians – not just the loudest ones.”

You can still tell ODOT how you think they should spend this money in an online survey, open through today (Monday 2/28) at 5:00 pm. The written public comment period is open through March 8th at 4:00 pm. Comments will also be heard at the OTC monthly meeting March 10th and a special meeting dedicated to IIJA discussion is slated for March 30th.