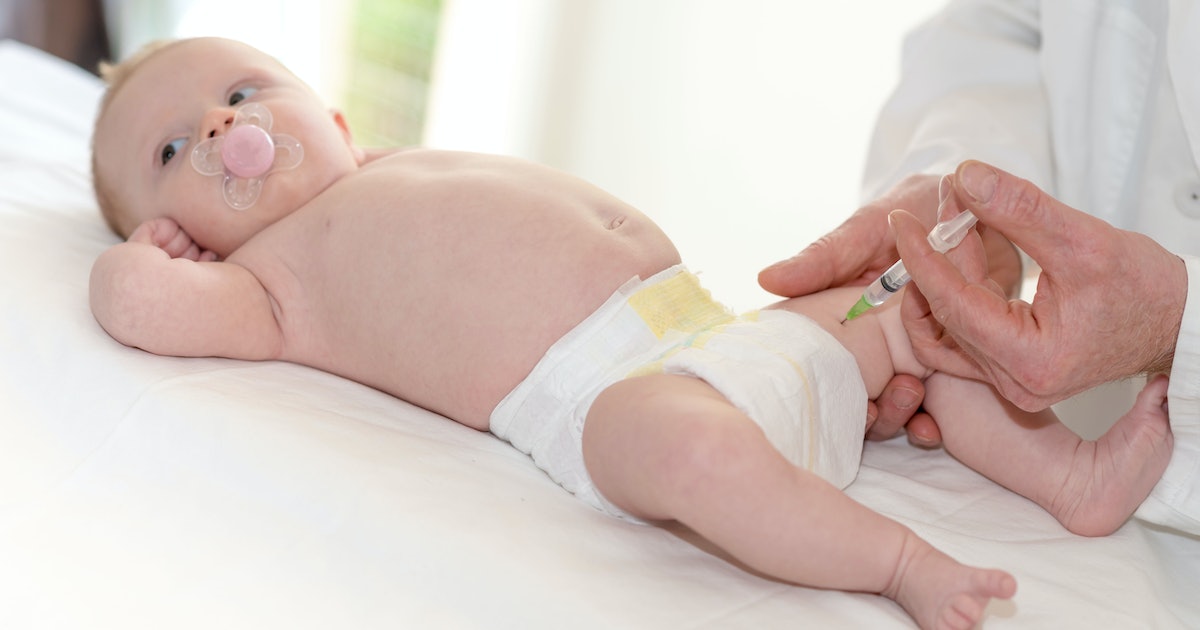 Guess who’s about to proffer a lollipop bribe while her child screams bloody murder in a CVS? This lady! Because it’s once again time for ye olde dreaded influenza shot. Alas, many children may be required to get not only one flu shot, but two, in order for the vaccine to be more effective. If you have an infant at home, you might be wondering — do babies also need two flu shots?

Flu shot time — or as I like to think of it, The Annual Shriekfest That Ends With Mommy Stopping By the Wine Store — is a drag no matter what. But a much bigger drag is watching your child come down with this awful illness. The flu can be extremely serious and dangerous in some cases, which is why most pediatricians strongly encourage parents to get their kids jabbed, and some schools even require it.

I reached out to Dr. Jennifer Trachtenberg about whether to give babies a double dose of the flu vaccine. “Dr. Jen” is a pediatrician and parenting expert, and a “spokesdoctor” for the American Academy of Pediatrics. While the flu shot isn’t recommended until a child is six months old, she says children between the ages of six months and eight years need two flu shots when it’s the first time they are ever receiving the vaccine. And the two doses should be at least 28 days apart. (So about four weeks apart.)

Dr. Jen also says it’s best to get the shot before flu season is in full swing, and she strongly encourages parents to go ahead and get the deed done before Halloween. There’s even a whole initiative from the AAP with the hashtag #flubeforeboo. (The initiative also has helpful reminders about flu prevention, like making sure kids wash their hands regularly, and cough into their elbows “like a vampire.”)

Of course, every year there’s talk of the flu vaccine’s “effectiveness,” which can be confusing for some parents, and can make them wonder if the shot is in fact even really necessary? Dr. Jay Berger is the Chief Medical Officer and Chairman of Pediatrics at ProHEALTH Care, and he acknowledges to Romper that yes, some years the flu vaccine isn’t totally on the money. But that most certainly doesn’t mean it isn’t worth it: “It is true that not every year is a perfect match between the flu vaccine and the circulating virus,” Berger says. “However, there is cross-reactivity between strains which hopefully will prevent your child from getting the flu.” At the very least, Dr. Berger says the shot will significantly decrease the severity and duration of the flu. And Dr. Jen backs this up: “The flu shot in children has been shown to decrease the severity of the illness as well as decrease the need for hospitalization for flu-related complications, and ultimately deaths. Approximately 80 percent of children who died of influenza were not vaccinated, and many were otherwise healthy children without chronic disease.”

As for the risks of giving babies the shot? Dr. Berger says that as with all vaccines, there is an increased risk of soreness and redness at the site of injection, and some children may experience low-grade, flu-like symptoms up to a week later. But he is quick to point out that these minor symptoms pale in comparison to what could happen if a baby gets the actual flu.

Dr. Jennifer Trachtenberg, pediatrician and assistant clinical professor of pediatrics at The Icahn School of Medicine at Mount Sinai