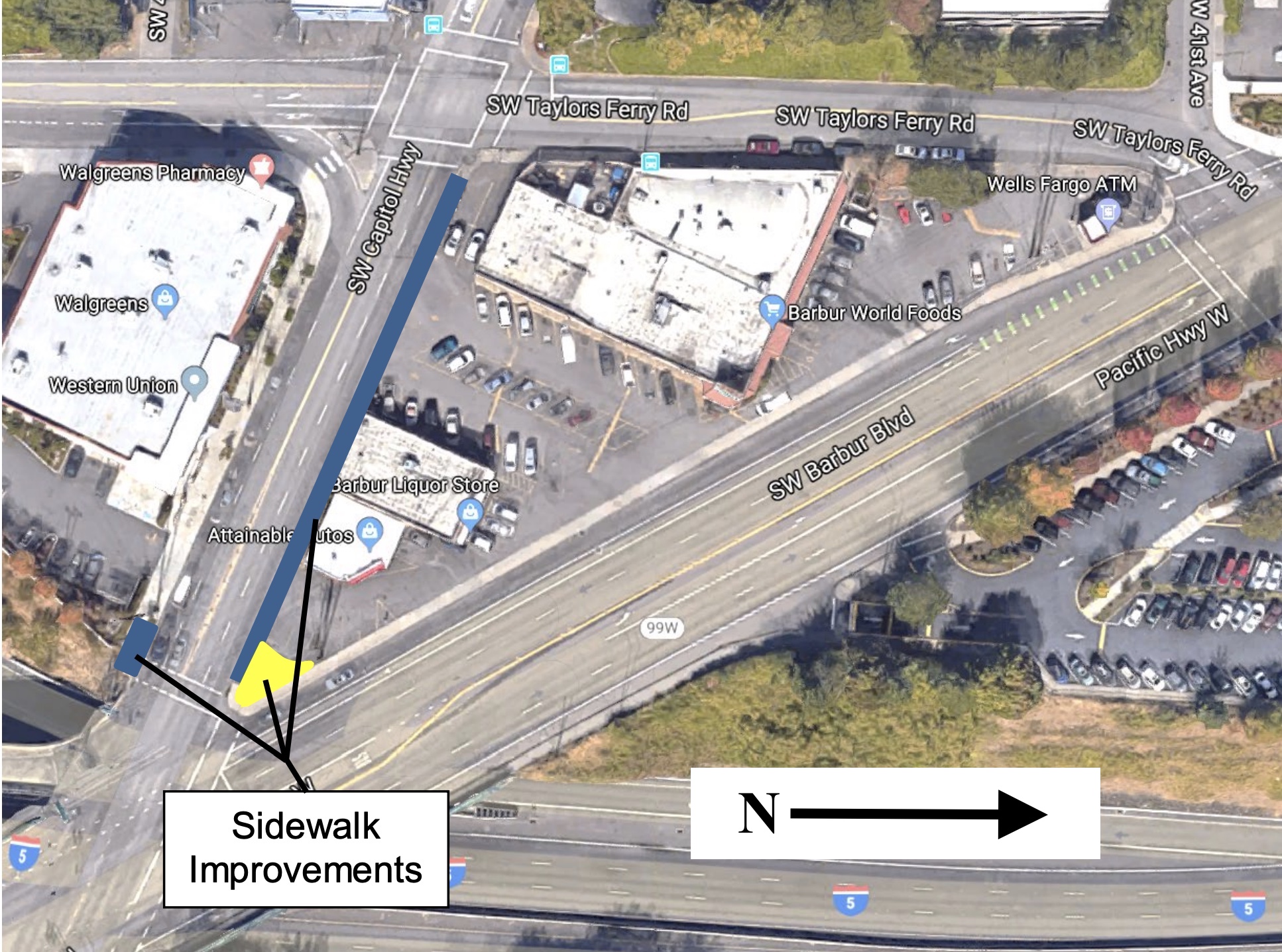 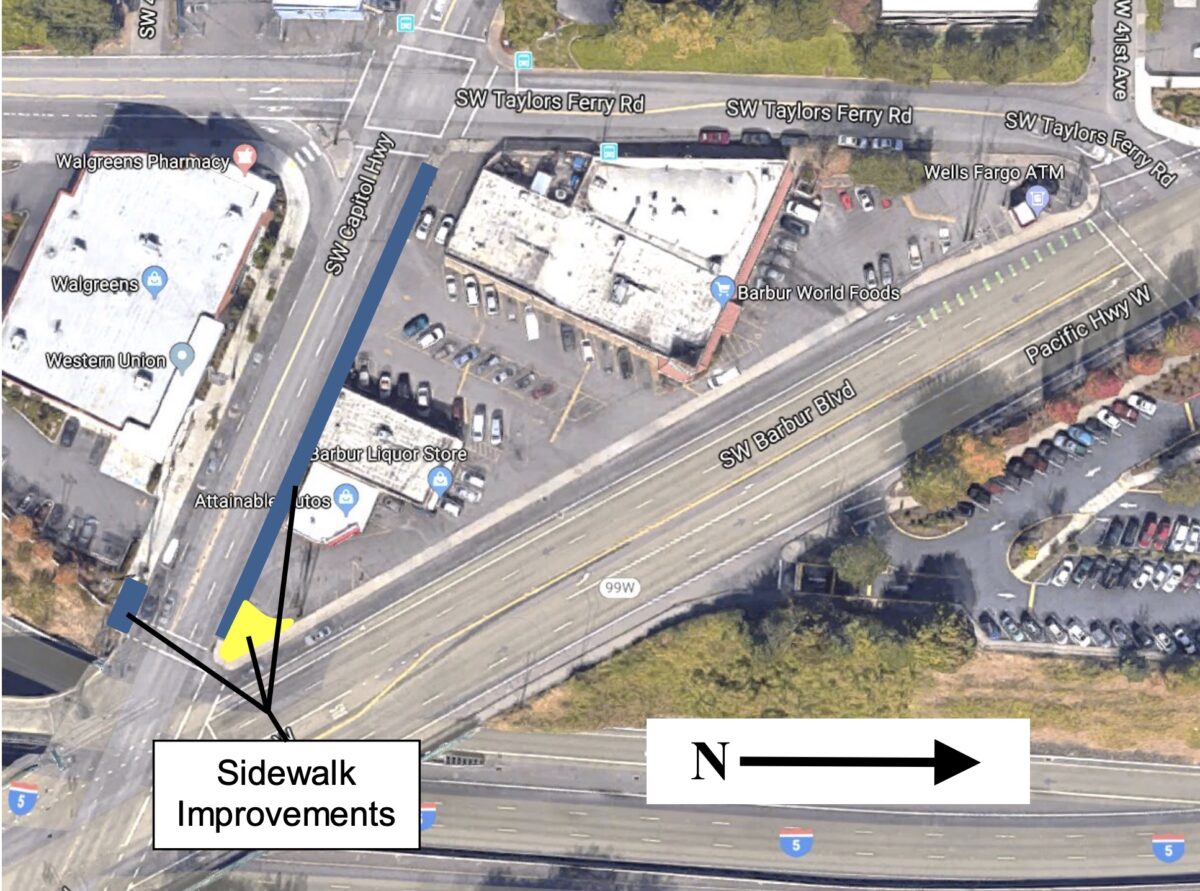 Southwest Barbur Blvd, which runs from SW Capitol Highway to SW Naito Parkway downtown, is one of the main routes from southwest Portland to the rest of the city. It’s also a notoriously dangerous place for people walking and biking.

“We in the community doubt [the project] will improve safety for people walking and biking in the West Portland Town Center.”
— Marianne Fitzgerald, southwest Portland resident

Earlier this month, the Portland Bureau of Transportation passed an ordinance to authorize their share of funding for the Barbur Crossroads Safety Project, an Oregon Department of Transportation project that aims to make it safer for people who walk and bike to navigate a massive jumble of stressful arterials and destinations known as West Portland Town Center. But activists are skeptical this project will garner needed safety benefits.

Back in June we reported that PBOT would work with ODOT to build a bikeway for people riding across Barbur and Taylors Ferry Road on SW Capitol Highway (where it crosses I-5, see above).

Since PBOT is already undertaking a major project on SW Capitol Highway, it wasn’t clear how PBOT and ODOT would work together at the intersection because of project scope boundaries and overlapping jurisdictions.

Through this ordinance, PBOT has agreed to provide $209,000 in local funding to “construct pedestrian improvements” on SW Capitol Highway. This money will come from the Fixing Our Streets ten-cent gas tax and Transportation System Development Charges (TSDCs), which are fees levied on business owners to maintain roads that support their buildings.

According to PBOT, ODOT has hired a contractor to construct a concrete sidewalk and bikeway along the east side of SW Capitol Highway between SW Barbur Boulevard and SW Taylors Ferry Road at its request. This will be a shared-use path. There will also be a pedestrian plaza at the northeast corner of SW Capitol Highway and SW Barbur.

PBOT says that this project “increases space and comfort for people waiting to cross SW Barbur Boulevard on foot or mobility device and provides designated routing for cyclists through the project area.”

According to some local activists, however, this plan won’t be enough. Marianne Fitzgerald, a south Portland resident who has been involved in transportation reform in the area for decades, submitted testimony on the ordinance that stated: “We in the community doubt [the project] will improve safety for people walking and biking in the West Portland Town Center” and that “PBOT’s portion of the project is window dressing to mitigate ODOT’s project that changes motor vehicle traffic circulation and adds a motor vehicle travel lane in a way that will place more people in harm’s way and impede access to the Barbur World Foods grocery store.”

Fitzgerald asked PBOT to amend this ordinance and add a directive to “monitor the safety data in the vicinity of this project and report to the community on an annual basis.”

“If the safety of pedestrians and bicyclists becomes more compromised, or if access to the Barbur World Foods grocery is impeded, PBOT shall work with ODOT to re- evaluate the project and determine immediate and long term solutions that will make it safer to walk and bike within the West Portland Town Center and access the grocery store,” Fitzgerald wrote.

Fitzgerald is concerned that the jughandle redirection of traffic in the BCSP will put people walking and biking in danger and is asking for a specific confirmation from ODOT and PBOT that they will make changes if this is the case.

PBOT Interim Communications Director Hannah Schafer says that the transportation bureau hasn’t found that the new traffic routing will cause safety problems. She says that even if it’s not stated outright in the ordinance (as Fitzgerald requested), PBOT already plans to monitor traffic data with a safety lens as they do with all projects.

Unfortunately neither PBOT or ODOT has a plan for how to create safe cycling space on SW Capitol Hwy between Barbur and SW Huber (south of the location covered by this ordinance).

As we said in an article in June, this area is likely to remain a high-stress, car-centric environment regardless of the bike facilities that are included. Some form of bike passage is better than none, but there will need to be more substantive changes made for people to truly feel safe walking or biking through the Crossroads.