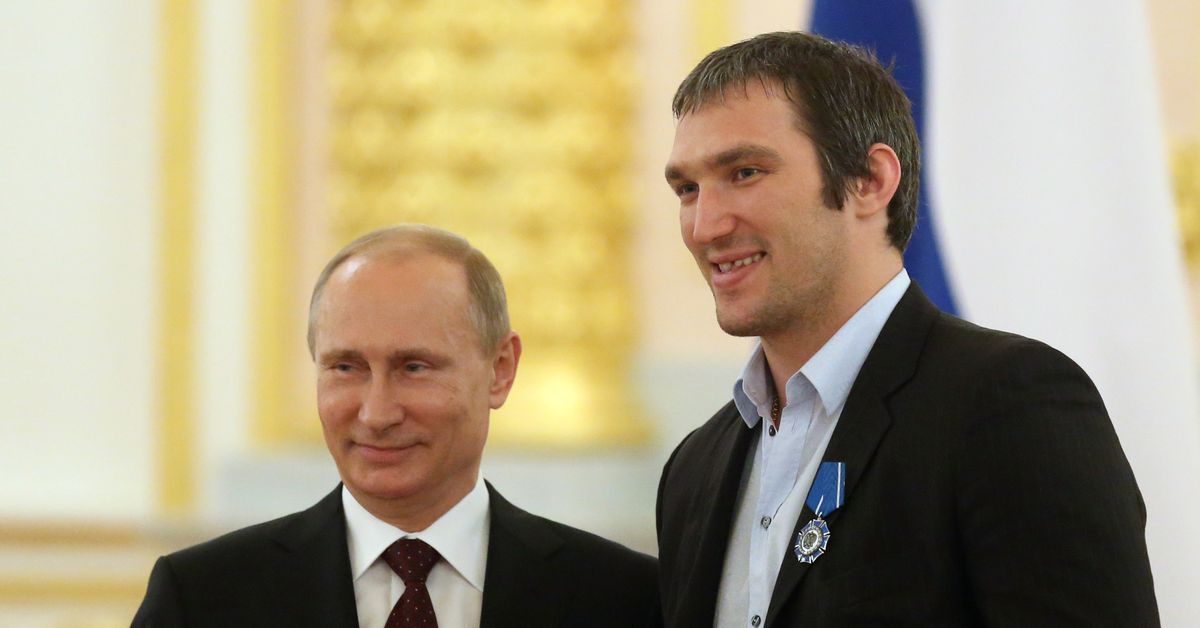 Alexander Ovechkin was given a chance to be brave, to take a stand — and in the end he remained a sycophantic coward.

After dodging media availability for much of the week, Ovechkin finally spoke publicly about Russia’s invasion of Ukraine. If you were waiting for him to try to make a strong statement, I’m sorry to let you down — because his comments published by The Athletic were pathetic.

“It’s a hard situation. I have family back in Russia and it is scary moments, but we can’t do anything. We just hope it going to be end soon and everything is going to be all right. Please, no more war. It doesn’t matter who is in the war – Russia, Ukraine, different countries – I think we live in a world, like, we have to live in peace and a great world.”

The thing is: It absolutely does matter who is in this war. Especially when your home country is the aggressor, manufacturing fake excuses for war, committing atrocities against civilians, and arresting over 2,000 Russians for peacefully protesting the invasion. Furthermore, for Ovechkin to say he’s helpless is a disingenuous attempt to downplay his importance. As the most famous Russian athlete playing in a western market, who is venerated at home for playing the nation’s most popular sport, he could make a difference by speaking out — he chose not to.

As relatively soft as this opening was, it’s what Ovechkin said next that was beyond reprehensible considering the circumstances.

“Well, he is my president. But how I said, I am not in politics. I am an athlete and you know, how I said, I hope everything is going to be done soon. It’s (a) hard situation right now for both sides and everything. Everything I hope is going to end. I’m not in control of this situation.”

Ovechkin saying he’s “not involved in politics” is an absolute, bald-faced lie. At every corner he has venerated and celebrated Vladimir Putin. His Instagram feed is full of photos of Putin over the years, going so far as to even wish the Russian president happy birthday, to read a speech written by Putin at his wedding reception. Those are inherently political acts when you’re talking about an authoritarian ruler, because if that’s not tantamount to a public endorsement, then this sure as hell is.

You don’t get to feign being politically agnostic while establishing a fan site for Vladimir Putin. Keep in mind that Ovechkin launched this initiative in 2017, after the annexation of Crimea, after the trial of the band Pussy Riot, after Putin had all his political enemies imprisoned or forced into exile for disagreeing with him, after the Russian president insinuated that all members of the LGBTQ community were pedophiles, passing oppressive laws against homosexuals. Ovechkin knew exactly who Putin was, what he was capable of, and he celebrated the Russian president anyway.

This has all been enabled by a media machine terrified of losing access to Ovechkin. When it comes to the Capitals and the NHL he’s one of the league’s biggest draws — but time and time again nobody has pressed Ovechkin on his relationship with Putin over the years. It’s allowed him to operate comfortably in a zone where he can benefit from his relationship with the Russian president, without having any discomfort from this involvement.

Domenik Hasek, one of the most decorated NHL goaltenders of all-time, didn’t mince his words when it came to Ovechkin’s response.

What!? Not only an alibist, a chicken shit, but also a liar! Every adult in Europe knows well, that Putin is a mad killer and that Russia is waging an offensive war against the free country and its people. The NHL must immediately suspend contracts(contin)https://t.co/BQnQaf76L7

Hasek went on to suggest the NHL suspend the contracts of every Russian NHL player, which is unquestionably an unfair overreach — but we can, and should hold the feet of Putin enablers to the flames and make them uncomfortable for having a relationship with a ruthless warmonger whose corruption has made him one of the wealthiest people in the world, and his iron fist has ensured nobody challenges him. For years they have benefitted from keeping a close relationship with the Russian ruler, now they deserve to face the music.

On some level you can understand why Ovechkin may want to distance himself. There is no doubt a risk to his family in Russia for speaking out, but there are times in life for bravery — and this was one of them. Furthermore, the immense resources Ovechkin has at his disposal could have easily ensured his family left the country before this war broke out. The world knew this was coming for weeks before the actual invasion. This war has led to unspeakable bravery, whether that’s from those taking up weapons in Ukraine to defend their country, or those in Russia willing to be imprisoned for having a voice. Oveckin had a chance to take a stand, to make a difference, and he tucked tail and lied instead.

Of course, this all assumes Ovechkin actually gives a shit about the lives of Ukrainians more than his buddy, and that’s unclear. We do know that despite seeing his friend start a war earlier this week he still said “Well, he is my President,” as if that whitewashes away everything — and in Ovi’s mind, maybe it does. That’s the most disgusting part of all this.