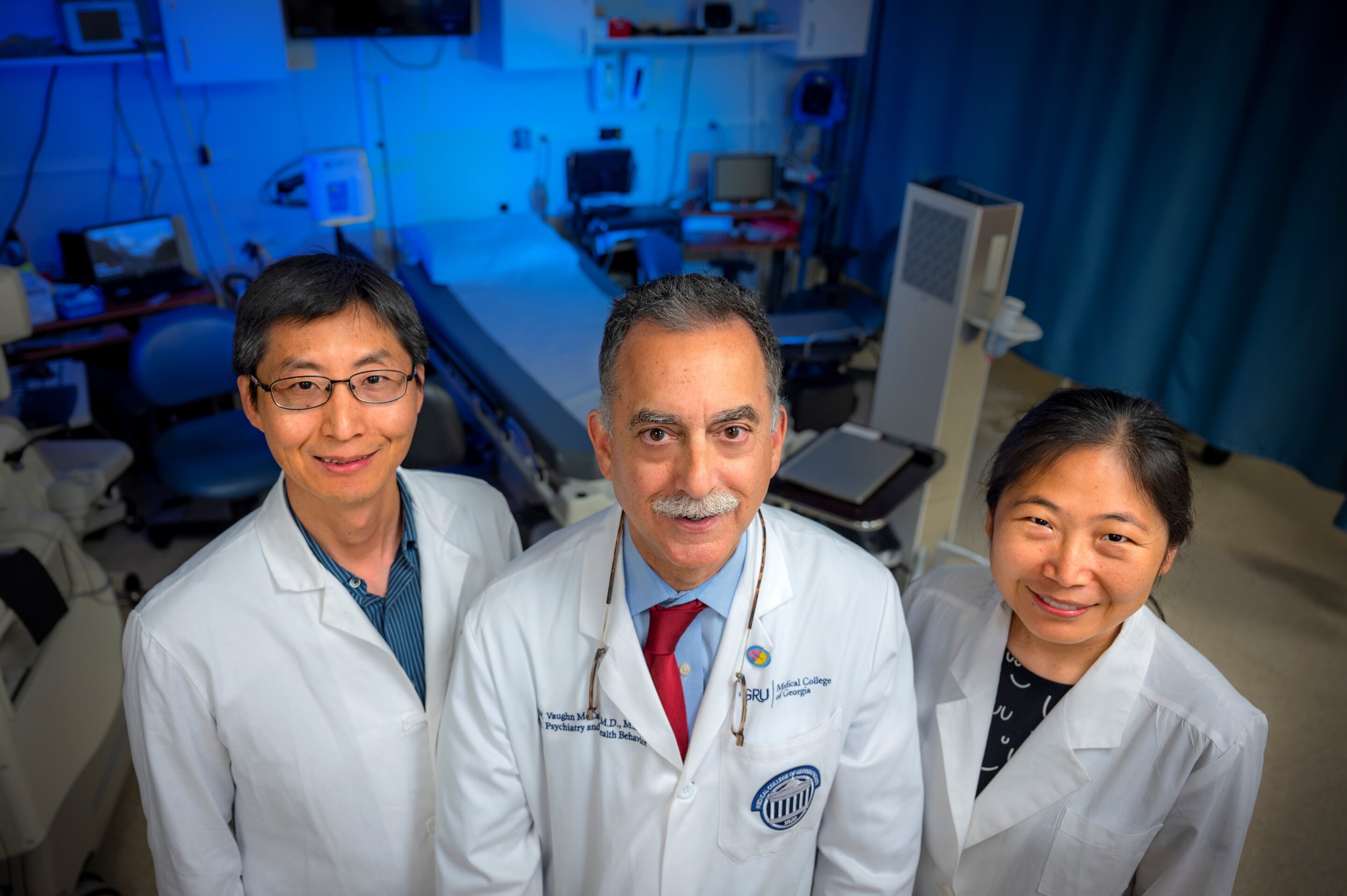 A graph of how long Americans sleep forms a U-shaped pattern across our lives, with age 40 being the low point and hours of sleep starting to creep back up about age 50, Medical College of Georgia investigators report.

Our sleep efficiency, which basically means how much of the time we devote to sleeping that we actually sleep, tends to decrease across our lifetime, but investigators were surprised to find efficiency stabilized from ages 30 to 60, says Dr. Xiaoling Wang, genetic epidemiologist at MCG’s Georgia Prevention Institute and corresponding author of the study in the journal Scientific Reports.

True sleep time is tough to measure in a large database of individuals who provide a representative sample of the country, particularly since most assessments are self-reports of sleep, says first author, Dr. Shaoyong Su, also a genetic epidemiologist at the Georgia Prevention Institute and the study’s first author.

The main innovations in the study include its representative sampling technique, broadly inclusive age and the use of accelerometers to measure movement and get a more objective idea of how much participants slept.

For this study, investigators used what is considered a representative sample of 200 million Americans: 11,279 participants age 6 and older from the National Health and Nutrition Examination Survey, or NHANES, which focuses on different populations or health topics. Data on these participants was collected from 2011-14 but released in late 2020, and this is the first time that 24-hour accelerometer data was available in a nationally representative sample.

Participants wore accelerometers on their nondominant wrist 24-hours a day for seven consecutive days. While the device does not directly measure sleep time, the premise is that measuring movement gives you some indication of whether you are asleep or not, says coauthor Dr. Vaughn McCall, chair of the MCG Department of Psychiatry and Health Behavior and an expert in the trifecta of insomnia, depression and suicide.

“We confirmed previous findings based on subjective measurement,” Su says. “People think children and adolescents sleep later and we found this. And, during middle age people sleep less and our findings support that objectively.” Additionally, sleep duration is increased for those age 60 and older, he says.

In this more objective assessment of sleep parameters based on movement, investigators found again that generally nighttime sleep decreases as our age increases, although they saw the U shape emerge as sleep duration dropped significantly from about age 10 into the 50s and get a little longer after that. Studies of a large population of Japanese and French residents have shown a similar pattern. The increased sleep time later in life may reflect the reality that most Americans still retire in their 60s and simply don’t need to get up as early. Health problems and not feeling well may be another reason older American sleep longer, the investigators write, and more study is needed to look at those potential associations.

Sleep efficiency—basically the time you actually sleep versus the time you have dedicated to sleep, with 85% considered good—also tends to decrease with age, although the investigators found it stabilized from ages 30 to 60, indicating that adults maintain sleep efficiency for a long period, but may get the least sleep in their busy middle age.

“Traditionally people think sleep efficiency goes straight down with age, but we did find there is a stable period, from ages 30 to 60 years old, that you have quite stable sleep efficiency,” Wang says.

They found females generally sleep longer than males across their lives but tend to go to sleep later, particularly as they get older, and get interrupted more, particularly in taking care of children, but still net about four minutes more sleep than males.

The investigators were surprised to find that males and females were equally sleep efficient since females are more likely to report worse sleep quality and more sleep disturbances. While more study is needed to understand sex differences in sleep, sex differences should already be considered in studies and treatment of sleep health, the investigators write. Females’ sleep onset time tended to be about five minutes later than males, but before age 20 males went to bed later.

Young American adults about age 20 had the latest CTSO, or clock time for sleep onset, which is considered the time participants actually went to sleep, and high school students had the biggest weekday/weekend differences between the time they went to sleep and awakened. Those weekday/weeknight differentials only happened in school- and work-age individuals with children ages 14-17 showing the biggest differences.

For school-age children the CTSO was 9:30 pm, which was not surprising, but that time got later though high school and hit the peak around age 21 when the average time was closer to 11:30 pm, McCall says, adding he thought it would actually be even later. The investigators note that 25% of children ages 6 to 13 had a CTSO close to 11 pm.

While there may be societal reasons, like social demands and use of electronic media right before bedtime, these patterns also may reflect biological changes that occur during adolescence, they write. But the collective impact may be fatigue, behavioral problems and less academic success, they write.

As they move into their 20s, a lot of people transition to work life and the CTSO begins to reverse, he says. ”You hit the years where you are raising children and you are working and then what happens around the time of retirement? Your whole schedule begins to change,” McCall notes, and the CTSO gets later again.

Black Americans tended to have some of the most troublesome sleep parameters, generally going to sleep later, sleeping less hours and less efficiently, than other races including Mexican Americans, the investigators found.

In the apparent first report of its kind, Mexican Americans had the earliest sleep onset and longest sleep time but were not necessarily efficient sleepers. The findings point to the need for more research on racial disparities in sleep that take into account social and cultural factors as well as biological and genetic factors, the investigators say.

“One thing we cannot overestimate is the impact of sleep,” notes Wang. Without sufficient sleep, “you overuse your body,” she says, and your ability to adjust to less sleep decreases with age.

While insufficient sleep itself is a risk factor for a myriad of health problems from obesity to diabetes to cardiovascular disease, it may also be an indicator of disease, says McCall who says how we sleep is like a “canary in a coal mine” and that sleep complaints may be an indication of mental or physical health problems.

“I think what these sleep parameters mean in terms of people’s health is that if you are a physician or other provider and patients comes in with some kind of complaint about their sleep, you need to interpret what they tell you in light of their stage in life and what their likely sleep patterns are going to be,” McCall says.

For example, with a 22-year-old complaining of insomnia, some of his first questions would be what time do you go to bed and how long did it take to fall asleep.

Our more natural instincts across our lifetime likely are to go to sleep when it gets dark and wake up with the light, but life and obligations interfere with following the more natural 24-hour cycle of our internal circadian clocks, the investigators say.

Babies’ sleep patterns tend to follow these more natural circadian rhythms, Su notes. The frontier days, before television, the internet and mobile phones, likely had more of us sleeping like babies, McCall says.

“Is it in the biology of a 20-year-old to always go to bed late or is it due to the fact that they have friends that they are engaged with and they have parties and college keg night? I think there is a lot of societal influence here,” McCall says. “Life gets in the way.”

The Georgia Prevention Institute, which has a longstanding focus on cardiovascular disease prevention, also has been using NHANES to look at how circadian misalignment, that can result from sleeping poorly, plays a role in human disease.

The National Sleep Foundation says healthy adults need seven to nine hours of sleep, those over 65 need seven to eight hours and babies, young children and teens need more sleep than healthy adults to enable growth and development. Newborns, who rarely sleep through the night, need 14 to 17 hours including naps.

Xanyan Xu, a graduate student in genomic medicine at AU studying with Wang is a coauthor of the study. Co-author Dr. Xinyue Li, a biostatistician in the School of Data Science at City University of Hong Kong, used an algorithm she developed to better assess actual sleep time using information provided by the accelerometer.

Almost half of Americans sleep with pets