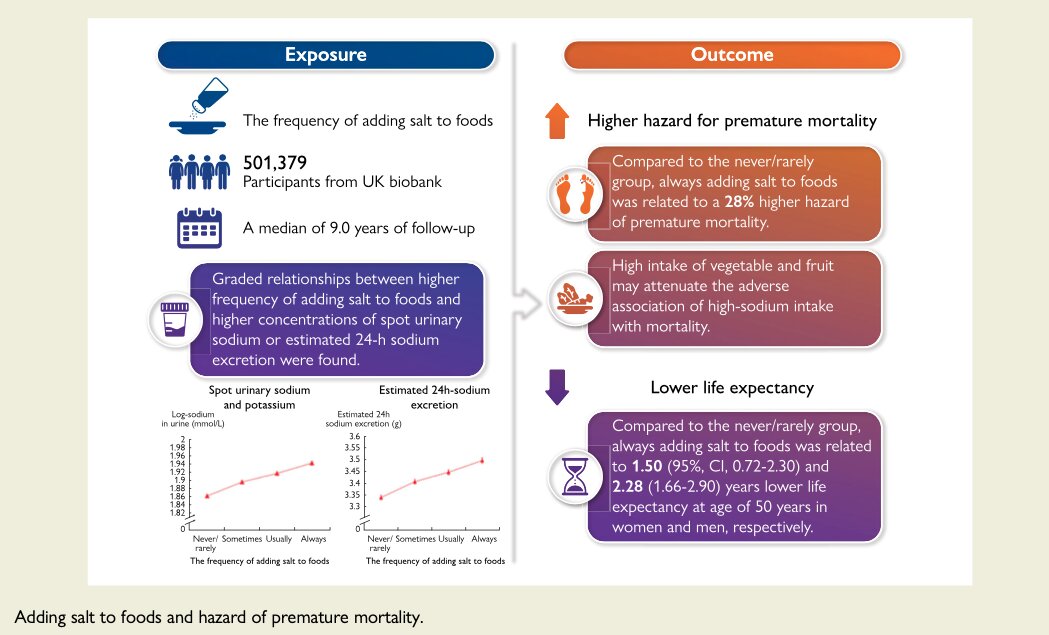 People who add extra salt to their food at the table are at higher risk of dying prematurely from any cause, according to a study of more than 500,000 people, published in the European Heart Journal today.

Compared to those who never or rarely added salt, those who always added salt to their food had a 28% increased risk of dying prematurely. In the general population about three in every hundred people aged between 40 and 69 die prematurely. The increased risk from always adding salt to food seen in the current study suggests that one more person in every hundred may die prematurely in this age group.

“To my knowledge, our study is the first to assess the relation between adding salt to foods and premature death,” he said. “It provides novel evidence to support recommendations to modify eating behaviors for improving health. Even a modest reduction in sodium intake, by adding less or no salt to food at the table, is likely to result in substantial health benefits, especially when it is achieved in the general population.”

Assessing overall sodium intake is notoriously difficult as many foods, particularly pre-prepared and processed foods, have high levels of salt added before they even reach the table. Studies assessing salt intake by means of urine tests often only take one urine test and so do not necessarily reflect usual behavior. In addition, foods that are high in salt are often accompanied by foods rich in potassium, such as fruit and vegetables, which is good for us. Potassium is known to protect against the risk of heart diseases and metabolic diseases such as diabetes, whereas sodium increases the risk of conditions such as cancer, high blood pressure and stroke.

For these reasons, the researchers chose to look at whether or not people added salt to their foods at the table, independent of any salt added during cooking.

“Adding salt to foods at the table is a common eating behavior that is directly related to an individual’s long-term preference for salty-tasting foods and habitual salt intake,” said Prof. Qi. “In the Western diet, adding salt at the table accounts for 6-20% of total salt intake and provides a unique way to evaluate the association between habitual sodium intake and the risk of death.”

The researchers analyzed data from 501,379 people taking part in the UK Biobank study. When joining the study between 2006 and 2010, the participants were asked, via a touch-screen questionnaire, whether they added salt to their foods (i) never/rarely, (ii) sometimes, (iii) usually, (iv) always, or (v) prefer not to answer. Those who preferred not to answer were not included in the analysis. The researchers adjusted their analyses to take account of factors that could affect outcomes, such as age, sex, race, deprivation, body mass index (BMI), smoking, alcohol intake, physical activity, diet and medical conditions such as diabetes, cancer and heart and blood vessel diseases. They followed the participants for a median (average) of nine years. Premature death was defined as death before the age of 75 years.

As well as finding that always adding salt to foods was linked to a higher risk of premature death from all causes and a reduction in life expectancy, the researchers found that these risks tended to be reduced slightly in people who consumed the highest amounts of fruit and vegetables, although these results were not statistically significant.

“We were not surprised by this finding as fruits and vegetables are major sources of potassium, which has protective effects and is associated with a lower risk of premature death,” said Prof. Qi.

He added that “because our study is the first to report a relation between adding salt to foods and mortality, further studies are needed to validate the findings before making recommendations.”

In an editorial to accompany the paper, Professor Annika Rosengren, a senior researcher and professor of medicine at the Sahlgrenska Academy, University of Gothenburg, Sweden, who was not involved with the research, writes that the net effect of a drastic reduction in salt intake for individuals remains controversial.

“Given the various indications that a very low intake of sodium may not be beneficial, or even harmful, it is important to distinguish between recommendations on an individual basis and actions on a population level,” she writes.

She concludes that “classic epidemiology argues that a greater net benefit is achieved by the population-wide approach (achieving a small effect in many people) than from targeting high-risk individuals (a large effect but only achieved in a small number of people). The obvious and evidence-based strategy with respect to preventing cardiovascular disease in individuals is early detection and treatment of hypertension, including lifestyle modifications, while salt-reduction strategies at the societal level will lower population mean blood pressure levels, resulting in fewer people developing hypertension, needing treatment, and becoming sick. Not adding extra salt to food is unlikely to be harmful and could contribute to strategies to lower population blood pressure levels.”

A strength of Prof. Qi’s study is the large number of people included. It also has some limitations, which include: the possibility that adding salt to food is an indication of an unhealthy lifestyle and lower socio-economic status, although analyses attempted to adjust for this; there was no information on the quantity of salt added; adding salt may be related to total energy intake and intertwined with intake of other foods; participation in UK Biobank is voluntary and therefore the results are not representative of the general population, so further studies are needed to confirm the findings in other populations.

Prof. Qi and his colleagues will be carrying out further studies on the relation between adding salt to foods and various chronic diseases such as cardiovascular disease and diabetes. They also expect potential clinical trials to test the effects of a reduction in adding salt on health outcomes.

Hold the salt to help your heart

Provided by
European Society of Cardiology

Citation:
Adding salt to your food at the table is linked to higher risk of premature death (2022, July 11)
retrieved 11 July 2022
from https://medicalxpress.com/news/2022-07-adding-salt-food-table-linked.html