What is that one flavouring ingredient that is indispensable to any meal? No prizes for guessing, of course, it’s salt. You may include or exclude any other seasoning, even chilli, but salt? No way. Most of us tend to top up our food with an extra sprinkling of salt on the table. It’s just ironic that the same food that is the prime source of flavouring may also harm your health if consumed excessively. Health experts have been warning us against over-consumption of salt to avoid heart-related issues and high blood pressure. But did you know that adding salt to your cooked meal may cut back your life by more than a year!? Shocking but true.

If recent research is to be believed, adding extra salt to your food after it is already cooked can shorten life expectancy by 1.5 years and by 2.28 years in men. The study was published in European Heart Journal and was conducted by a team of researchers led by Professor Lu Qi, of Tulane University School of Public Health and Tropical Medicine, New Orleans, USA.

The researchers analysed data from more than 5 lakh people who participated in the UK Biobank study. It was seen that compared to those who never or rarely added salt, those who always added salt to their food had a 28% increased risk of dying prematurely.

Prof. Qi said, “Adding salt to foods at the table is a common eating behaviour that is directly related to an individual’s long-term preference for salty-tasting foods and habitual salt intake. In the Western diet, adding salt at the table accounts for 6-20% of total salt intake and provides a unique way to evaluate the association between habitual sodium intake and the risk of death.”

The study is an eye-opener for all of us who love our meals a bit salty. But should we take in this information with a pinch of salt or pay heed to it and watch our salt intake? We have experts’ suggestions about what should be the optimal salt intake in our daily diet. 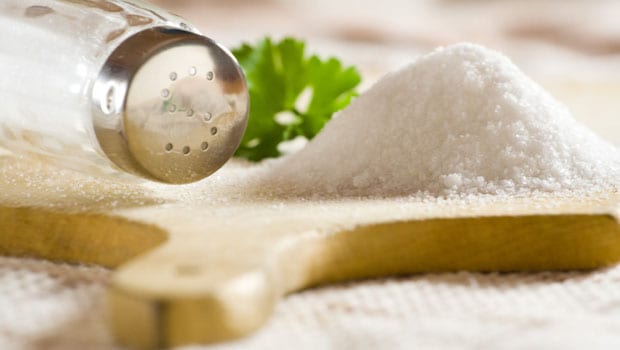 How Much Salt You Should Have In A Day:

Priya Bharma, chief nutritionist at the Sri Balaji Action Medical Institute says, “Average consumption of salt in a day should be 2400 milligram. But if someone is deficient, they can have an additional 1.5 milligram of salt in a day.” The World Health Organization (WHO) suggests not to consume more than five grams of salt in a day.

Nutritionist Rupali Datta throws more light on it. She says, “One should not have more than half a tsp of added salt in a day. I call it added salts because there is sodium in almost every food.”

She further advises cutting down on processed and packaged foods as they contain high amounts of salt and preservatives which can increase sodium levels in the body. High sodium in the body is not good for blood pressure levels.